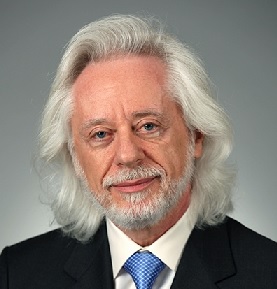 The first ever such USUBC award was given to Bleyzer in September 2012 for his outstanding contribution, over the past 20 years, to the economic and business development of Ukraine, to the development of the SigmaBleyzer private equity management firm, to the significant membership growth of the U.S.-Ukraine Business Council (USUBC) and to the prosperity of the people of Ukraine.

Born in Kharkiv, Ukraine, Mr. Bleyzer was raised and educated in the Soviet Union, graduating from Kharkiv Institute of Radioelectronics with a Master of Science in digital electronics and quantum physics. His career took him to Russia, Ukraine, Uzbekistan and Turkmenistan, before he came to the U.S. in 1978 where he became an American citizen. Mr. Bleyzer then embarked on a career in finance and management, which over 15 years at Exxon and Ernst & Young included a variety of operational, management and executive positions in Texas, Louisiana and Europe.

Mr. Bleyzer co-founded SigmaBleyzer Investment Group, LLC in 1994. Since its founding, SigmaBleyzer has invested primarily in the emerging markets of Eastern Europe and the Former Soviet Union. SigmaBleyzer’s approach to private equity investments is operational level value creation, combined with advocacy of the economic reforms in emerging markets provided by The Bleyzer Foundation.

With offices in Houston, Kiev, Kharkiv, Bucharest, Washington and Amsterdam, SigmaBleyzer has raised and invested approximately one billion dollars in over 100 companies in a variety of industry sectors and have realized over 90 exits. SigmaBleyzer currently manages approximately $500 million in assets located in Ukraine and Romania. SigmaBleyzer’s back-office has been located in Houston, Texas since inception in 1994 and provides institutional quality Investor Relations, accounting, tax and reporting services to over 100 investors in the United States, Europe, Middle East and South America.

Patrick Sweet, President, SASI,. (Sweet Analysis Services Inc), a long-time member of USUBC, who serves as the USUBC Secretary-Treasurer and a member of the Executive Committee read the following USUBC resolution:

'On behalf of the Executive Committee of the Board of Directors of the U.S.-Ukraine Business Council (USUBC), representing the over 195 members, I hereby certify the following resolution was approved by unanimous vote of the USUBC executive committee:

WHEREAS: Michael Bleyzer was born in Kharkiv, Soviet Ukraine, and as a young college student began dreaming about what life could be in a democratic country where one could develop and use their gifts and talents in a creative, positive way;

WHEREAS: Michael Bleyzer soon decided he wanted to live in the United States and started working on a plan to move to the U.S.  After several tough and difficult years Michael, his wife Natasha, and their small daughter, left for the U.S. in late 1978;

WHEREAS: The Bleyzer family soon landed in Houston, Texas, with only a few suitcases and no funds. Bleyzer quickly developed a highly successful career with Exxon for over 12 years and then with Ernst & Young;

WHEREAS: In the early 1990's Michael and his brother Lev, decided to end all of their business activities in the US and open an office in Kharkiv, Ukraine, to work in their motherland in the field of economic and business development;

WHEREAS:  In 2001 The Bleyzer Foundation was created as an economic think tank to assist in the economic development of Ukraine and later the DAAR Foundation was organized by the Bleyzer family to implement educational, cultural and humanitarian projects in Ukraine;

WHEREAS:  In 2001 SigmaBleyzer became a member of the U.S.-Ukraine Business Council (USUBC) and believed a large and effective business council was needed in Washington, D.C. to be a strong international voice for business in Ukraine.  Since 2007 SigmaBleyzer has been the largest corporate sponsor of USUBC and has watched USUBC grow from 20 members to almost 200 members;