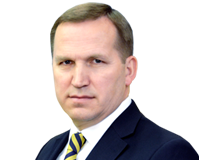 Olexander Motsyk served as Ambassador of Ukraine to the USA
from 2010 to 2015.
Prior to that he served as Ukrainian ambassador to Poland and Turkey.
Ambassador Motsyk received DSA Award on April 16, 2015 on USUBC farewell dinner before he left to Kyiv, for his contribution in development of strong business relations between Ukraine and the United States.

Oleksandr Motsyk  took over as Ukraine’s Ambassador to the United States on June 11, 2010.

Motsyk was born on May 3, 1955, in the village of Horodets Volodymeretskoho, in the Rivne region of the Ukraine. In 1981 he graduated from Kyiv State University’s School of International Relations, Department of International Law, as an English language interpreter and international law specialist.

Motsyk entered the diplomatic service while Ukraine was still part of the Soviet Union, via the Ministry of Foreign Affairs of Ukraine (MFA), initially serving as Third Secretary, Consular Section, from July 1981 to May 1985. He then became Third and Second Secretary of International Organizations (May 1985 to April 1987); Second and First Secretary of the Personnel Department of the MFA (April 1987 to September 1990); and Director First Secretary of the Department of Treaties and Legal Affairs of the MFA (September 1990 to April 1992).

From April 1992 to August 1995, Motsyk served as Second and First Secretary, and Counselor, at the Permanent Mission of Ukraine to the United Nations in New York. From August 1995 to November 1997, he was Director and Chief-of-Control of the MFA’s Contractual and Legal Department. In November 1997, he was appointed Ukraine’s Ambassador to Turkey, a post he held for four years.

From September 1999 to November 2004, Motsyk was Ukraine’s Representative to the Black Sea Economic Cooperation. In Ukraine’s MFA, he served as Deputy State Secretary (November 2001 to July 2003), Deputy Minister of Foreign Affairs (July 2003 to July 2004), and First Deputy Minister of Foreign Affairs of Ukraine on European Integration (July 2004 to February 2005).

From February to December 2005, Motsyk held the position of First Deputy State Secretary and First Deputy Head of the Secretariat of the President of Ukraine. He was then appointed as Ukraine’s Ambassador to Poland, a post he held until June 2010.

Motsyk and his wife, Natalia, have two daughters. He speaks English, Russian and Polish.