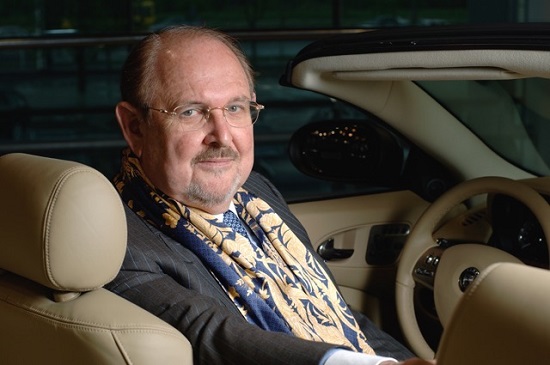 WASHINGTON, D.C. --“My one guidingprinciple in life is that one has to care to make a difference. I came toUkraine more than twenty years ago because I cared about the country and wantedto make a difference here.” – John Hynansky, President/Owner Winner Group ofCompanies.

Today, perhaps every Ukrainian atleast remotely interested in cars knows Winner – one of the biggest carimporters in Ukraine.  On November 17th, 2014 the company passed its 22nd anniversaryin Ukraine. Just a little younger than independent Ukraine, Winner has securedits place as one of the founders of the importer vehicle industry in Ukraine asthe official importer and representative of Ford, Volvo, Jaguar, Land Rover andPorsche in Ukraine.

It all started with an idea in1991 during the Wimbledon tennis tournament when one of Ford Motor Company`stop executives invited John Hynansky – the owner of multiple Ford dealershipsin the US to open one more dealer, but this time in Ukraine.
In the picture: Mr. John Hynansky, President & CEO of Winner Group ofCompanies

BORN INTOA FAMILY OF UKRAINIANS WHO IMMIGRATED TO THE USA

John Hynansky was born into afamily of Ukrainians who immigrated to the US shortly after World War II. Helived the American Dream starting sales of cars in 1963 and eventually owningautomobile dealerships throughout Delaware and Pennsylvania. A successfulbusinessman with almost thirty years of automotive business experience made oneof the most important decisions of his life: to build a company that will makea real contribution to the development of Ukraine.

“There`s always a thin linebetween healthy optimism and lack of judgment and I perfectly understood whatwas happening at that moment in Ukraine, but it was too early to think aboutconsequences. There was nothing left but to take up the challenge of doingsomething meaningful. For the country. For myself. For that era. I wanted tomake a contribution to the new Ukraine” said Mr. Hynansky. 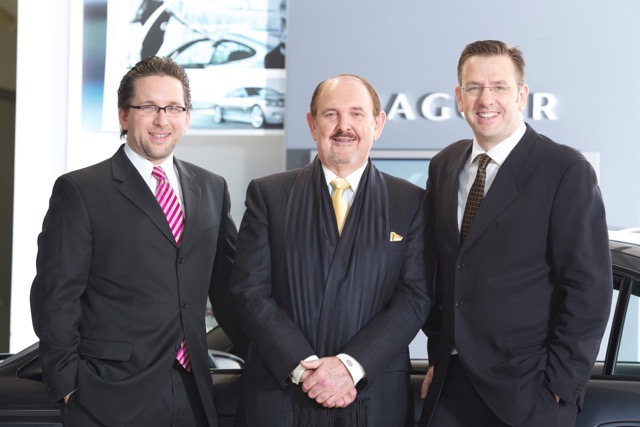 Committedto transparent, Western business principles and with a long-term investmenthorizon, Mr. Hynansky`s next step was to hire Bohdan Kulchyckyj as GeneralDirector and beginning the search for like-minded people to grow the company.In 1991 John Hynansky and Bohdan Kulchyckyj made their first visit to Ukraine.

“More than twenty years ago it washard to imagine the challenges facing a business in Ukraine”, said BohdanKulchyckyj,  “Virtually everything we now take for granted in our day-to-dayoperations was non-existent then. It was nearly impossible to find  realestate.

The only thing we clearlyunderstood back then was that we wanted to build a successful business model inUkraine based on Western principles of customer satisfaction, transparency andaccountability.” 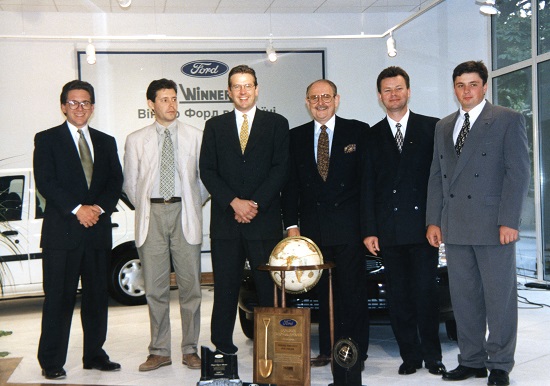 In 1992 the company opened itsfirst Ukrainian office and was appointed as the official importer of Fordvehicles in Ukraine. In the same year the first Ford service station beganoperations – the biggest in Ukraine at the time.

The company began with just onebrand, Ford, which served as the cornerstone in the foundation of what Winneris today. In 1997 Winner opened the first authorized Ford showroom in Kyiv -Winner Ford Kyiv.
Picture: Opening of “Winner Ford Kyiv” Showroom 1997

“No matter what people told me, Ialways believed in the country. Although simple by today`s standards, Winner FordKyiv was a milestone for us and bolstered our commitment to developing thebusiness. It was also the launching pad for the company`s growth” says BohdanKulchyckyj.

Winner introduced Volvo to Ukrainein 1999. Then in 2004, when Ukrainians` desire for freedom of choice reachedits peak, the company won tenders held by the world’s leading automotivemanufacturers and became the official importer in Ukraine for Jaguar, LandRover, andPorsche.

Picture: Winner Automotive Dealership, Opened 2006
Theopening of Winner Automotive, a new multi-brand showroom, in 2006, marked thenext stage of development of Winner in Ukraine. From the beginning it was astandout in the industry and remains a flagship Dealership even day. The storyof its construction begins in 1998, when Winner first purchased the land.

Construction began in 2003 andlasted three years. In its tradition of transparency and fighting corruption, Winnerchose to take the long, time-consuming route in building the facility. Everyrequired permit was legally acquired through meticulous, painstaking work.

The two-story, 8,500 sqm. facility opened in 2006 and includes a 5,000 squaremeter service center. Five brands were meticulously serviced at WinnerAutomotive, seven days a week: Ford, Volvo, Jaguar, Land Rover and Porsche.Winner Automotive is not only an impressive architectural project, but a primeexample of an effectively operated dealership.

In 2006, Winner delivered 7,500cars to happy customers – twice the number of the previous year. By 2007,company had delivered over 25,000 cars in Ukraine since its inception. In theyears that followed, Winner would break its own record four times over in theface of very difficult economic conditions.

In 2008 the Automotive Industry inUkraine faced its most serious challenge due to the global economic collapse.“2008 was an exciting year” said John Hynansky. “3,000 cars were left in ourwarehouse, and we saw a total market decline of 76 percent. It seemed to usthat we were about to collapse. But what does not kill us makes us stronger,and we`re again in the game”.

The Winner team became crisismanagement experts, re-defining its business model, never lowering its rigorousexpectations and always choosing the best people on the job market. Thisapproach paid off well during the crisis years ensuring a future for Winnerwhile industry sales plummeted 3.6 times in 2009, very close to a completecollapse of the Automotive Industry in the country.

“We decided to pay back loansimmediately which required a quick reduction in inventory”, saysKulchyckyj.  By reducing its debts and aging inventory, Winner managed todeliver new cars quicker than its competitors. “Following the crisis period,all-new models of Fiesta, Focus, Mondeo and Range Rover Evoque turned out to bea big success.” says Kulchyckyj.

As a result, during the year thatfollowed, the company doubled sales while the Industry languished at anear-zero growth rate. By that time Winner`s portfolio included 58 independentdealerships throughout Ukraine.

In May 2009, despite the turbulent times and continued economic crisisWinner completed construction of its new distribution center in Kapitanivka.

The campus was designed to deliveran unparalleled experience for employees. Offering a swimming pool, cafe andfitness center available for use by employees during the week or on weekends.

A jewel in the crown isPre-delivery Inspection Center (PDI) for cars received from the manufacturersoften cited as a model for importer operations.

2011 was a year of newachievements for the company.  All branks represented by Winner in Ukrainereached new heights.  The largest victory in 2011 was the increase inFord's market share to 5%.

This was the highest figure ever for Fordin Ukraine. Jaguar, Land Rover, Volvo and Porsche set another important recordby reaching a combined share of 21.7% in the premium segment and, consequently,significantly boosting sales. In other words, every fifth premium carregistered in Ukraine in 2011 belonged to a brand represented by Winner.

The company significantly expandedthe PDI Center in order to accommodate the growing business, and raise thelevel of aftersales customer service. Construction of a new dealership, PorscheKyiv Airport on Boryspil highway, was in full swing. By the end of 2012, Winnerhad delivered more than 75,000 vehicles, since inception, and celebrated its20th anniversary in Ukraine.

The company and John Hynanskypersonally engages in philanthropy both in Ukraine and abroad. Since Winner`sinception in Ukraine more than 22 years ago, Mr. Hynansky has personallyengaged in philanthropic initiatives aimed at providing for disadvantagedchildren and families. Among the numerous recipients of Winner`s support isHope & Homes for Children in Ukraine, an organization whose vision is toone day see the end of orphanages by securing a family for every orphan inUkraine.

Winner also regularly supports Klitschko Brothers Foundation, which has themission of supporting the development of Ukrainian youth across the country. In2006 at the Person of the Year world ceremony in Ukraine Mr. John Hynanskyreceived an international award as philanthropist and patron of the arts.

In 2012, John Hynansky was awardedthe Salute to Dealers award by Ford Motor Company in recognition of Winner`sextraordinary work with the Ukrainian Community. In 2013, Winner completelyrenovated a handicapped children’s home in the town of Ladyzhyn. More recently,Winner is supporting the volunteer effort in the eastern Ukraine and Crimeanrefugee families in Kyiv.

IN 2013,DESPITE NEGATIVE TREND IN MARKET WINNER SOLD 14,721 VEHICLES 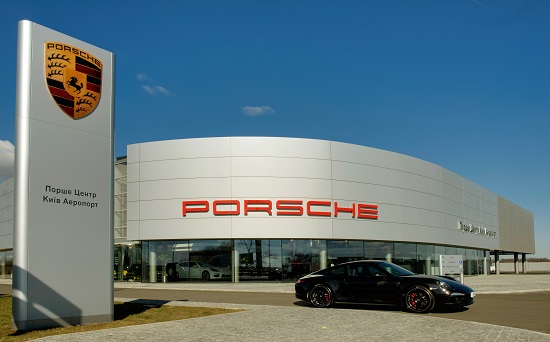 In 2013, despite the negative trend in the automotive market in general,Winner sold 14,721 vehicles, up almost 8% from 2012. Ford and Land Roverachieved the highest market share in the history of the brands in Ukraine, at5.2% in the overall industry and 12.9% in premium segment respectively. Premiummarket share of Winner brands reached the highest figure in history: 26.7%.

2014, the year of the Revolutionof Dignity, and the illegal annexation of Crimea by the Russian Federation, wasa difficult year for the Ukrainian economy in general. The massive Hryvniadevaluation effectively wiped out the populations disposable income.

By the end of the year the totalAutomotive Industry was off 54%. Again the Winner team went into crisis modeand right-sized the company and inventory to ensure its solidity in the market.

In January 2014, Winner opened its new state of the art facility Porsche CenterBoryspil Airport financed by the Overseas Private Investment Corporation (OPIC)and highlighted as an OPIC success story.  By the end of the first quarterof 2015, the crisis measures Winner implemented effect as the company returnedto profitability in a market that was now back to 1990’s numbers in terms ofvehicles sales.

Winneris currently driving over a dozen internal projects including the developmentof a “Customer Experience” team, the overhaul of its dealer network, and theexpansion of Winner College in preparation for the bright future we believeUkraine has in store. 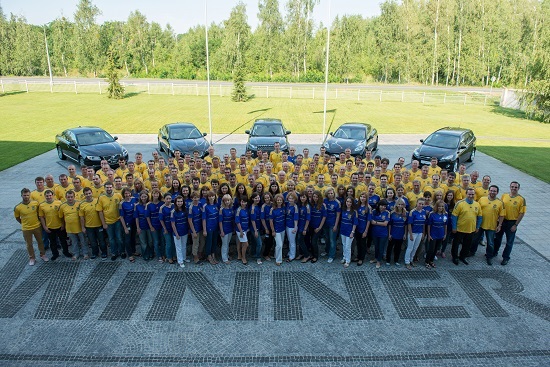 TodayWinner in Ukraine is driven a dedicated, professional management team and 460employees united by love for their country, and faith in Ukraine`s future.

“I am proud that Winner has becomea highly successful company in Ukraine. I am even more proud that our companyis recognized as a leader and an example for the automobile industry inUkraine, not only in terms of sales, but in terms of management and developmentof human capital” – John Hynansky.

Today, Winner represents more thanjust a financially secure business. It is a company that has successfullycombined Western management principles with a continuous commitment to theUkrainian Community.