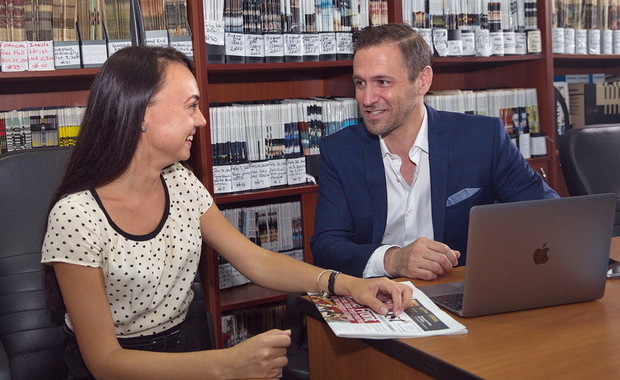 Chénier replaces Nataliya Bugayova, a former Kyiv Post staff writer who held the CEO position for 17 months before relocating to America at the end of December. Kyiv Post commercial director Alyona Nevmerzhytska served as an acting CEO for the last seven months.

Chénier, 43, has experience in communications, advertising and video production. He has spent most of the last 20 years living in Kyiv.Born in Alexandria, Canada, Chénier studied graphic design in St. Lawrence College in Ontario. He started his career in western Canada in 1996 as art director for the Phoenix Advertising Group. He later made the move to Ukraine in 2000 to work for Bates Advertising, the world’s eighth-largest advertising agency, and in 2003 for J. Walter Thompson Russia for two years.

Chénier returned to Kyiv in 2005 to launch the 5th Element advertising agency. He was marketing and digital director of MTV Ukraine in 2008-2009. After that, he returned to Canada and worked as global creative director in a gaming corporation.In 2013, Chénier founded Titanium Presentations, a company that makes professional presentations for top-level businesses. This spring he decided to sell his shares in Titanium to his partners in order to concentrate on new challenges.While at Titanium,Chénier produced a series of promotional videos “Ukraine. Open for U” on behalf of the government. They proved popular, getting millions of views online.

Chénier has been a Kyiv Post reader since 2000 and was several times interviewed by the newspaper's journalists."Everybody knows the Kyiv Post and the Kyiv Post knows everybody,” Chénier says.In his new position, Chénier is responsible for all aspects of the commercial operation of the news organization, including sales, marketing, digital development, budgeting and events.

The Kyiv Post currently employs 15 people in its commercial division."We had a couple of outstanding candidates, but Luc's creativity and connections, as well as his proven ability to sell and run a business tipped the search in his favor," Zahoor, who bought the Kyiv Post in 2009, said. "He also understands and respects the role of the Kyiv Post in the community, including our fundamental principles of journalistic independence and making the organization commercially viable."

The Kyiv Post also has 23 people in the news division led by chief editor Brian Bonner, who directed the search for the new CEO.The Kyiv Post will soon be launching a new website that has been under development for several months.

Chénier said he will seek additional resources and staff so that the editorial side of the newspaper can develop more video content. Chénier also emphasizes the need to connect more to Ukraine's international diaspora, estimated to number at least four million people in many nations, to make Kyiv Post’s reach much more global.He considers the Kyiv Post, in its 21st year of business, to be “a very rock-solid platform” and praises its reporting and its role in the community.

Describing his management style, Chénier speaks of the importance of the art of the pivot and agile communications in order to stay ahead of the curve of the market in a business environment as challenging as the one in Ukraine.

When introducing himself to the Kyiv Post staff on Aug. 1, Chénier said that he believed in the philosophy of “slow is fast” and that making deep changes requires time. "Let’s take a look in one year together and see how much we’ve improved from where we came from today,” Chénier told the staff.