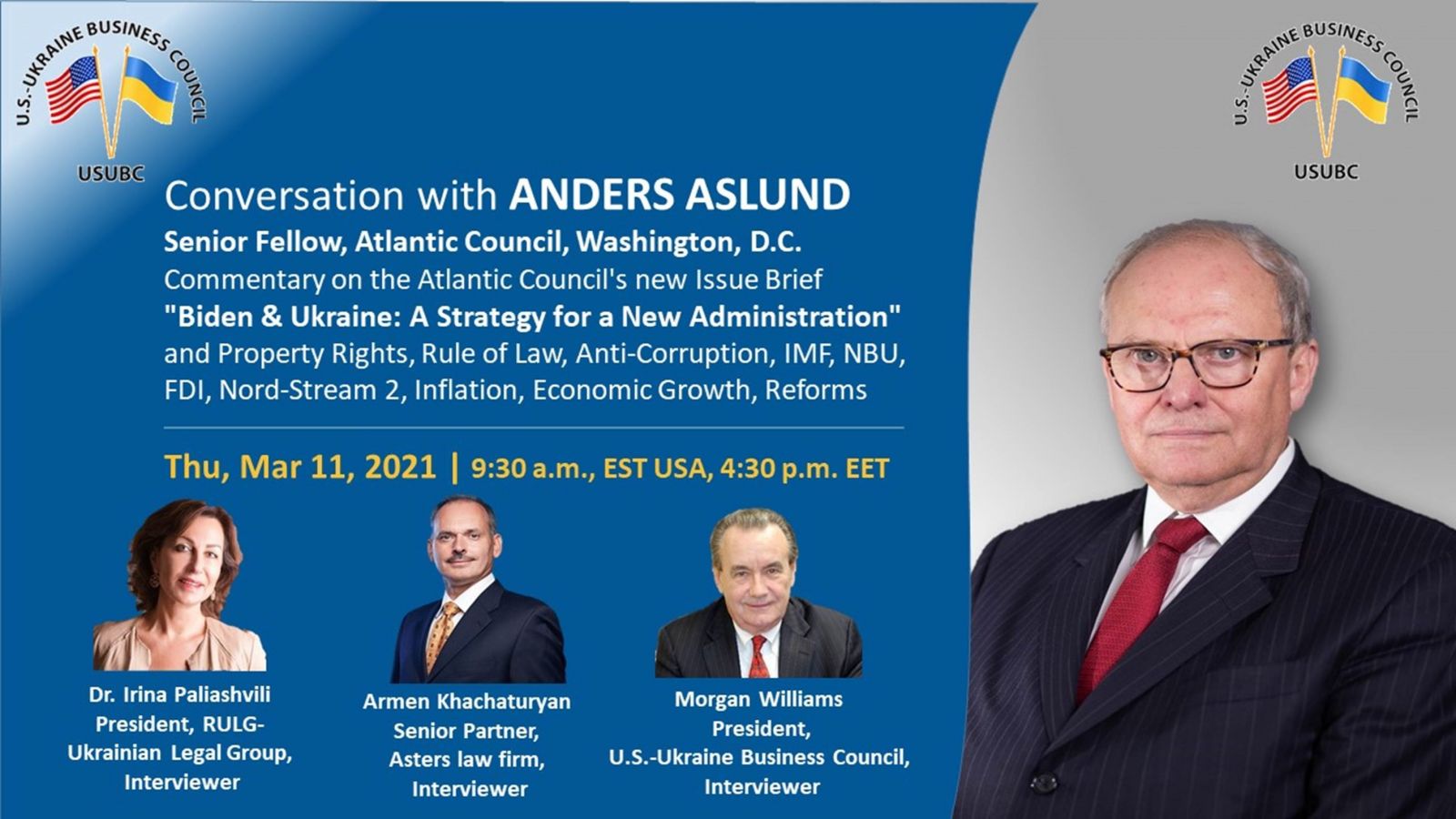 In Ukraine, there is an alarming trend of health deterioration in the working age population. Amidst other serious conditions, the levels of incidence and prevalence of non-communicable diseases (NCDs) are increasing every year in all age groups, according WHO Europe . The challenges posed by NCDs have only reached the Ukrainian political agenda recently. In 2010, the Committee on Economic Reform urged the government to raise living standards by transforming healthcare investments into the Programme for Economic Reform 2010-2014. The State Programme for Activation of Economic Development has called for similar measures and, in 2011, the president approved the World Health Organisation’s framework “Health 2020: Ukrainian Dimension” . The latter is designed to implement strategic priorities in public healthcare, which range from preventative measures for non-communicable diseases, to minimisation of risk factors through inter-sectorial approach and investment in priority areas of the public health system such as primary healthcare and family medicine . Whilst these policies are important milestones for Ukraine, joined-up action is required at governmental levels to secure investment for healthcare programmes that both improve the health status of the workforce and promote higher participation in the labour market. In addition to the ageing phenomenon, the pension crisis and the growing burden of diseases, which are challenging systems throughout  Europe, Ukraine has yet other battles to win. Of particular concern is the problem of premature mortality. The life expectancy is only 68.2 years and constantly decreasing, that is ten years less than average rates in the EU. Unless immediate action is taken, productivity, labour market participation and public health in Ukraine are likely to decline still further deepening the economic recession and making inclusive economic move difficult.

The impact of non-communicable diseases. A European perspective.

Yet Ukraine is not an isolated case. The EU member states have been long bearing the burden of non-communicable diseases. MSDs (musculoskeletal disorders) are the leading chronic condition that is declining the health of the European workforces. Covering over 200 conditions that affect the muscles, joints, tendons, ligaments, peripheral nerves and supporting blood vessels, MSDs cause pain and functional impairment to sufferers .

According to research conducted by the independent UK think-tank The Work Foundation, which is leading the Fit for Work Europe Coalition – an initiative driving policy and behaviour change for workers with MSDs – 44 million workers in Europe are living with an MSD, which was caused by their work . Their condition is putting their jobs at risk because of physical and psychological disabilities, which can result in temporary, or permanent, work incapacity, as well as placing an additional burden on welfare systems, employers, taxpayers, and ultimately the economy (please see the infographic at page 5-6. The European Commission estimates that MSDs account for 50 per cent of all absences from work lasting three days or longer and for 60 per cent of permanent work capacity . MSDs also cost Europe billions of euros. The direct and indirect costs of MSDs have been estimated at €240bn a year, that is up to 2% of the GDP. “These are alarming figures by any standards and are only likely to grow. Early diagnosis and intervention can help sufferers of MSDs to stay fit and stay in work longer, which will have not only a positive impact on them, but also on Europe’s economy and society in general”, says Prof Stephen Bevan, Founding President of Fit for Work Europe and Director of the Centre for Workforce Effectiveness at The Work Foundation.

The Fit for Work Europe Coalition has been advocating for early intervention to MSDs since 2007 when it released its first report on the impact of MSDs to the labour market in the UK. Ever since, research has been conducted in more than thirty countries in Europe, through The Work Foundation, and various experts and key opinion leaders joined the movement. The Coalition is led by four Co-presidents – Prof Stephen Bevan, who is actually the Founding President of Fit for Work Europe and Director of Centre for Workforce Effectiveness at The Work Foundation, Dr Antonyia Parvanova MEP, Dame Carol Black, Expert adviser on health and work at the Department of Health in England, and Prof Paul Emery, Director at the Leeds Institute of Rheumatic and Musculoskeletal Medicine within the University of Leeds. Currently, Fit for Work Europe is working on driving change for workers with MSDs through evidence-based research commissioned independently in three major areas – policy, clinical, health economics.

Yet Fit for Work Europe is not the only programme standing up for workers with chronic conditions such as MSDs. Similar alliances such as the Bone and Joint Decade and the European League against Rheumatism (EULAR) have joined forces  to position musculoskeletal conditions as a public health issue. For instance, the European League against Rheumatism (EULAR) established in 2009 the “European Parliament Interest Group on Rheumatic and Musculoskeletal Diseases” . Dr Antonyia Parvanova MEP, who is a member of this interest group, as well as Co-president to the Fit for Work Europe Coalition, Bulgarian Paediatrician and Public Health policy expert, warned in an interview for the Parliament Magazine that “by 2030, around half of the population of several member states will have at least one work-limiting chronic health condition” and called for “joined-up budgeting between ministries and cross-governmental collaboration” to improve the health of workers and help them remain in work longer. Similar issues were debated by a panel of high-level experts at a summit in Brussels, organised in October 2013 by the Fit for Work Europe Coalition in partnership with the European Economic and Social Committee and with the official endorsement of the Lithuanian Presidency of the Council of the European Union. To name just a few, Dr Roberto Bertollini from WHO Europe, the Health Minister of the Republic of Lithuania V. P. Andriukaitis and Gianni Pittella, the Vice-President of the European Parliament, stressed that, in the context of an ageing population, Europe must deliver better healthcare for workforces to support employment and grow the economy.

Practical solutions to this challenge are emerging and are already being tested in some member states like Spain, Sweden, Latvia and the UK, but they struggle to be given political priority. For instance, a successful two-year trial of an early intervention clinic for people with MSDs that ran in Madrid, Spain, proved that early diagnosis, proper treatment and return to work practices significantly improved the health status and wellbeing of 3,300 MSD patients. The trial lowered sickness absence by 39 per cent and reduced job loss by 50%, recouping around €11 of costs with every Euro invested in the programme. The results retrieved from the Spanish trial add up to further findings presented by the Russian Higher School of Economics at the Health Technology Assessment Conference in Kazan, in September 2013, which revealed that the investment of one rouble into the early intervention of Rheumatoid Arthritis and Ankylosing Spondylitis would bring 7 roubles in return. Latvia, also, made early intervention a national priority. The government adopted this year the “National MSD Programme” which is going to be implemented in 2014-2020.

To show the advantages of early intervention, Professor Stephen Bevan, from the Fit for Work Europe Coalition and The Work Foundation, applied the principles of the Spanish trial to 12 European countries, where comparable data exist. “If these results were repeated across the whole of the EU, we estimate that up to one million workers would be available to work each day. This would be a considerable boost to productivity and significantly reduce sick pay bills at a time when member states are under pressure to make savings and increase economic growth and to tackle unemployment and under-employment. Even if the reduction in absence achieved were 25% rather than 39%, we estimate that in excess of 640,000 workers would be available for work each day.”, said Prof Bevan.

Why is early intervention for MSDs a good idea for Ukraine?

Ukraine has much to share with Europe, especially in the area of non-communicable diseases like MSDs. Data released by the Minister of Health suggest that up to 4 000,000 Ukrainians suffer from MSDs and incur the risk of cardio-vascular diseases that can lead to premature death. To complicate things still further, half of these patients are from the working age group (35 to 60 years old).

The Ministry of Health in Ukraine already developed a comprehensive programme to manage MSDs with a focus on Rheumatoid Arthritis (RA) called “Care programme for patients with Rheumatoid Arthritis for 2011-2015”. This programme is also one of the key performance indicators of the Draft Law of Ukraine “On Approval of the National Programme <<Health - 2020: Ukrainian Dimension>>”. However, the programme has been waiting for approval for several years now .

Rheumatoid Arthritis is an inflammatory form of MSDs widely spread in Ukraine. The condition manifests itself once the immune system attacks the tissues lining the joints, inflaming and causing pain, heat and swelling. According to the programme proposed by the Ministry of Health and based on about 1% prevalence, there are 118,000 patients with rheumatoid arthritis (RA) in Ukraine. About 54,000 patients are workers under medical supervision. Furthermore, the State Report on Health Statistics in Ukraine reported in 2009 an incidence rate of 15.2 per 100,000 workers, that is 4,226 new cases every year. 7.

Around 20-30% of patients with RA become completely unable to work during the first 2-3 years of illness, about 50% in 10 years and an alarming 90% within 20 years. RA also contributes to the high mortality rate in the Ukraine.  Mortality rates in patients with RA are at least two times higher than the general population and it is getting worse every year.

Early intervention is crucial to RA patients, who can suffer irreversible joint damage the longer the disease is left untreated. Correct treatment is the major reason that many RA patients nowadays are not commonly seen in wheelchairs, or suffering multiple joint damage to their hands, or other major joints. On top of that, as elsewhere in Europe, most costs associated with RA are due to temporary and permanent work disabilities. Hence, early assessment and diagnosis, as well as prevention strategies, such as exercise, physiotherapy, life course planning, medicines and faster and earlier return to work, are critical to movement, being pain free and supporting a longer, more active and healthy lifestyle.

The Ukrainian social community seems willing to take an active part in finding efficient solutions to MSD related issues. Academics, health experts, economists and charities are rallying against MSDs under the Fit for Work umbrella. Their mission is to convince the government to facilitate cross-ministerial collaboration and sharing of budgets, data and outcomes between the ministries of health, labour and welfare in order to secure early intervention programmes for working age patients with MSDs. Fit for Work has already started doing research on the prevalence and incidence of MSDs in the working age population in Ukraine and a report is due to be released in early spring 2014 alongside recommendations for the government, policy-makers, clinicians, employers and patients.

Greater participation in the labour market is key to driving economic prosperity in Ukraine and elsewhere in Europe. 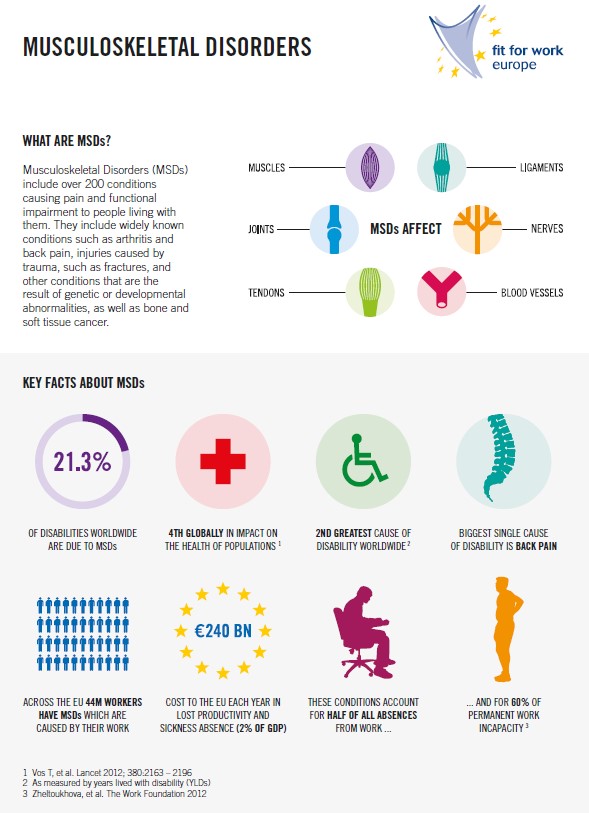 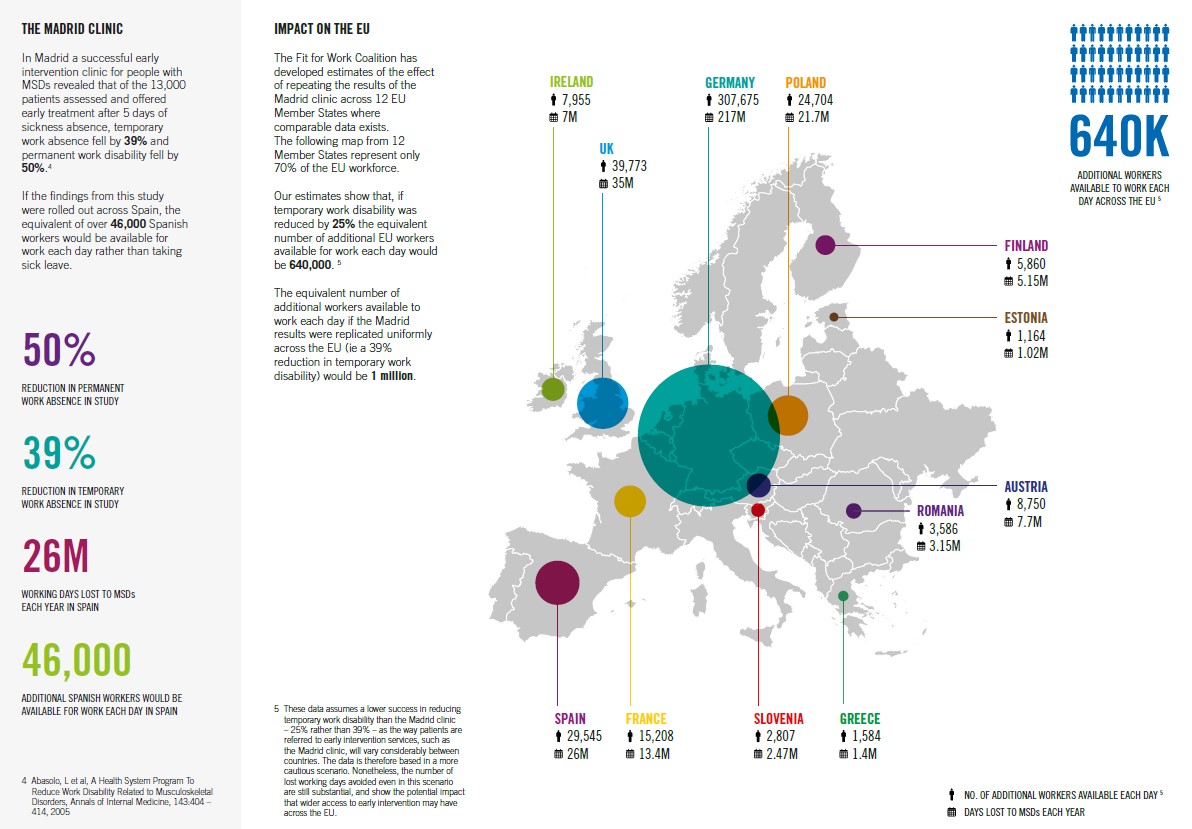 LINK to the article in PDF: Ukraine - article for country profile - Signed Off - untracked [PDF] 607 Kb

7 Conception of the treatment program for patients with rheumatoid arthritis for 2011-2015 http://rheumatology.org.ua/blog/news/1119/