ATHENS, Greece - Coca-Cola Hellenic announced the inauguration of advanced energy-efficient power generating capacity at its plant in Ukraine that will reduce CO2 emissions by more than 40% and will increase energy efficiency by more than 32% versus traditional power generation.

The Combined Heat and Power (CHP) plant, which is located at the Coca-Cola Hellenic bottling facility in Kyiv region, was introduced in partnership with ContourGlobal, an international provider of efficient energy solutions. ContourGlobal has invested in the project approximately €18 million.

The President of Ukraine, Victor Yanukovych, who officially inaugurated the new energy saving facility stressed the importance of this initiative for the environment, and the community and called on Ukrainian business to switch to eco-friendly technologies. “…we urgently need to implement modern technologies to decrease CO2 emissions and utilise energy resources more efficiently,” he said.

With electrical capacity of 6MW, the CHP plant supplies highly efficient clean electricity, heat, chilled water and CO2 for the soft drink production process. It is the only “quad generation” plant in Ukraine.

Natural gas is the primary source of fuel for the twin Jenbacher engines which generate electricity. As they turn, they create heat which is captured to produce hot water for production use. This then passes through absorption chillers to provide chilled water. The use of combined electricity, heat and cooling generation guarantees high efficiency in environmental, technical and financial terms.

PARTNERSHIP WITH CONTOURGLOBAL SOLUTIONS
Commenting on the CHP inauguration George Nizharadze, Senior Vice President of ContourGlobal Solutions said: “This is the eighth project of its kind which we have built, commissioned and are going to operate in partnership with Coca-Cola Hellenic.

"This represents our commitment and capability in the development and operation of innovative cogeneration for industrial partners interested in long term, efficient, reliable and environmentally friendly

Working in partnership, Coca-Cola Hellenic and ContourGlobal have pledged to build a total of 20 CHP facilities in different countries by 2015. This marks the biggest CHP programme in the beverages industry and is expected to reduce global carbon emissions by 250,000 tonnes each year on completion.

ABOUT COCA-COLA HELLENIC
Coca-Cola Hellenic is the second-largest bottler of products of The Coca-Cola Company in terms of volume with sales of more than 2 billion unit cases. It has broad geographic footprint with operations in 28 countries serving a population of more than 570 million people.

Coca-Cola Hellenic offers a perse range of ready-to-drink non-alcoholic beverages in the sparkling, juice, water, sport, energy, tea and coffee categories. Coca-Cola Hellenic is committed to promoting sustainable development in order to create value for its business and for society.

This includes providing products that meet the beverage needs of consumers, fostering an open and inclusive work environment, conducting our business in ways that protect and preserve the environment and contribute to the socio-economic development of our local communities.

ContourGlobal develops and operates electric and combined heat and power businesses around the world in partnership with governments and multinational companies. The Company focuses on high-growth, under-served markets and innovative niches within developed markets such as renewable energy and Combined Heat and Power (CHP).

The Company consists of eleven businesses in operation and construction on four continents with approximately 3,000 MW of generating capacity and an active pipeline of new development business totaling 10,000 MW. 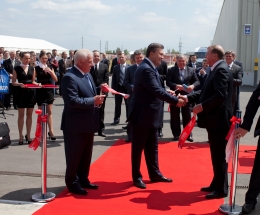 "This is a wonderful example of modern production technology. We are launching today another project of the company, which will help reduce greenhouse gas emissions by 128 thousand tons over the next four years," he said, congratulating the audience on the event.

After the ceremony, the President toured the plant and talked to its staff. "I congratulate you on this occasion. This is a great event. I wish you enjoyment of your work," he said. Viktor Yanukovych also saw the production process at the enterprise.