“NIBULON IS A SYMBOL OF UKRAINE’S REVIVAL” - PETRO POROSHENKO

MYKOLAYIV — Oneof the leaders of the Ukrainian agrarian market – the agricultural companyNIBULON is a symbol of Ukraine's revival and creation of a new state. Presidentof Ukraine Petro Poroshenko has announced about it during his visit to theshipbuilding and repair yard "NIBULON" in Mykolayiv city.

Within his visit Petro Poroshenko participated in a solemn ceremony ofkeel-laying of three new tugs of 121 project, launching of NIBULON-6 tug andputting into operation of NIBULON-5 tug with symbolic breaking bottles ofchampagne over the hulls of the vessels.

Being Presidential Candidate, Petro Poroshenko visited the shipbuilding andrepair yard "NIBULON" and became familiar with the tugs' construction."Recently, three months ago, we met at this very place. And I promised you thatone of my first visits (as a president) would be to your company. Now NIBULONis a symbol of Ukraine, a symbol of revival of Ukraine, Ukrainian agriculture,labour people, Ukrainian engineering, shipbuilding", noted President ofUkraine. 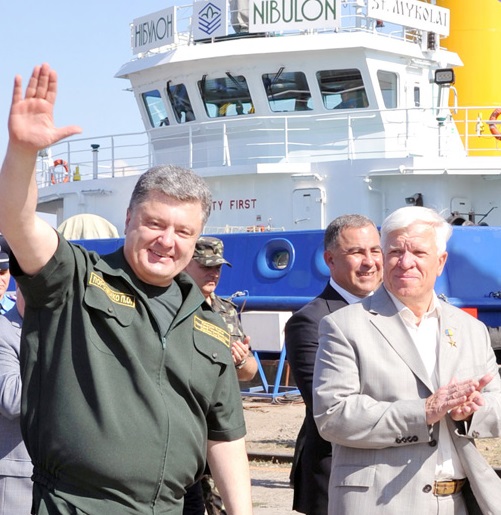 He also added that he, as an experienced shipbuilder, understood thosedifficulties shipbuilding companies of the country faced. But he also notedthat NIBULON coped with these difficulties with dignity. "Recollect ruins thatwere here several years ago! And what has happened when a labour man got downto business. At present we have the revived production. Ukraine will also berevived", said Petro Poroshenko.

It should be noted that today NIBULON is the only agrarian company thatdeals with the reviving of shipbuilding and navigation in Ukraine. At presentthe company's own cargo and maneuverable fleet consists of 37 vessels, and lastyear the shipbuilding and repair yard "NIBULON", being revived from ruins,joined NIBULON's structure.

According to Petro Poroshenko, powerful industrial companies and revival ofproduction facilities are a serious help to strengthen Ukraine's positions inthe international arena; first of all, when negotiating peaceful settlement ofa war conflict. "In order to have strong positions during negotiations onpeace, we must have strong Ukraine, strong production, and strong army. In sucha way we will be able to protect Ukraine's sovereignty, independence,territorial integrity", thinks Petro Poroshenko.

On his side, he promised to support business that creates workplaces andrevives production potential of the country, including at the internationallevel. "Ukrainian authority will promote products of Ukrainian producersworldwide. And everyone who will stretch out his hand for corruption bribe,this hand will be cut off. This won't happen again. There will be protectionagainst taxmen, law enforcement officers, and others", promised PetroPoroshenko.

According to him, new vessel launching is a symbol of a new country. "It isa very important event in life of the shipyard and crew of the vessel. This isa holiday and I am glad that we find the strength to do our business, toproduce competitive products, to create workplaces, to pay taxes, to strengthenUkraine in such difficult conditions", summarized President.

In his turn, NIBULON's General Director, Hero of Ukraine Oleksiy Vadaturskyythanked President for participation in this solemn event. "Today we have threebig events: putting into operation of the tug No.5, launching of the tug No.6and construction beginning of new tugs of a completely new project.

This makes it possible for our company to additionally transport more than600 thousand tons by water transport this year alone. Highways and railwayswill be relieved. There will be the economy for Ukraine's agrarian sector;there will be ecology. There will be workplaces; we have created more than 300workplaces during reconstruction of our shipbuilding and repair yard", informedO. Vadaturskyy.

According to him, the shipbuilding revival at NIBULON will enable to buildmore vessels to improve agrarian sector logistics and to strengthenshipbuilding potential of Ukrainian rivers in whole.

Launching of NIBULON-5 and NIBULON-6 tugs of POSS-115 project "was held onDecember 5, 2013, on the company's birthday, having marked the beginning of theprogram to build vessels at its own shipbuilding and repair yard "NIBULON". Thetugs' construction was the first shipyard's orders. 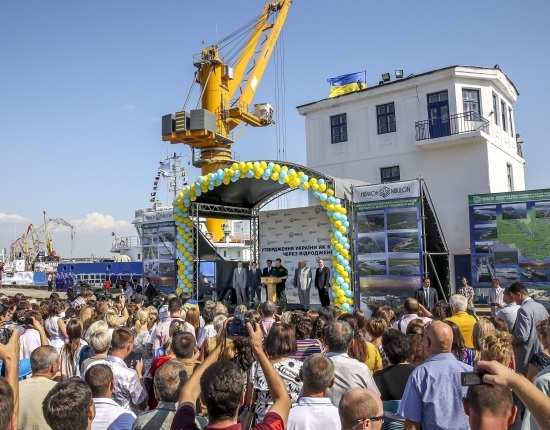 It is symbolic thatNIBULON's shipbuilding program has started at the beginning of the Revolutionof Dignity, when Ukraine "awoke as a new country which was ready to strugglefor its future and to be acknowledged in the international society", they sayin the company.

NIBULON's example and its persistence in struggling for Ukraine's future andindestructibility in reviving Ukrainian navigation will inspire our Motherlandprotectors in the east of Ukraine.

Construction of NIBULON's own fleet at the shipbuilding and repair yard"NIBULON" is a part of the project implementation to revive river navigation.

Due to the successful implementation of the investment program in 2014navigation season, the company has already transported and shipped for exportmore that 1.3 million tons of grain cargoes, thus, reducing the volumes ofinner cargo motor transportation and rail transportation (taking intoconsideration railcars deficiency) by Ukraine's roads.

On completion of the implementation of this program, the volume of cargotransportation along Ukraine's waterways will comprise up to 3 million tons ofgrain crops annually, thus, allowing to daily (!) relieve more than 250 railcars and to remove more than 600 heavy-load trucks from our roads.

Putting into operation of NIBULON-5and NIBULON-6 tugs of POSS-115 projectwill enable to additionally transport more than 600 thousand tons ofagricultural commodities along the Dnipro River per marketing year, to relievemore than 8.3 thousand railcars and to remove more than 12.5 thousandheavy-load trucks from domestic roads.

And putting into operation of three tugs of 121 project will allow totransport 200 thousand tons of products along the Southern Bug River permarketing year, thus, allowing to remove 5 thousand heavy-load trucks fromMykolayiv city and roads of Mykolayiv region per day. Besides, this will allowto improve environmental conditions of Mykolayiv city.

NIBULON's investment program implementation leads to Ukraine's agrariansector improvement annually. On its completion, Ukrainian agriculturalproducers will be able to obtain additional income at the level of USD 0.5billion annually. "Domestic agrarians will have an opportunity to becomeentities of the international market, supplying agricultural commodities toNIBULON directly without agents and additional transport expenses", they say atNIBULON. NIBULON also plans to revive navigation and passenger traffic alongthe Southern Bug and the Dnipro Rivers. Construction of NIBULON own cargo fleetwill contribute to it.

Despite difficulties our country faces, NIBULON is persistently moving toachieve its high goal: strengthening of Ukraine as a marine country by revivingshipbuilding.

NOTE:  Photos from the official web-site of President of Ukraine areused in the article www.president.gov.ua