"MOVING UKRAINE FORWARD THROUGH THIS DIFFICULT TIME" USUBC webinar with Volodymyr Yelchenko, Ambassador of Ukraine to the United States 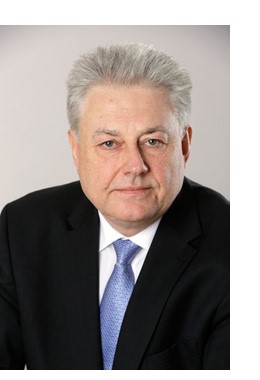 The Ambassador will be talking about the government of Ukraine's rapid response to COVID-19, the government of Ukraine's program to get businesses in  Ukraine open again, U.S.-Ukraine relations with the U.S. Congress and with the Administration in 2020 and any additional support for Ukraine being discussed with the U.S. government, international organizations and about other issues.  The program will also include 3 persons who will bring their observations and respond to the Ambassador's comments.

Volodymyr Yelchenko presented his credentials from Ukrainian President Volodymyr Zelenskyy to US President Donald Trump on January 6, 2020. Ambassador Yelchenko has outstanding professional profile, including several Ambassadorships (Austria and Russian Federation), he served as Permanent Representative of Ukraine to the United Nations and UN Security Council.

The U.S.-Ukraine Business Council, (USUBC), www.USUBC.org, had several very productive meetings with Ambassador Yelchenko in Washington in January and February shortly after he assumed his office. And USUBC members look forward to hearing again from the Ambassador about "Moving Ukraine Forward Through This Crisis," and especially the current state of the cooperation between the U.S. government and the government of Ukraine government during this difficult time.

You will not want to miss this unique opportunity to participate in the live online meeting with the Ambassador to the US Volodymyr Yelchenko.  The U.S.-Ukraine Business Council President & CEO Morgan Williams will moderate the webinar.

The link to join the online meeting will be sent to you in the confirmation e-mail after you register. If you are not able to use Zoom via download, additional options will be provided in the confirmation e-mail. The webinar meeting will also be broadcast on USUBC YouTube channel and on USUBC Facebook page.  If you have any questions about connecting to the USUBC webinar please contact Denys Jatsyshyn, USUBC Director, Corporate Relations in Kyiv at DJatsyshyn@usubc.org.

NOTE: Please submit your questions to USUBC President Morgan Williams to mwilliams@USUBC.org, at least one hour prior to the event

BIO: Volodymyr Yelchenko, Ambassador of Ukraine to the USA

Volodymyr Yelchenko has almost 40 years of outstanding diplomatic experience. He has worked in the diplomatic service of Ukraine since 1981. Between 1997 and 2000 he acted as Permanent Representative of Ukraine to the United Nations in New York. From December 2000 till his next post he served at various senior posts within the Foreign Ministry of Ukraine. In 2005 - 2006 he was Ukraine's Ambassador to Austria, in 2006 - 2010 Mr. Yelchenko served as Permanent Representative of Ukraine to the International Organizations in Vienna, Austria.

After 2010 Volodymyr Yelchenko served as Ambassador of Ukraine to the Russian Federation. On 17 March 2014, during the 2014 Crimean crisis, Yelchenko was recalled from Moscow for consultations in regards to situation with Crimea. Since then Ukraine’s highest diplomatic representation in Russia is its temporary chargé d'affaires. On December 9, 2015 Yelchenko was appointed Permanent Representative of Ukraine to the United Nations. In 2016 – 2017 Mr. Yelchenko served as Representative of Ukraine to the UN Security Council. He was born in Kyiv in 1959. Volodymyr graduated from the Faculty of International Relations and International Law at Kyiv State University in 1981.