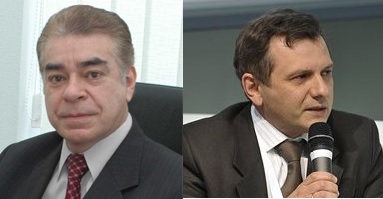 YOU ARE INVITED TO ATTEND a U.S.-Ukraine Business Council (USUBC) Roundtable "ACTION PLAN FOR ECONOMIC GROWTH AND RADICAL REFORM AGENDA" presentation by Dr. Edi Segura, Chairman of the Board, The Bleyzer Foundation, Partner and Chief Economist, SigmaBleyzer and by Oleg Ustenko, Executive Director, The Bleyzer Foundation, in Kyiv, Ukraine.  The session is On-The-Record.  Dr. Segura will also give an update on the current macroeconomic situation and what is expected the rest of 2016.

The timely and important USUBC  "Action Plan for Economic Growth and Radical Reform Agenda" Roundtable will be held on Wednesday, April 27, from 3:45 p.m. to 5:30 p.m. in the Conference Room at the offices of SigmaBleyzer/The Bleyzer Foundation, 4a, Baseyna Street; "Mandarin Plaza/Arena," 8th floor, Kyiv, Ukraine (see directions below) followed by a reception.  The presentations will be followed by an open discussion/Q&A session.

The current economic and political crisis is a major call for Ukraine to implement now a RADICAL and SUBSTANTIVE REFORM AGENDA and move the country away from the past Soviet structures, policies and institutions, revitalize economic growth and allow Ukraine to be a strong, properous, independent country. Only a substantive ECONOMIC REFORM PROGRAM would ensure rates of economic growth of at least 7% per annum over the next 5 years and longer. To achieve these growth rates will require a major increase in domestic and international investments, as well as improvements in productivity.  Fundamental improvements must be made in Ukraine's investment/business environment.

RSVP:  Registration is required for attendance at the USUBC members briefing in Kyiv.  Please register by sending an e-mail to mwilliams@usubc.org. There is no charge for the meeting or the reception.

Dr. Segura joined The World Bank in 1972 and served in senior positions dealing with 35 different countries until 1998. His many positions with The World Bank included Division Chief, Industrial Development and Finance Division, Europe, Middle East and North Africa Region; Director, Country Department II and Technical Director, Latin America and Caribbean Region; and Chief of World Bank Mission in Ukraine. During Dr. Segura’s tenure in Kiev, The World Bank approved total lending/guarantees of about $1.6 billion for ten operations. Before his assignment in Ukraine, Dr. Segura was responsible for all World Bank operations in Mexico, Central America, Venezuela, Haiti and the Dominican Republic. The Department's portfolio under his supervision included 90 operations, with a loan amount of $12 billion.

Dr. Segura holds a Ph.D. degree (in Finance and Economic Development) and an MA degree (Economics) from Columbia University in New York, an MBA degree from Stanford University in California, an MA degree from ESAN (Escuela Superior de Administracion de Negocios) in Peru, and an Industrial Engineering degree from Peru. He is a graduate of the Advanced Management Program at Harvard University and the Corporate Strategy Program of MIT. He was also a Visiting Scholar at the Kiel Institute for World Economics in Kiel, Germany.

(2) OLEG USTENKO - Oleg Ustenko is an Executive Director at The Bleyzer Foundation. His economic and financial research is focused on transitional and developing economies. The CIS region and Ukraine are his particular areas of interest.

Mr. Ustenko joined The Bleyzer Foundation in 2004 and since then has been actively involved in all major projects, including assessments in macroeconomics, investment and the overall business climate in the regions of analysis.  He also acts as a consultant to the Ukrainian government and other CIS countries. He is an active participant at major economic and business conferences in the region and is one of the most published and quoted economists in Ukraine.