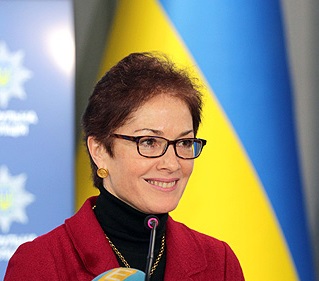 YOU ARE INVITED TO ATTEND a USUBC members meeting with the Ambassador of the United States of America to Ukraine Marie Yovanovitch. The USUBC (www.USUBC.org) meeting with Ambassador Yovanovitch will be held on Thursday, April 20, from 4:10 p.m. to 5:30 p.m., in the Conference Room at the offices of SigmaBleyzer, 6 Baseyna Street, Mandarin Plaza, 8th Floor, Kyiv, Ukraine, followed by a reception. (see directions below).

USUBC members had an excellent business luncheon with Ambassador Yovanovitch in Washington, D.C. in March 2017. You will not want to miss this opportunity.

RSVP:  Registration is required for attendance at the USUBC meeting in Kyiv with the U.S. Ambassador. Please send an e-mail to USUBC President Morgan Williams, mwilliams@usubc.org. The meeting will be in English.Please RSVP NOW

BIO -- Marie Yovanovitch, Ambassador of the United States of America to Ukraine.

Marie L. Yovanovitch, of Connecticut, a Career Member of the Senior Foreign Service, Class of Minister-Counselor, was confirmed by the United States Senate on July 14, 2016, to be Ambassador Extraordinary and Plenipotentiary of the United States of America to Ukraine.

A Career Member of the Senior Foreign Service, Ambassador Yovanovitch has been granted both the Senior Foreign Service Performance Award and the State Department’s Superior Honor Award on five occasions. She is also the recipient of the Presidential Distinguished Service Award and the Diplomacy in Human Rights Award.  Ms. Yovanovitch is a graduate of Princeton University where she earned a BA in History and Russian Studies. She studied at the Pushkin Institute and received an MS from the National Defense University.

NEWS: For the latest news about Ukraine go to the KYIV POST website:www.KyivPost.com.