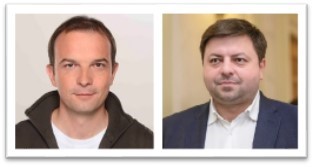 They will also present the idea of the New Economic Doctrine for Ukraine and elaborate on the current and long-term priorities of the country as well as the challenges it faces at the regional level and in the society.

RSVP:  Registration is required for attendance at the USUBC Roundtable with MPs Iegor Soboliev and Ivan Miroshnichenko. Please send an e-mail to Morgan Williams, mwilliams@usubc.org.

BIOS –
Iegor Soboliev, Samopomich Party, Former Chair of the Committee on Preventing and Fighting Corruption of the Parliament of Ukraine

Iegor is a Ukrainian Politician, rormer journalist and anticorruption activists. Initiator and co-author of the Law «On the Government Cleansing» (lustration). Co-author of the key anti-corruption laws concerning support of the National Anti-Corruption Bureau and the National Agency for Prevention of Corruption, on strengthening the role of civil society in fighting corruption offenses (the so-called law of private prosecution), on enhancing transparency in property relations to prevent corruption.

In July 2013 Sobolev announced the start of his political career. In June 2013 he became one of the founders of political party Volia, which took an active part in the student Euromaidan movement. Soboliev was the Maidan day commandant. He became a member of the Maidan Council, which coordinated activists and opposition parties.
Iegor was elected to Verkhovna Rada in 2014.

Ivan Miroshnichenko is a Ukrainian politician, Member of Parliament of Ukraine of the 8th convocation, member of the parliamentary faction Samopomich Union.

Ivan became a Member of Ukrainian Parliament in 2014. Mr. Miroshnichenko is a member of Committee on Agrarian Policy and Land Relations, Verkhovna Rada [Parliament] of Ukraine

Prior to his election to Rada, from 2008 to 2013 Ivan was a Black Sea Regional Director at NOBLE RESOURCES UKRAINE (a member of the Noble Group), Kyiv, Ukraine.  Before that time he worked for almost 10 years as Head of the of Purchase and Foreign Trade department and Vice President and at CARGILL, Kyiv, Ukraine. Mr. Miroshnichenko is a well-known expert in agrarian field in Ukraine.