"HOLODOMOR: THROUGH THE EYES OF UKRAINIAN
ARTISTS" EXHIBITION HELD AT UKRAINE HOUSE" 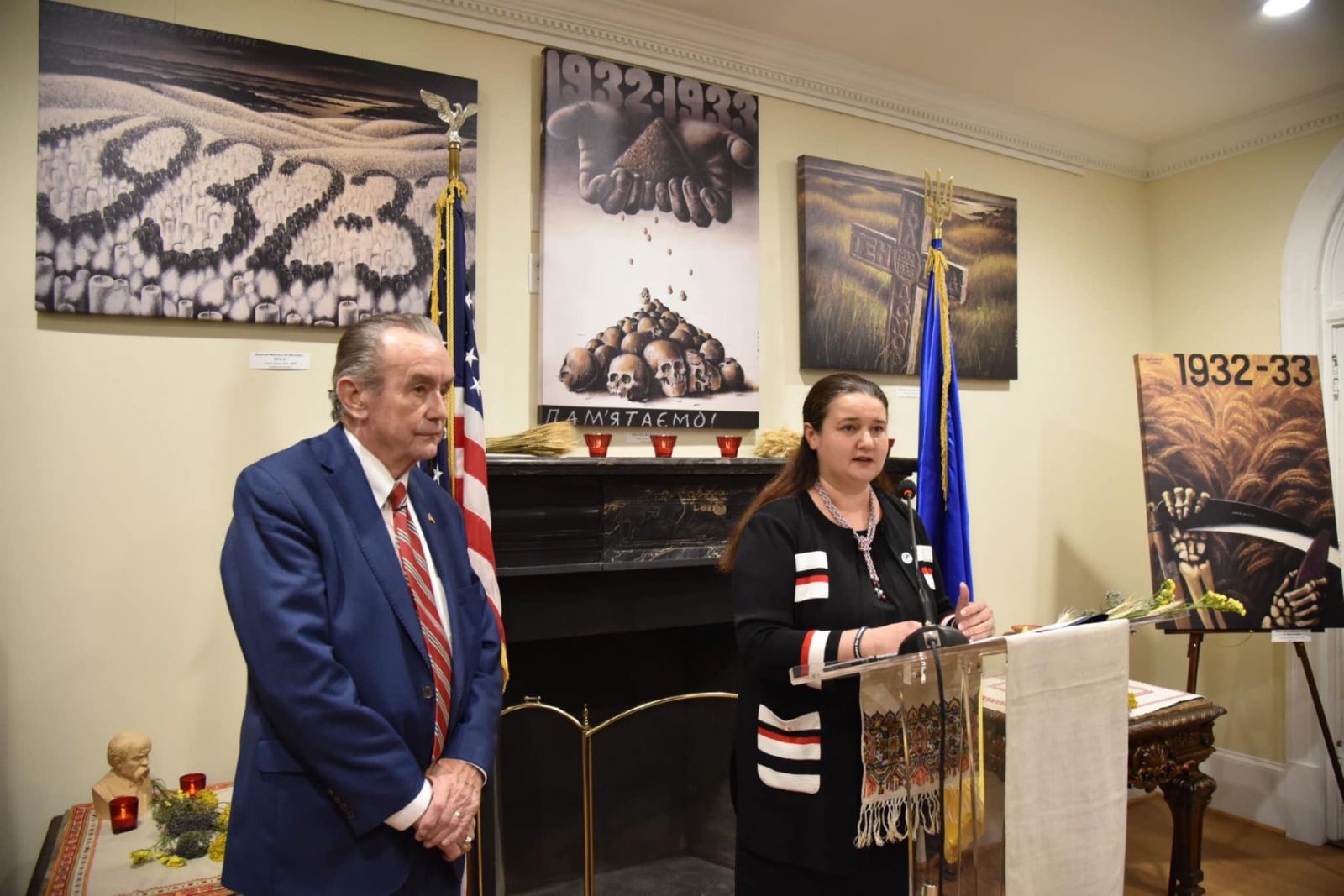 Washington, D.C. -- On November 16th the Ukraine House in Washington welcomed visitors with hundreds of lighted red candles. It became a tradition in Ukraine to commemorate victims of Holodomor genocide of 1932-1933 by lighting a candle in the window. 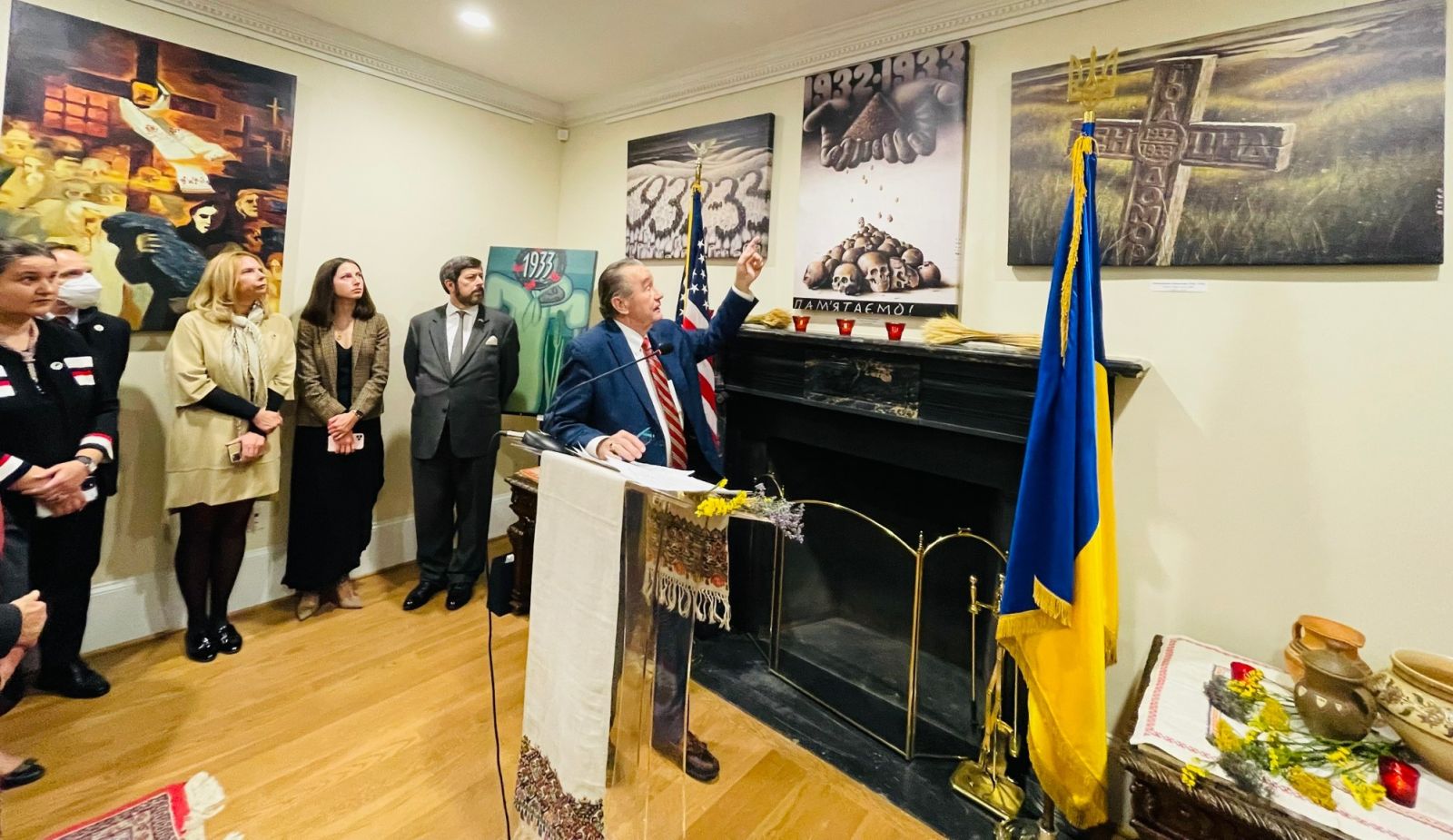 In the picture left to right: Morgan Williams, trustee of the collection tells about pictures on display and poster writer Valerii Viter.
This year, a unique art exhibition "Holodomor Through the Eyes of Ukrainian Artists" was presented for the first time in the United States to tell the story of starvation and the massive destruction of rural Ukraine using the language of artistic talent.

The exhibition that features over 75 paintings, graphics, linocuts, posters and other artwork was sponsored by the U.S.-Ukraine Business Council (USUBC), www.USUBC.org, and organized in cooperation with the Ukraine House and with the Embassy of Ukraine. The Ukrainian community also participated in providing the Exhibition with antique embroidery items, pottery, dresses, and artifacts of village household life in the 1930's. 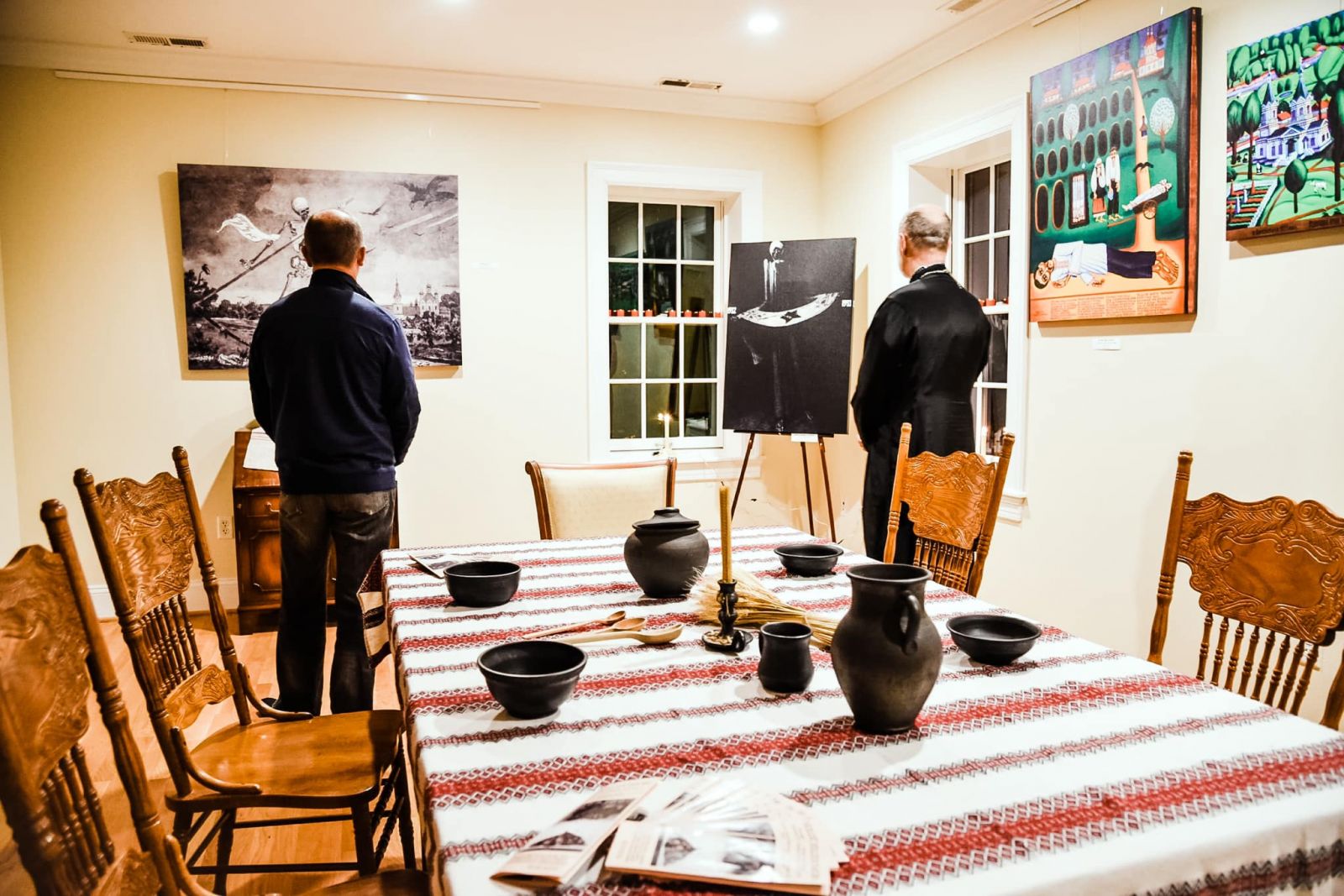 Fabricated by the Stalin regime the famine in 1932-1933 took the lives of millions of Ukrainians. While Ukraine was known as a "bread-basket of Europe" due to major grain harvests and food exports to Western-European states, people in villages had their crops and other foods confiscated from them and thus starved to death. 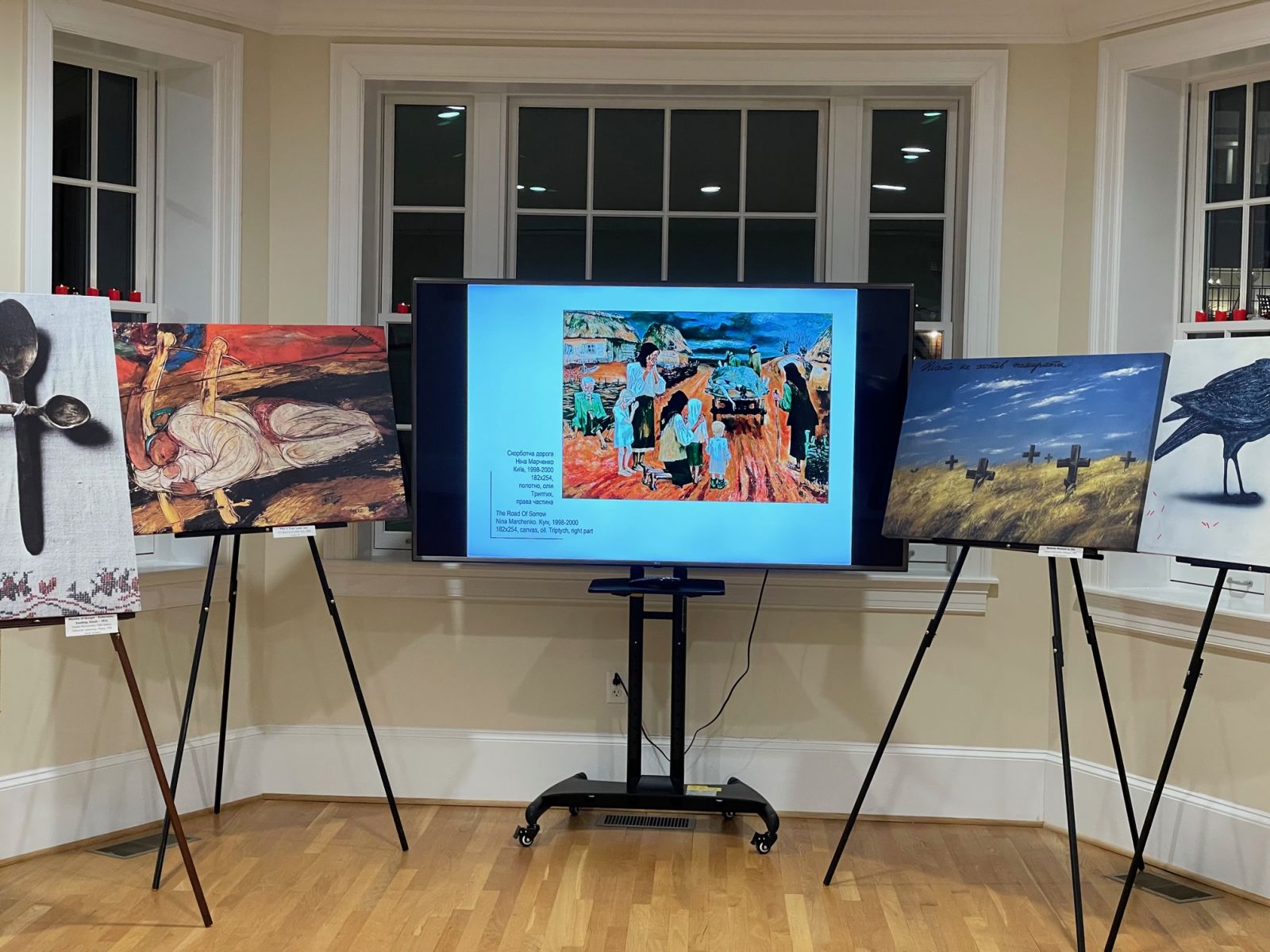 In his opening remarks, the founder/trustee of the collection Morgan Williams, who serves as President of  U.S.-Ukraine Business Council said:  What happened during the Holodomor was the subject of a major cover-up, black-out by the Soviet Union. The lack of photographs and other visual evidence of the Holodomor makes the graphic artworks even more important by showing the world about the famine/genocide in Ukraine.

"A large portion of the collection was found in Ukraine during 1997-2000, stored in the back of artists’ studios because nobody was interesting in buying  Holodomor artwork. We are fortuate that around 250 original artworks were found by artists that wanted to use their artistic talents to tell the story of the Holodomor. Most of the artists had family members who died during the famine or wanted to show their hatred of the Soviet Union's treatment of Ukraine," Williams said. 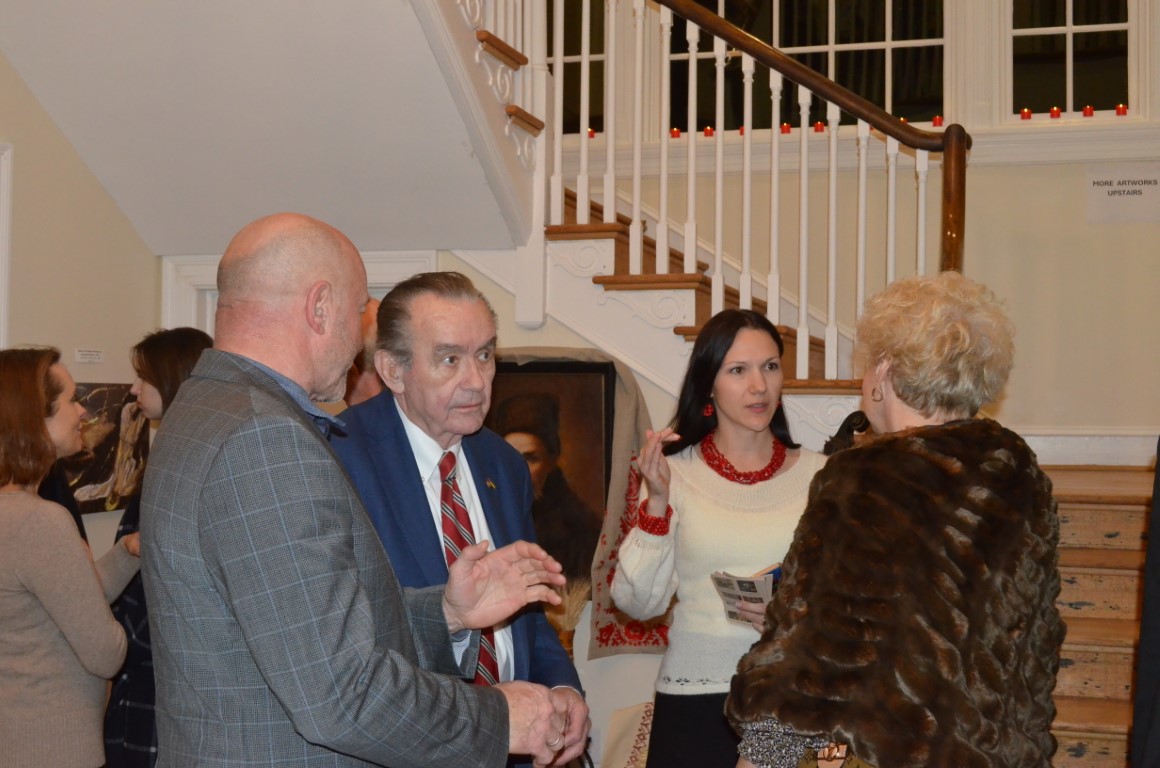 Ambassador of Ukraine to the USA Oksana Markarova, Metropolitan Archbishop Borys Gudziak, and Michael Sawkiw, Chairman of U.S. Committee for Ukrainian Holodomor Genocide Awareness, shared their reflections and thoughts about the tragedy and horror of Holodomor.
​In the picture: Guests discuss artworks during the opening reception

“November is a sad month for all of Ukrainians because it’s dedicated to the most painful page of our history, - Ambassador Markarova said. "The Holodomor was imposed on people of Ukraine not just to take our bread away, but to snuff out any resistance and make us forget about our civilizational choices – to be peaceful bread growers who want to govern their own lives."

She also added that “Today Ukraine is fighting for civilizational choices again. But we are doing it much better in terms of telling the truth, holding the enemy accountable, in terms of getting support from the West. It’s time to call the crime by its name”.

Archbishop Borys Gudziak noticed that besides the tragedy of genocide there is also a celebration of life. Holodomor gathers thousands of Ukrainians around the world not only to commemorate the victims of Holodomor, but also to unite the nation. 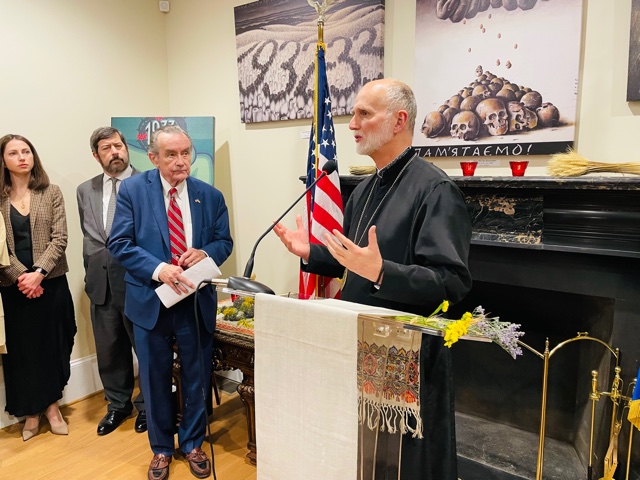 The Holodomor Through the Eyes of Ukrainian Artists" exhibition will be open at the Ukraine House until December 1st from 9 a.m. to 1 p.m. and from 2 p.m. to 7 p.m (closed for lunch from 1 p.m. to 2 p.m.), except it will be closed for weekends and holidays. 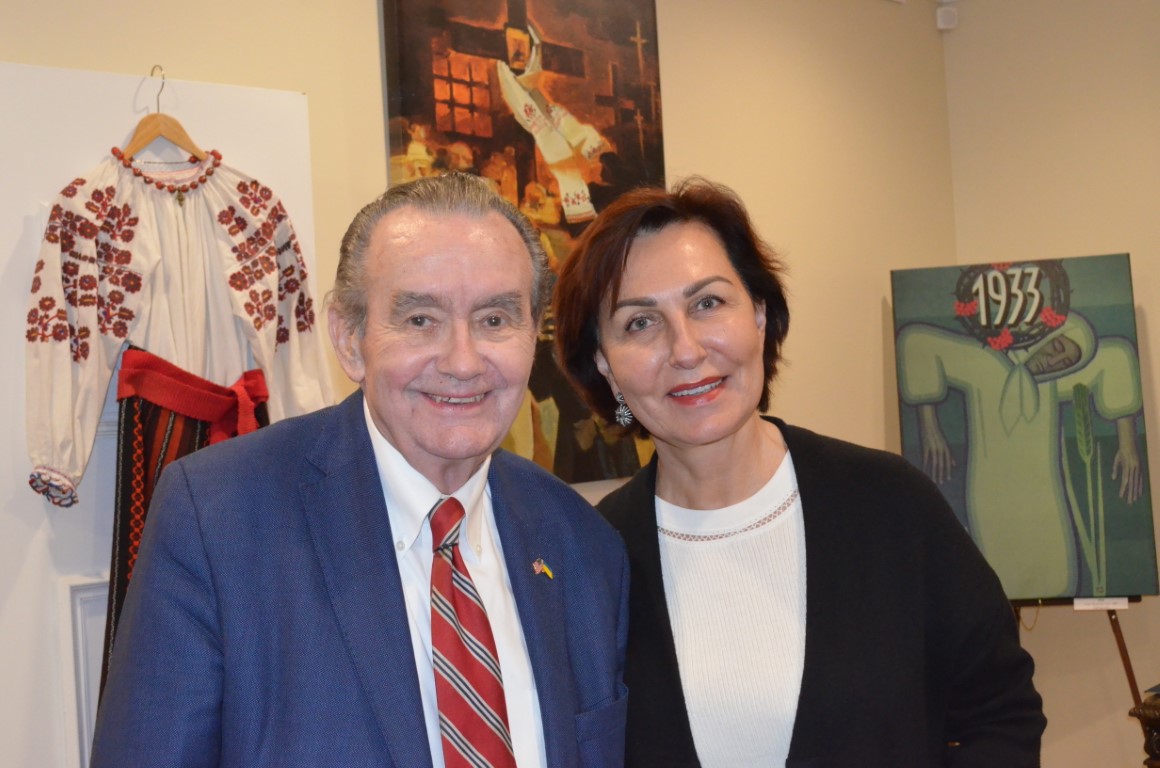 To view more photographs of the Holodomor Exhibition, please click on this LINK.