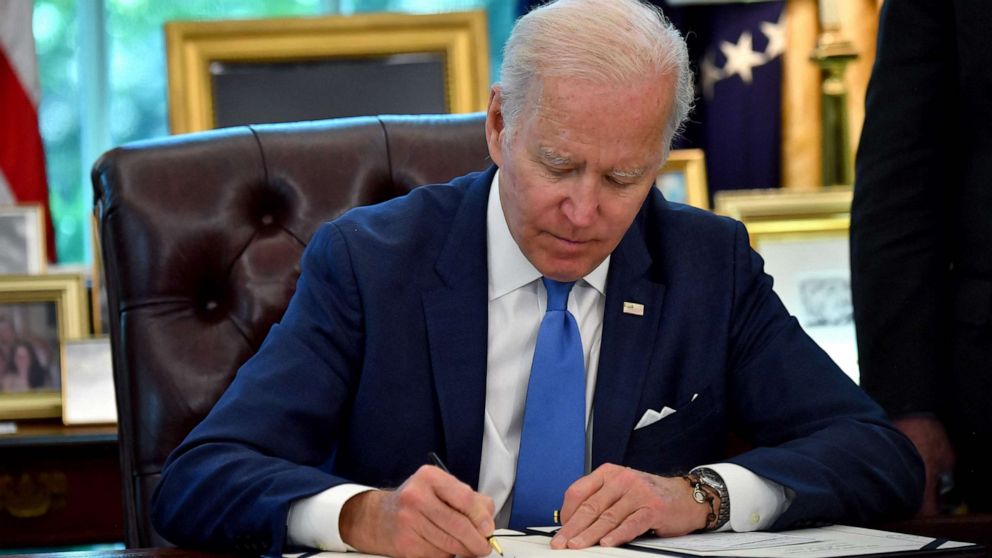 President Biden signed into law on Monday afternoon a bill that will expedite the process of sending military aid to Ukraine, as the Eastern European country presses into its third month of fighting off a Russian invasion.

Flanked by Vice President Harris and members of Congress from both sides of the aisle, Biden vowed the United States will continue to support Ukraine “in their fight to defend their country and their democracy” against Russian President Vladimir Putin’s war.

“Every day Ukrainians fight for their lives,” Biden said. “The cost of the fight is not cheap, but caving to aggression is even more costly.”

The House passed the lend-lease bill last month on a 417-to-10 vote. Only a few weeks before, the Senate had passed it unanimously, a rare and overwhelming show of bipartisanship in today’s bitterly divided Congress.

The measure, introduced by a bipartisan group of senators, updates a 1941 law the United States used to help its allies during World War II. Now that the bill is signed into law, the United States will be able to more quickly provide equipment and other supplies to Ukraine during the ongoing Russian invasion, as the bill enhances Biden’s authority to expedite agreements with Ukraine and other Eastern European countries.

After the House passed the bill on April 28, House Speaker Nancy Pelosi (D-Calif.) harked back to the lend-lease program that President Franklin D. Roosevelt started with allied countries in 1941, which she said turned the tide of World War II.

“In his 1941 State of the Union address, President Roosevelt explained that democracy itself, democracy itself was under … dire threat, not only in Europe, but around the world,” Pelosi said then. “And he called on Congress to lend a hand to our allies overseas: bolstering their defenses so they can defeat the evils of fascism.”

Putin’s invasion of Ukraine was an echo of that chapter in history, Pelosi added in her remarks last month.

“The Ukraine Democracy Defense Lend-Lease Act of 2022 revives this pivotal program, waiving time-consuming requirements on the president’s authority to send critical defensive resources to Ukraine,” she said. “It’s important to note that it’s about time. Time is very important when lives are at stake.”

The weekend after the House passed the measure, Pelosi made a surprise visit to Kyiv, leading a small Democratic delegation to reaffirm U.S. support for Ukraine. There, they met with President Volodymyr Zelensky, who thanked the United States for “helping to protect the sovereignty and territorial integrity” of his country.

Over Mother’s Day weekend, first lady Jill Biden also made an unannounced visit to Ukraine, meeting with Ukrainian first lady Olena Zelenska in Uzhhorod, a city that lies on the border with Slovakia.

Biden on Monday noted that he was signing the lend-lease bill into law the day after V-E Day, which marked the end of World War II in Europe, and on the anniversary of the effort at European integration that produced the European Union.

“It’s something that is good for everyone,” Biden said Monday.