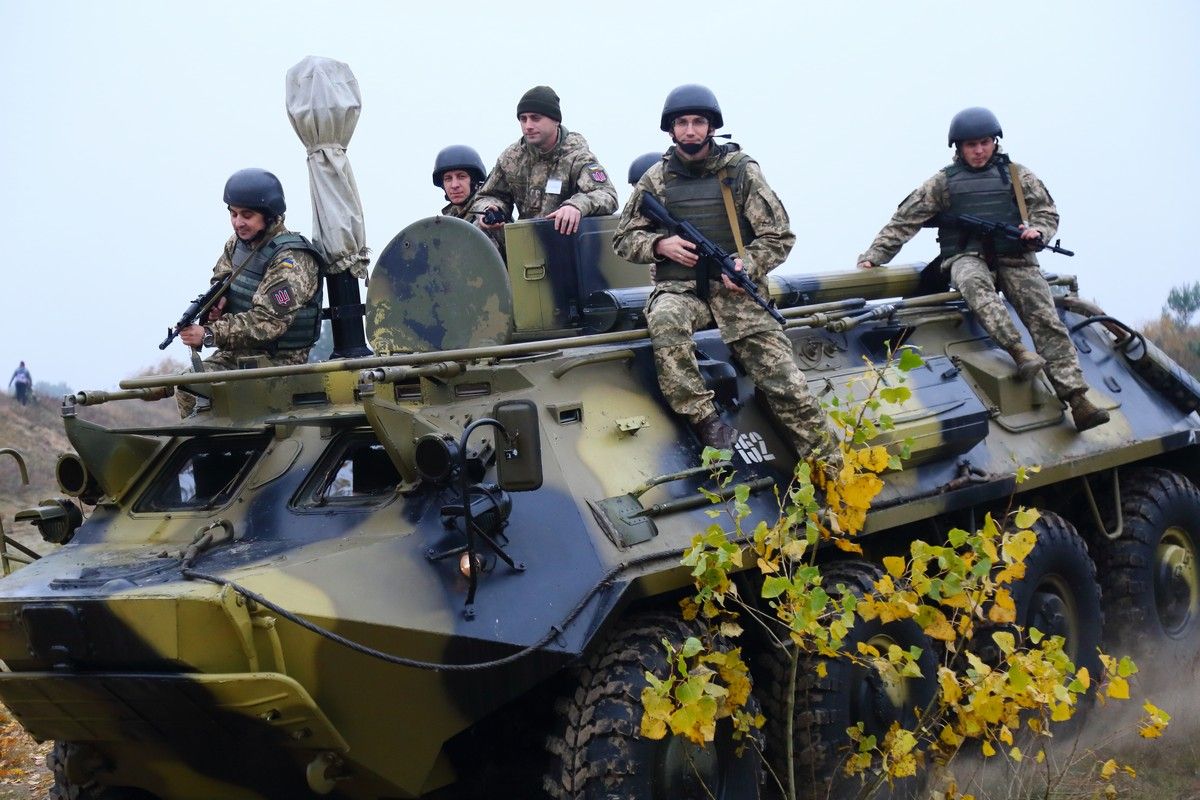 Ukrainian victory is in America's national interest. Calls for negotiations now are damaging and counterproductive.

Ukrainian victory – defined as expelling all Russian invading and occupying troops from Ukrainian territory—is not some pipe dream in Kyiv or among some of us in the commentariat.

The Ukrainians have demonstrated that if the United States and our allies continue to provide the kind of military and economic support Ukraine needs, they will know how to deploy such weapons effectively against the Russians. Yet there is a rising chorus of voices clamoring for a negotiated end to Russia’s war against Ukraine, creating music to ears in the Kremlin while demoralizing the brave Ukrainians doing the fighting.

Such calls are even coming from some within the Biden Administration. But those pushing for Ukraine to sit down and hammer out a negotiated resolution to the war don’t seem to be consulting the Ukrainians. Instead, they’re apparently driven by concern about escalation—that Russia might use a nuclear weapon to stop the advancing Ukrainian forces—and about the economic and financial fallout in parts of Europe and the United States. They seem to want to pressure Ukrainian President Volodymyr Zelenskyy to negotiate, a position that would be deeply unpopular inside Ukraine.

To the surprise of most analysts, Ukraine has scored tremendous victories in the war, albeit at a high cost, pushing back not only on Russian advances since February 24, but even recapturing territory Russia occupied for nearly eight years. As the Institute for the Study of War has written, “Russian forces have greatly depleted their arsenal of high-precision weapons systems and have suffered significant aviation losses and will likely struggle to maintain the current pace of the Russian military’s coordinated campaign against Ukrainian critical infrastructure.”

Analysts instead should be contemplating the possibility of a total Russian military collapse, and with it, quite possibly, the demise of the Putin regime. Should that happen, the likelihood of Ukraine’s regaining control of all its territory, including Crimea, becomes more real.

Following the recent liberation of Kherson and the slow but continuing progress in Luhansk, Ukraine has momentum on its side and has performed exponentially better in this war than most analysts anticipated. It has retaken most of the Kharkiv area as well, and Russia does not maintain total control in any of the regions it illegally annexed at the end of September.

The push for negotiations almost seems aimed at blunting Ukraine’s momentum, perhaps out of fear of what a defeated Russia might do. We already know what the current Russian regime is doing: committing war crimes and genocide. A recommendation that Ukrainian leaders talk with those committing such abuses is hard to swallow for most Ukrainians.

Those in the West who disparagingly argue that we are willing to fight to the last Ukrainian echo Putin’s rhetoric and deeply insult Ukrainians, who have been heroically defending their nation, whether we support them or not.

Western military assistance has had a great deal to do with Ukraine’s progress, though that takes nothing away from the heroism of Ukraine’s fighting forces and civilians, who have endured true hell from Russia’s genocidal campaign. That Western assistance, which some advocated against before February 24, must continue in order to give Ukraine the help it needs to regain control over all of its territory and achieve victory, not simply defend itself against Russian forces.

‌‌If we have learned nothing else from the course of the fighting since Putin unleashed the dogs of war, it is that Ukraine has showed unparalleled ability to fight intelligently against its foe despite the need to make do with a patchwork of weapons systems donated by Western nations. This has required rapid adaptation and innovation on the fly that is well worth not only the respect of the U.S. military and its NATO allies, but no small amount of detailed study as well.

Since February 24, when Putin ordered the reinvasion of Ukraine—after invading for the first time in 2014—the campaign has been costly for Ukrainians. Thousands of innocent Ukrainians have been killed, millions have been displaced, and the Ukrainian economy has been devastated. But for Russia, the war has been an unmitigated disaster.

Ukrainians fighters have not only pushed back on Russian efforts to capture Kyiv, the capital, and drive out the Zelenskyy government, but have dealt huge blows to the Russian side. Ukraine estimates that close to 75,000 Russian soldiers have been killed in the fighting; Western estimates are that some 90,000 Russians have been killed or wounded.

Despite a brutal Russian bombing campaign on Ukraine’s energy grid and water supplies, most Ukrainians remain confident in their ability to prevail in this war. The more atrocities and war crimes Russian forces commit, the less interest there is on the Ukrainian side to negotiate. Nor do the Ukrainians trust the Russians to abide by any agreement that might be reached—and Russian failure to comply with the 1994 Budapest Memorandum, the 1997 Russia-Ukraine Friendship Treaty, and the 2014 and 2015 Minsk agreements provides good reason for such skepticism.

Zelenskyy has made clear his intent to regain control not just over the eastern and southern parts of Ukraine, currently occupied by Russia, but over the Crimean Peninsula as well, which Moscow illegally annexed in 2014. If Zelenskyy were to give in to a Western push for negotiations that entails territorial compromise by Ukraine—which the vast majority of Ukrainians oppose—and consign the people living in those areas to remaining under the brutal control of Russia, this would undermine his position.

Many of those advocating negotiations or “preparing negotiations” (which amounts to the same thing) have raised concerns about an “escalatory spiral” that might lead ultimately to use of nuclear weapons (or chemical or biological weapons).  This concern seems misplaced and overblown.

Escalation is generally defined as a deliberate increase in the scope or intensity of violence in a conflict. The missile assaults that began this conflict remain little changed today, notwithstanding an uptick in October that has since subsided. The roughly one thousand mile front has, if anything, shrunk, as the fighting is more concentrated after Russian forces had to retreat from many areas.

And the level of violence on the front lines is arguably down because U.S. assistance to Ukraine in the form of the HIMARS (High Mobility Artillery Rocket System) has allowed the Ukrainian armed forces to target Russian logistics and artillery systems and suppress Russian fires, notwithstanding the recent missile attacks. Moreover, it appears that the Russian Black Sea fleet has ceased bombarding southern Ukraine with missile strikes.  More anti-aircraft and missile defense systems would strengthen Ukraine against the latest kinds of attacks from Russia.

The off-and-on talk coming out of Moscow about using nuclear weapons is largely just that—talk. It is consistent with long-standing Russian ideas of “reflexive control” and is meant to deter the West from providing further assistance to Ukraine.

Evidence from the past several weeks supports the idea that, far from the situation being in an uncontrolled “escalatory spiral,” Russia is making careful calculations about how far it can go with its public warnings. The climbdown from threats to withdraw from the Black Sea grain traffic agreement and statements by Putin and the Ministry of Foreign Affairs that Russia has no plan to use nuclear weapons on Ukraine and sees no utility in doing so undercut the idea of an out-of-control process of action-reaction escalation.

Evidence from the past weeks supports the idea that, far from the situation being in an uncontrolled “escalatory spiral,” Russia is making careful calculations how far it can go with its public warnings.

The new push for negotiations, however, plays right into the Kremlin’s hands.

The tactics of Russian fighters have been brutal from the beginning—as the atrocities uncovered in Bucha and Mariupol, among other sites, attest. The advocates for negotiation admit there is little prospect for successful talks at present. Also ill-timed is the reported Biden Administration’s desire to persuade Ukraine’s leaders that expressing “openness” to negotiations will help maintain Western unity.

While coalition maintenance and alliance management are laudable goals, if they are achieved at the expense of Ukrainian morale and will to persevere in the face of Russia’s full-on assault on Ukrainian critical civilian infrastructure, this will likely only demoralize the Ukrainian public and undermine the will of those on the front lines who are sacrificing life and limb to maintain Ukraine’s military momentum.

Russian forces have been poorly led and short of weapons and supplies, to the point where Moscow has had to turn to Iran and possibly North Korea for provision of weapons, including Iranian kamikaze drones.

The Wagner mercenaries, who have been playing an increasingly large role in the war, have gone into Russian prisons to recruit new cannon fodder to sacrifice on the front. The forces that Wagner’s founder, Evgeniy Prigozhin, has recruited from jails and mental hospitals have suffered mind-blowing casualties in a misguided effort to take Bakhmut, and the forces of Chechnya’s gangland leader Ramzan Kadyrov have proven ill-equipped and unprepared for the fighting and have suffered considerable losses as well.

In a sign that even Putin knew things were going badly, he ordered a mobilization of several hundred thousand Russians in September, a move he had been resisting for months. Sending more Russian bodies to the front lines to be killed won’t solve the Russian supply and logistical problems and may, in fact, exacerbate them.

It will also aggravate the already deep morale problems on the Russian side. Reports of new forces being sent to the front lines untrained and poorly supplied are making the rounds in Russia. Many Russian forces have been wondering from day one why they were attacking Ukraine, and many also expressed dissatisfaction with their military leaders.

By ordering the mobilization, Putin personalized the war for all Russian families, hence the exodus of so many Russians immediately after the order was issued. This “brain drain,” which includes many young men working in information technology, is one of the reasons that some observers have suggested Putin is turning Russia into a larger, ten-time-zone version of North Korea.

Before the order was given, the Russian side was being manned mostly by those in the poorer regions of the country. Now it affects everyone. Winter will affect both sides but will likely be more harmful to the ill-equipped Russian forces, if their current poor provisioning continues.

So a Ukrainian victory is possible if we continue to support Ukraine with the weapons it needs and the financial assistance to cover its hemorrhaging budget. Ukrainian victory is in our national interests, to ensure that Putin and his forces never again invade Ukraine or any other neighbor for that matter. Negotiations may, at some point, be necessary, but calls for them now are incredibly counterproductive and damaging to Ukraine.

Once the dust from the U.S. midterms settles, President Biden needs to make the case to the American people and the incoming Congress that supporting Ukraine is the right thing to do. Congressional leaders from both sides of the aisle should join him in doing so to offset harm done by reckless comments by some in both parties in the leadup to November 8.

This is a time for Americans to come together and join Ukraine in recognizing the danger Putin poses and the need, thanks to the courage of Ukrainians, to defeat that threat once and for all.

Eric S. Edelman is Counselor at the Center for Strategic and Budgetary Assessments and was Undersecretary of Defense for Policy (2005–09).

David J. Kramer is Executive Director of the George W. Bush Institute and a former Assistant Secretary of State for Democracy, Human Rights & Labor in the George W. Bush Administration. David Kramer has served for many years as a Senior Advisor of the U.S.-Ukraine Business Council and participated in many USUBC programs.