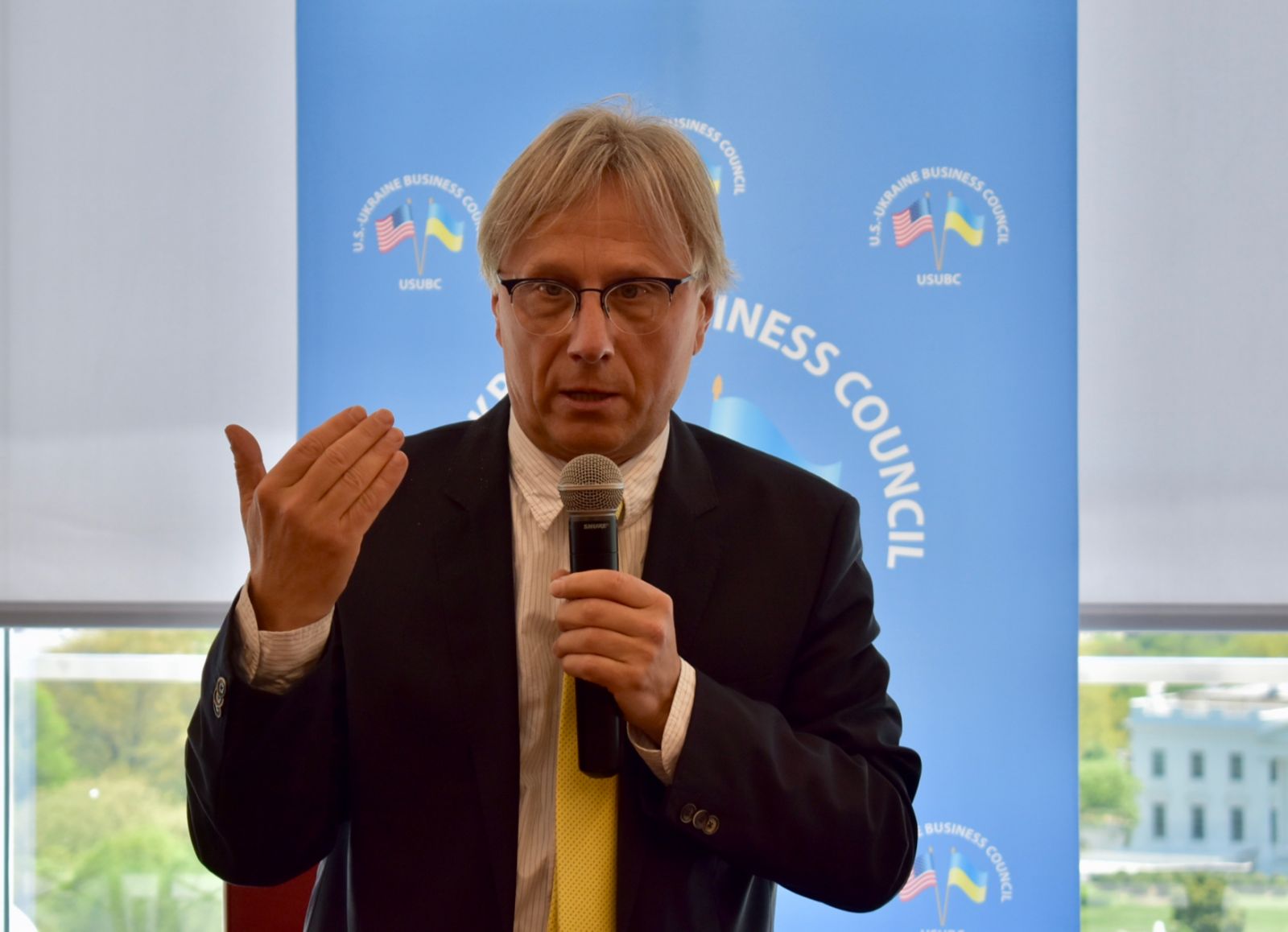 On May 1 US-Ukraine Business Council (USUBC) held an excellent working luncheon meeting with Volodymyr Lavrenchuk, Chairman of the Board of Reiffesein Bank Aval who presented to USUBC members his vision of the future of the banking sector in Ukraine. 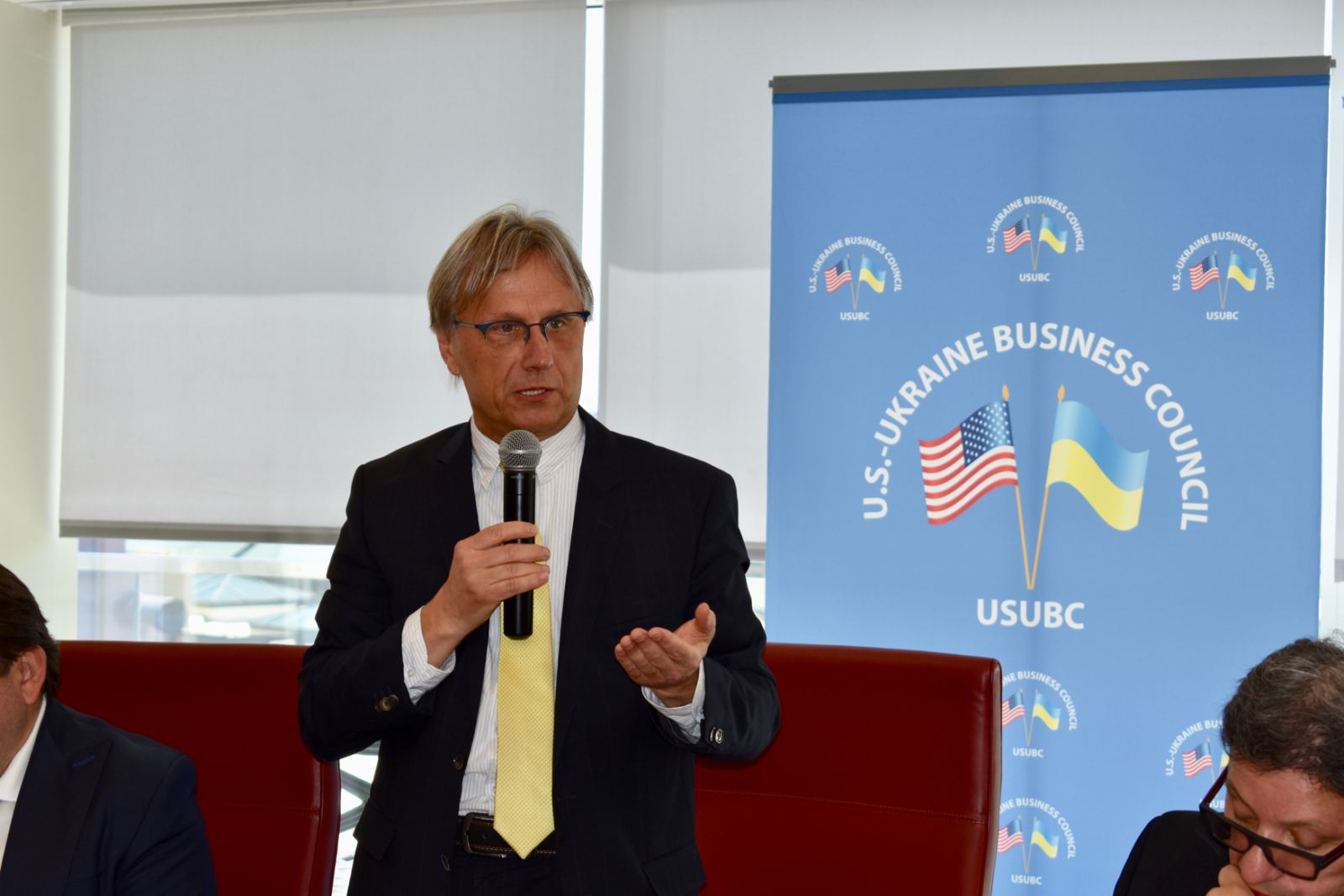 He commented on Reiffesen's successful strategy in Ukraine, its business approaches and on the changes and trends that were affecting the banking industry today. 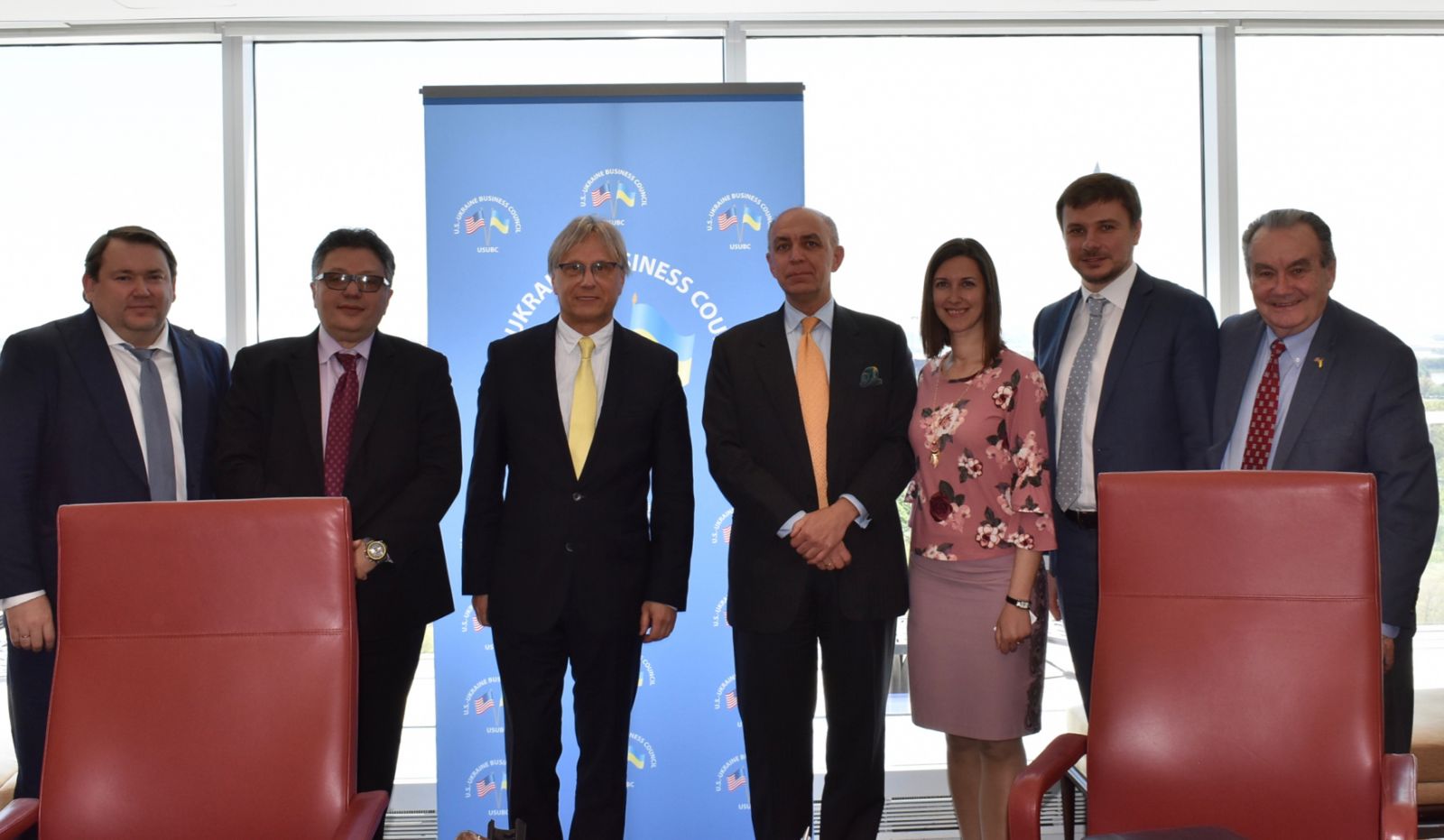 Volodymyr Lavrenchuk is recognized as one of the most trusted experts in the financial and banking sectors of Ukraine, one of the best top managers in Ukraine’s banking system and a most authoritative banker of Ukraine. He is a highly respected business leader. 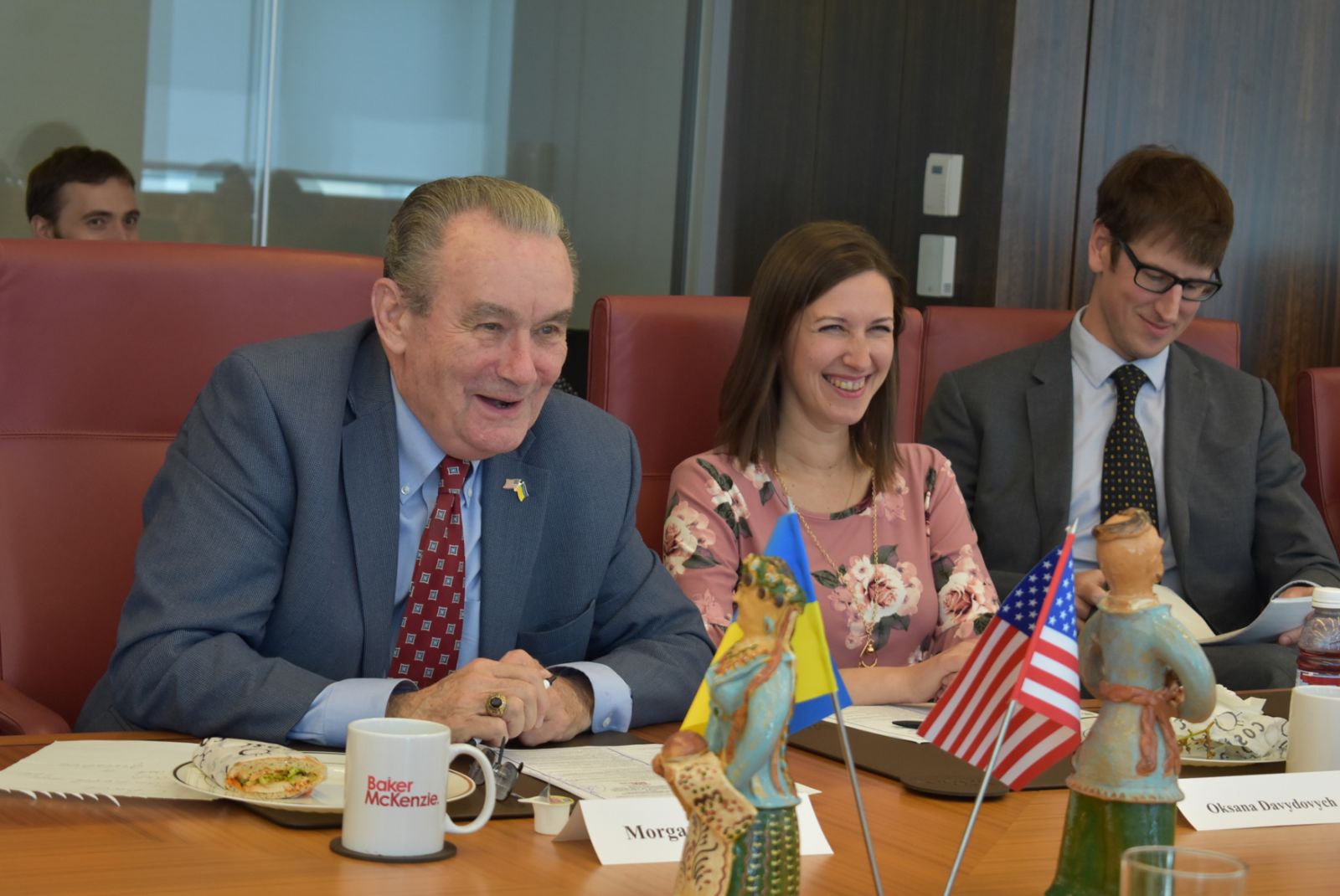 In the picture: Morgan Williams, President of USUBC; Oksana Davydovych, Economic Specialist, U.S Embassy, Kyiv; Eddie Eichler, Ukraine Desk Officer (Econ), U.S. Department of State
​
This roundtable was moderated by USUBC President Morgan Williams. After his presentation Mr. Lavrynchuk took numerous questions from the audience regarding business and investment climate in Ukraine, new banking regulation and the NBU's policies in the banking sector of the Ukraine. 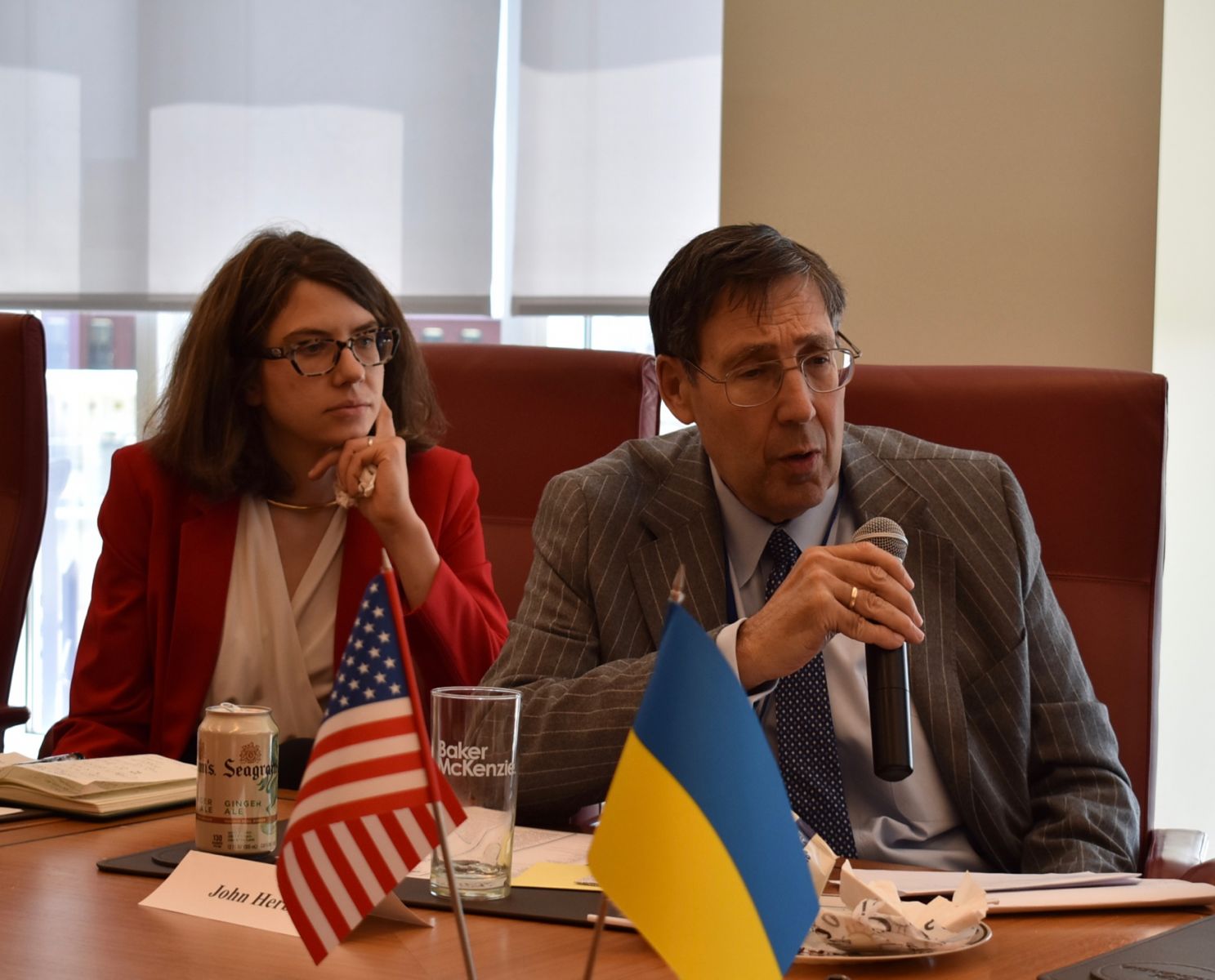 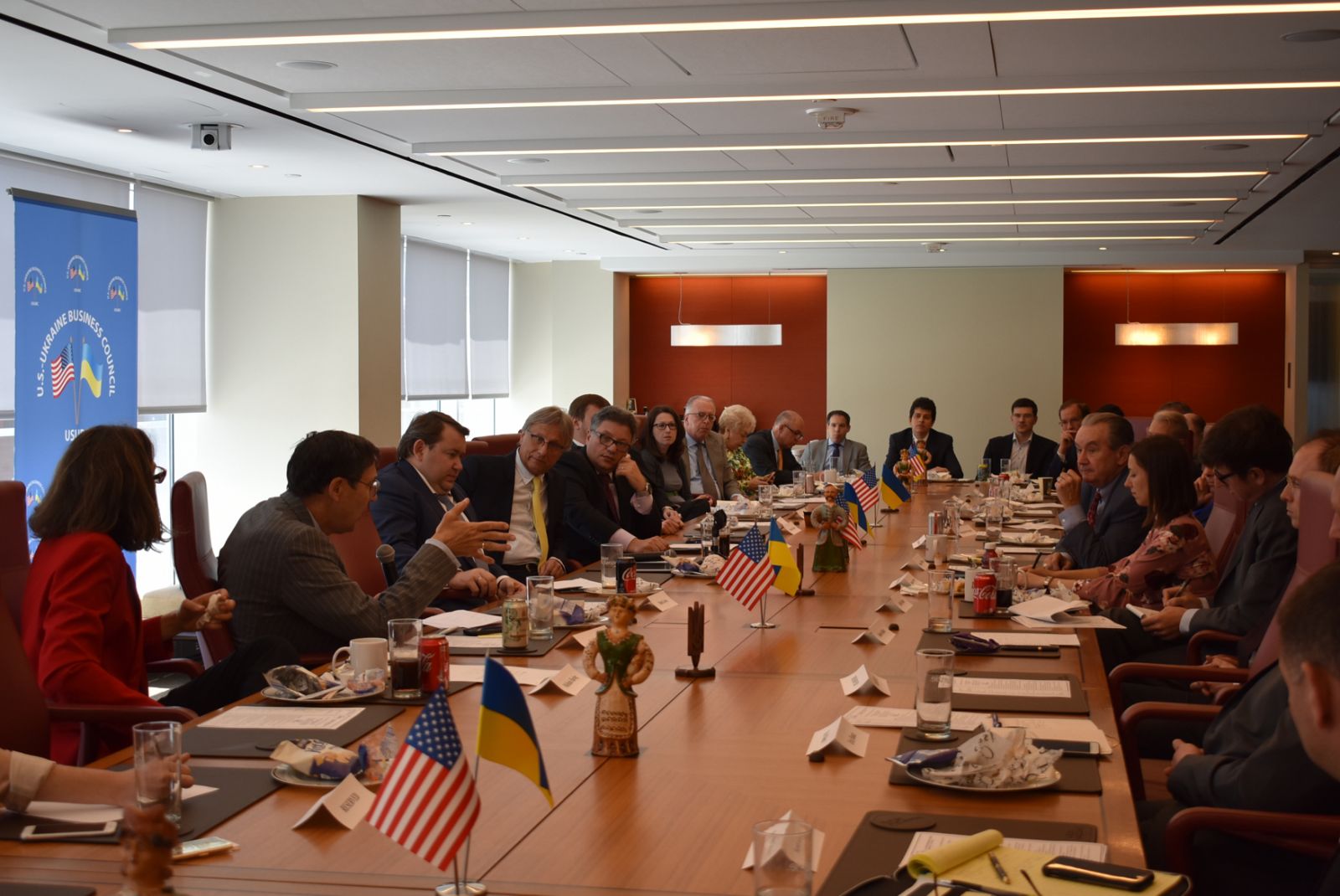 The U.S.-Ukraine Business Council (USUBC) would like to thank again Volodymyr Lavrenchuk for taking time to meet with our members and discussing critical and important issues.

Our special thanks to BakerMcKenzie, a member of USUBC for letting us use their great White House room for the meeting in Washington!

BIO: Volodymyr Lavrenchuk, Chairman of the Board, Raiffeisen Bank Aval

Volodymyr Lavrenchuk has not once been recognized as the best leader in the financial segment of Ukraine. In 2011, he was named among TOP 5 most authoritative top managers in all the industries of the Ukrainian economy according to the rating made by the Companion magazine. Expert groups, which took part in making business ratings in different years, recognized CEO of Raiffeisen Bank Aval as the best top manager in Ukraine’s banking system (the magazine “TOP 100. Rating of Business Leaders of Ukraine” and awards of the Guard of Managers all-Ukrainian Rating); the most authoritative manager among the leaders of Ukrainian banks (the Companion magazine); the best top manager in terms of introduction of reputation marketing (the Bankir magazine); the best top manager of a bank with foreign capital (the Kontrakty business weekly). In 2014, Volodymyr Lavrenchuk took the first position in the rating “Ukrainian bankers most open for communications with journalists and clients”, made by the Investgazeta.

In 2015, the Companion magazine recognized Volodymyr Lavrenchuk as the most authoritative banker of Ukraine. He also topped the Ukrainian Banker Awards rating of the best Ukrainian bankers, made by the business portal Delo.ua. Volodymyr Lavrenchuk is a Trust Council of the National University “Kyiv-Mohyla Academy”.  In 2016, Mr. Lavrenchuk became a laureate of the prize “People of the New Time” by the Novoye Vremia magazine and for the fourth time he took the 1st position in the category “Banker of the Year” in the Financial Oscar rating by the Biznes newspaper. He was also named among the winners in the category “Best Top Manager of a Bank” in the rating “50 Leading Banks in Ukraine 2016” of the Financial Club company.

ABOUT THE RAIFFEISEN BANK AVAL BANK

Raiffeisen Bank Aval provides a wide range of standard and innovative banking services to more than 2.5 million customers via its nationwide network, which comprised, as of the end of December 2017, 500 outlets located throughout Ukraine. Raiffeisen Bank Aval maintains its leadership in the service quality in the Ukrainian banking sector. According to GfK Ukraine, which is specialized in market researches, the reputation of the bank outreaches the average market one.

Substantial successes of the bank are traditionally recognized by reputable editions and experts, rating companies, partners and customers in Ukraine and abroad. Among those awards were “Best Bank in Ukraine” (by Euromoney, Global Finance, EMEA Finance), “Best Trade Finance Provider in Ukraine ” (Global Finance); “Most Active Issuing Bank in Ukraine under the Trade Facilitation Program” (EBRD) and many other.