How the Cold War created the world's largest airplane - AN-225 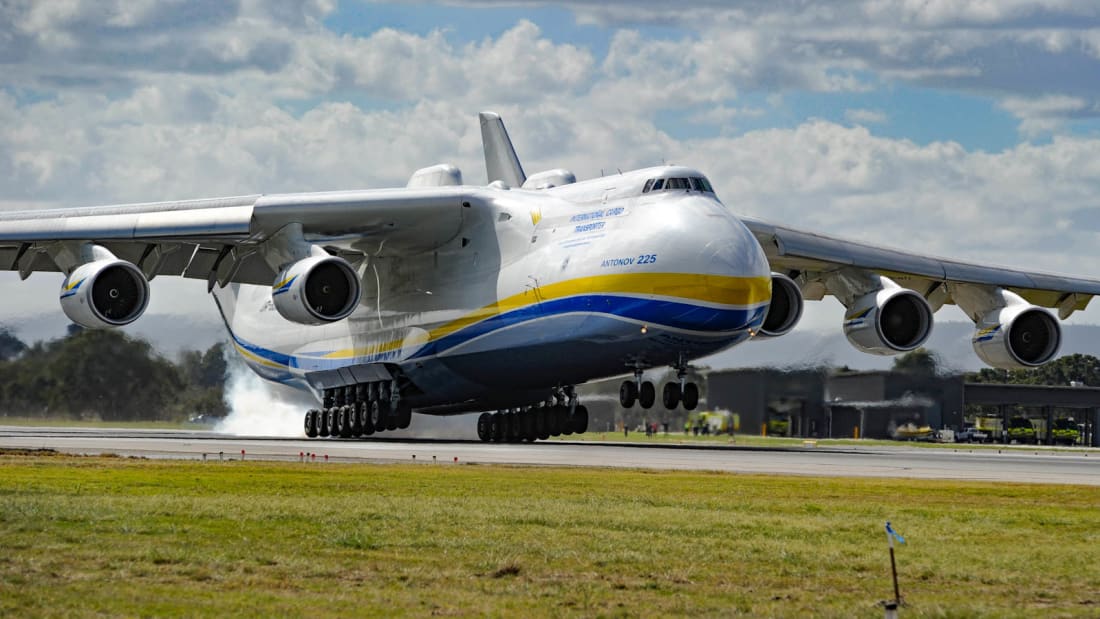 (CNN) — The first powered plane flight, performed by the Wright Brothers over the windswept beach of North Carolina's Kitty Hawk in 1903, covered 120 feet. That historic flight would fit entirely in the cargo hold of the Antonov AN-225 Mriya, the world's biggest fully operational plane [made by Antonov Design Bureau in Kyiv, Ukraine.]

Powered by six turbofan engines and with a wingspan almost the length of a football field, this gentle giant of the skies can carry bigger and heavier cargo than any other plane, and is unique in the world of aviation, as just one was ever built. A favorite of plane spotters around the world, the AN-225 attracts a crowd whenever it visits an airport during one of its rare -- and often spectacular -- heavy lift jobs. 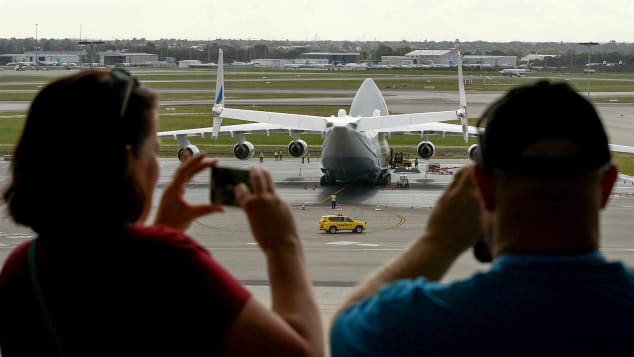 Onlookers video the AN-225 Mriya from the viewing deck at Perth International airport.

"It looks magnificent during takeoff and landing and it seems to slowly sail into the air, due to its huge size," said Ilya Grinberg, a Soviet aviation expert and a professor of engineering at Buffalo State University. "It can be easily photographed with any type of camera and it looks very impressive from any angle. I think it is indeed an engineering marvel," he said.

Recently, the plane has been used in the Covid-19 relief effort to transport record loads of protective equipment. But its original mission was very different: born out of the Cold War, the AN-225 was designed to be part of the Soviet space program. 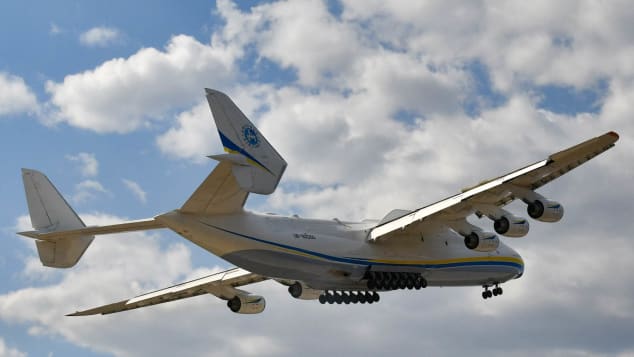 The AN-225 was conceived to carry Soviet space shuttles.

A new era in space exploration began in April 1981, when the first Space Shuttle launched into orbit from NASA's Kennedy Space Center in Florida. Its large cargo bay was a design feature pushed by the Pentagon, which used the Shuttle in a handful of classified missions to send military satellites into orbit. The USSR perceived this capability as a threat, and wanted a vehicle that could do the same.

The result was the Buran ("Blizzard" in Russian), a Soviet Shuttle that looked remarkably like its American counterpart, down to the black and white paint job.

But whether it was a straight up clone or simply informed by the laws of aerodynamics, the Buran -- along with its companion rocket, the Energiya -- came with a logistical problem: how to transport the spacecraft from manufacturing facilities around Moscow to the Baikonur Cosmodrome, 1,300 miles away in today's southern Kazakhstan, from which Soviet space missions departed. 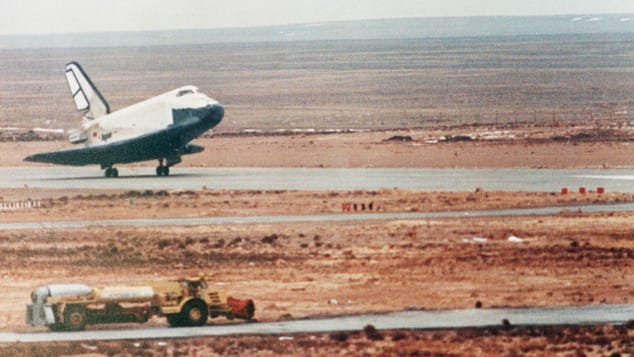 The Soviet Union's Buran shuttle looked similar to its US counterpart.

Rather than building a new freeway across rivers and mountains, Soviet engineers asked the Antonov Design Bureau in Kyiv, Ukraine, to create a new transporter plane capable of airlifting the shuttle and its rocket. It would also be used to haul the Buran back to Baikonur whenever it would land at a backup site rather than the Cosmodrome upon returning from orbit.

Antonov based it around an existing model, the AN-124 Ruslan, itself already a very large plane, bigger than the Boeing 747-400.

The overall size was increased significantly, with the goal of doubling the cargo capacity. Among the visible upgrades were an extra pair of engines, bringing the total to six, and a longer landing gear, which increased the wheel count to a whopping 32. A new twin tail with an oversize vertical stabilizer was also added to allow the plane to carry the Buran on its back.

The resulting behemoth, so large that it stuck out of its hangar during the inauguration ceremony, was christened the AN-225 Mriya.

"Mriya is the Ukrainian word for 'dream.' It was the first Soviet plane to be christened with a Ukrainian name," said Grinberg. 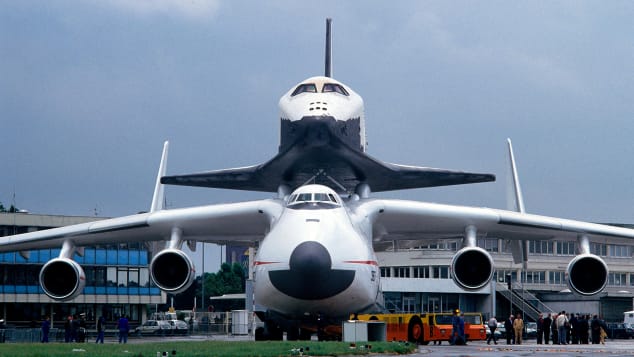 The AN-225 carrying the Buran space shuttle was the star of the 1989 Paris air show.

The Antonov Design Bureau worked quickly to produce the finished plane in just three and a half years, but it still couldn't keep up with the development of the Buran, so an interim solution was chosen: adapting a fleet of old 3M-T bombers to carry the spacecraft unassembled.

When the AN-225 was finally ready, it was history it couldn't catch up with: both the Buran and the AN-225 first flew in late 1988, a year before the fall of the Berlin Wall, which foreshadowed the collapse of the Soviet Union.

As a result, the Buran program was canceled after just one official mission, and the AN-225 ended up carrying the shuttle piggyback style in only about a dozen test flights.

The duo stole the show when it made an appearance at the 1989 Paris Air Show, but its primary mission had vanished. An outlandish proposal to transform it into a flying hotel, with suites and swimming pools and space for 1,500 guests never turned into reality, and the AN-225 ended up in a hangar where it was stripped for parts and rusted away for seven years. 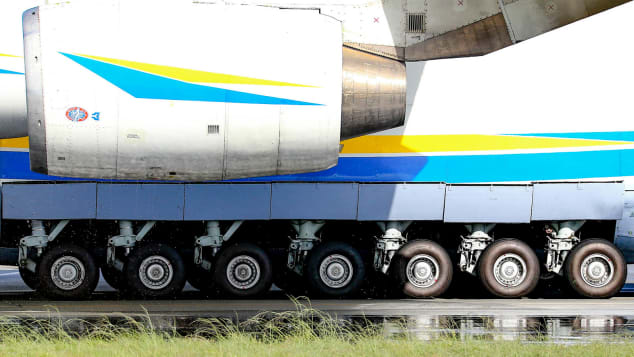 In 2001, the AN-225 was dusted off, thoroughly upgraded with modern equipment and brought back into service.

In the same year it set 124 world records, according to Antonov, including those for carrying capacity, flight altitude with cargo, and lifting record cargo to an altitude.

"This happened on the day of the tragedy of September 11, 2001, and therefore all these records went unnoticed," said Grinberg. "That day, five battle tanks, each weighing 50 tons, served as the control cargo. And they drove into the cargo cabin themselves."

The plane was resurrected because Antonov Airlines, a division of the Antonov company [Kyiv, Ukraine] that operates around a dozen heavy transporter planes, was receiving orders on cargo deliveries that were beyond the capabilities of the AN-124, known as the AN-225's "little brother."

"We quickly understood that there was a growing demand for oversize or extremely heavy pieces of cargo," said Vitaliy Shost, senior deputy director of Antonov Airlines. He says that the AN-225 is able to accommodate up to 950 cubic meters of cargo, compared to 750 for the AN-124 and 650 for a Boeing 747. 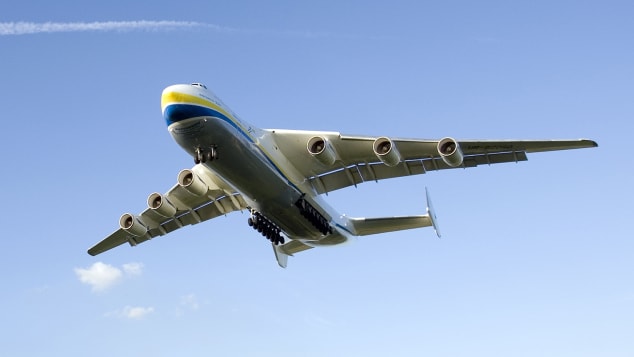 The AN-225 has set numerous world records.

Such capacity would allow the AN-225 to carry up to 16 shipping containers or 80 family cars. The cargo hold also has a titanium floor for added strength and its own crane system to load cargo efficiently. The maximum payload is 250 tons -- reached in 2001 when transporting the five battle tanks. The record for the heaviest single piece ever airlifted was achieved by the An-225 in 2009, when a generator was transported from Germany to Armenia. It weighed 187 tons.

The plane set other records such as the longest cargo item in the history of transportation -- two wind turbines measuring 137 feet each, delivered from China to Denmark -- and clinched a Guinness World Records entry by holding an art exhibition of 500 paintings by 120 Ukrainian artists at an altitude of 33,000 feet.

The AN-225 has also transported water turbines, nuclear fuel, construction vehicles, light aircraft and maglev trains. Electric generators are its most common type of cargo. 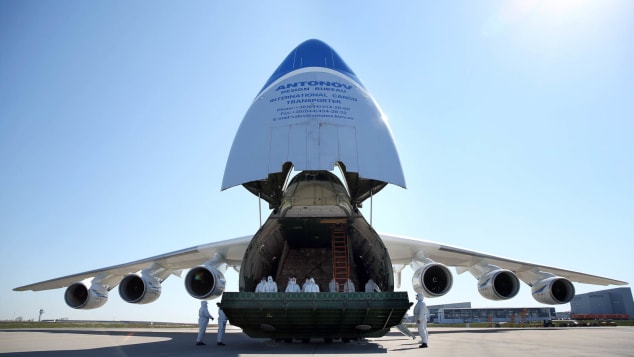 Crew members in protective suits stand inside an Antonov An-225 Mriya cargo aeroplane during a delivery of protective masks from China.

In April 2020, the AN-225 set yet another record by transporting 100 tons of Covid-19 protective equipment, medicines and tests from Tianjin, China, to Warsaw, Poland (with a refueling stop in Kazakhstan). The landing in Poland was livestreamed to an audience of 80,000, according to Antonov.

"We didn't expect the plane to be involved in this business, because PPE packed in boxes is not the standard type of cargo for the An-225, but due to lack of transport availability our customers requested it," said Shost. "Over two and half months we performed 10 flights from China to different points around the world." 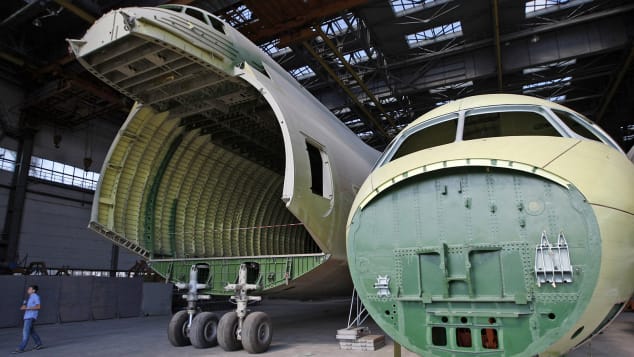 There's a second, unfinished Antonov An-255 languishing in a Kiev factory.

The AN-225 flies sparingly. Its high operational cost -- it uses over 20 tons of fuel per hour according to Shost, equal to $6,700 at current prices -- limits it to the most demanding of jobs.

"Last year the plane performed about 20 flights. In 2020 we are already at 10 flights, and we expect 10 more through the end of the year," Shost added.

That means that the current demand is easily handled by the lone AN-225 in existence. Although Antonov has all the parts required to build a second one sitting in its warehouse, it's not planning to do so anytime soon. China once expressed the desire to purchase the parts and build the plane, but due to the complicated logistics of transporting them abroad, the plan never materialized.

The fact that the AN-225 is one of a kind, however, adds to its mystique.

"This airplane is our pride and joy, a business card for the Antonov company and Ukraine itself," said Shost. "I first saw it when I was a schoolboy and I was so impressed with it, I couldn't believe it could actually fly. Now I make sure it does."

Antonov is constantly upgrading the AN-225 to keep up with international flight regulations and requirements, and the company says that the plane will be in service for at least another 25 years. That's good news for aviation enthusiasts and plane spotters, who show up in droves at its every appearance.

"This aircraft ranks 10/10 on a spotter's dream list, in my opinion," said Casey Groulx, a Canadian plane spotter who photographed the An-225 when it landed in Toronto in late May to deliver Covid-19 relief equipment.

"It was an absolute dream come true as I had always wanted to see this incredible aircraft. There were a lot of other spotters. It felt very special, to have that feeling of having seen the world's biggest plane."