Johnson & Johnson is a member of U.S.-Ukraine Business Council

F.D.A. studies show the shot strongly protects against severe illness and may reduce spread of the virus. But the drugmaker has fallen short of initial production goals.

The coronavirus vaccine made by Johnson & Johnson provides strong protection against severe disease and death from Covid-19, and may reduce the spread of the virus by vaccinated people, according to new analyses released Wednesday by the company and the Food and Drug Administration.

The reports provided confirmation of the initial results announced by Johnson & Johnson late last month, indicating that the United States is likely to soon have access to a third coronavirus vaccine developed in under a year. The F.D.A. could authorize the vaccine as early as Saturday, depending on a vote by its vaccine advisory panel on Friday, and distribution could begin within days.

If cleared, the vaccine would reach a number of firsts for the U.S. pandemic. Unlike the authorized vaccines made by Pfizer-BioNTech and Moderna, which require two doses, Johnson & Johnson’s is just a single shot, allowing the number of fully vaccinated Americans to rapidly increase once it is deployed. More than 44 million Americans have received at least one dose of the Moderna and Pfizer vaccines, but only around 20 million have received a second dose.

Those earlier vaccines use a new technology called mRNA that needs freezers for long-term storage. Johnson & Johnson’s vaccine, which uses sturdier viruses to deliver genes into cells, can keep for three months at normal refrigeration temperatures, making it easier to distribute and easier for pharmacies and clinics to stock. The White House on Wednesday said around two million doses would be ready to allocate to states next week, with up to another two million for pharmacies and community health centers.

The documents published by the F.D.A. on Wednesday showed that the new vaccine had an overall efficacy rate of 72 percent in the United States and 64 percent in South Africa, where a concerning variant emerged in the fall that is now driving most cases. The efficacy in South Africa was seven percentage points higher than earlier data released by the company showed.

The vaccine also showed 86 percent efficacy against severe forms of Covid-19 in the United States, and 82 percent against severe disease in South Africa. That means that a vaccinated person has a far lower risk of being hospitalized or dying from Covid-19. None of the nearly 22,000 vaccinated people in the trial died of Covid-19.

“The vaccine has definitely met the bar of what’s worthy of rolling out and using. It’s performing well,” said Natalie Dean, a biostatistician at the University of Florida. Another authorized vaccine, and especially one that only requires one dose, could block the spread of the virus more effectively and drive down cases faster. “Having more products available is a huge advantage,” Dr. Dean said.

State health departments around the nation have been eager to take advantage of it. In North Dakota, which has one of the nation’s highest rates of vaccination, members of the state’s vaccine ethics committee met this week to discuss the allocation and distribution of the vaccine, anticipating the F.D.A.’s analysis, said Kylie Hall, a vaccine adviser for the state’s health department. The new data may help guide the state’s decisions on which people to prioritize for the small number of doses that may arrive next week, she said.

“It prevents severe disease and death from Covid,” she said. “That’s the best news we could have.”

But access to the new vaccine could be limited at first. Dr. Richard Nettles, the vice president of U.S. medical affairs at Janssen Pharmaceuticals, the drug development arm of Johnson & Johnson, told lawmakers on Tuesday that nearly four million doses would be ready for shipment if the F.D.A. authorizes the vaccine. That is far below the 12 million it had originally pledged to give the federal government by the end of February.

Asked about the shortfall on Wednesday, Jeffrey D. Zients, the White House coordinator of the pandemic response, said that the Biden administration discovered when it took office five weeks ago that Johnson & Johnson was behind on manufacturing and needed federal help in obtaining equipment and raw materials.

“It was disappointing when we arrived,” he said, but “I think the progress is real.” He added: “Obviously the prospect of a potential third approved vaccine is very encouraging,” because lack of supply remains the biggest obstacle to the nation’s vaccination effort. 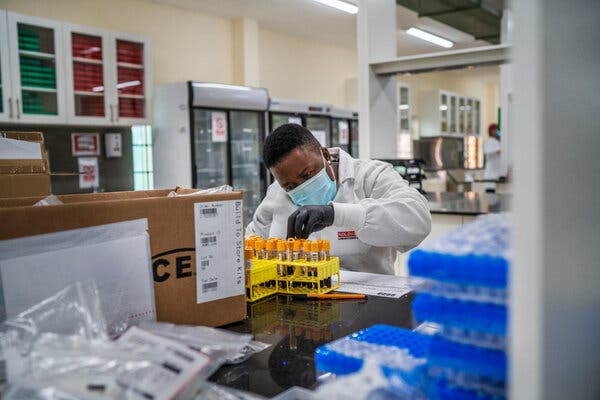 Johnson & Johnson’s vaccine has a lower efficacy rate than the vaccines from Moderna and Pfizer-BioNTech, which are both around 95 percent.

The newly released documents, which include the F.D.A.’s first technical analysis of the company’s 45,000-person clinical trial, presented evidence that the vaccine was safe, with noticeably milder side effects than the Pfizer and Moderna vaccines and without any reports of severe allergic reactions like anaphylaxis.

The vaccine’s protection was consistent across Black, Hispanic and white volunteers, and also across different ages. The trial estimated a lower efficacy, of 42.3 percent, for people over 60 who had risk factors like heart disease or diabetes, a figure that came with a large amount of statistical uncertainty, the F.D.A. noted.

Dr. James Burke, an expert on trial design at the University of Michigan School of Medicine, cautioned that the results found in small subgroups can turn out to be the result of chance. “We’re wrong more than we’re right,” he said. “So we should always tread very cautiously.”

He noted that the trial only recorded 41 cases of Covid-19 in 6,667 people over 60 with comorbidities. “Common sense makes it pretty clear that we can’t make very robust estimates with such a small number of outcomes,” Dr. Burke said.

Preliminary data suggests that the vaccine’s protective effects grow in the weeks after vaccination. After 42 days, for example, only one vaccinated person got Covid-19, whereas 13 people in the placebo group did, which translates to a 92.4 percent efficacy rate. It’s not clear how long the vaccine’s protection will last before it wanes, an uncertainty that hovers over all the coronavirus vaccines, since they have only gone into testing in recent months.

Although several vaccines can protect people from getting sick with Covid-19, it is unclear whether the shots can also prevent people from getting infected and passing the virus to others, leading to a debate about how quickly society can return to normal after inoculations begin.

Moderna’s trial found some hints that vaccinated people were less likely to develop an infection without symptoms. And AstraZeneca found that its vaccine reduced asymptomatic infections by about half.

Johnson & Johnson looked for asymptomatic infections by checking for coronavirus antibodies 71 days after volunteers got a vaccine or a placebo. The new analyses estimate that the vaccine has an efficacy rate of 74 percent against asymptomatic infections. But that calculation was based on a relatively small number of volunteers, and the F.D.A. noted that “There is uncertainty about the interpretation of these data and definitive conclusions cannot be drawn at this time.”

Still, Dr. Dean said the results, while preliminary, were encouraging, especially when combined with other studies suggesting that vaccinated people who did get infected have a lower viral load, potentially making them less infectious.

“I think there’s a lot of good reasons to be optimistic,” she said.