American and Ukrainian energy business leaders met with U.S. Representative Marcy Kaptur over Zoom on June 18 to discuss Ukraine’s progress toward energy independence and security. The webinar, hosted by the 200-member U.S.-Ukraine Business Council and moderated by council president and CEO Morgan Williams, focused on the future of renewable energy  in Ukraine.

The meeting also addressed the ways in which the U.S. Congress is supporting Ukraine’s business endeavors in the renewable energy sector.

In her opening remarks, Kaptur, a Democrat from Ohio, emphasized the need for energy self-sufficiency in Ukraine. She called for the need to “imagine Ukrainian energy independence as a major road forward toward national independence and toward Euro-Atlantic integration.”

She also mentioned U.S. legislation that supported Ukraine’s energy sector, specifically the targeted sanctions put on the construction of the Nord Stream 2 pipeline to counter Russia’s energy coercion. Russia says its pipeline bypassing Ukraine is 94% complete, but U.S. sanctions have halted progress on the completion of the pipeline that, coupled with an existing line, carry 110 billion cubic meters of natural gas directly from Russia to Germany via the Baltic Sea.

Additionally, the U.S. passed legislation to increase funding for the Three Seas Initiative, which funds projects for liquified natural gas, or LNG, infrastructure. Although the initiative does not currently include Ukraine, Kaptur suggested that Ukraine can “benefit from enhanced cross-border activity” on the Ukraine-Poland border as well as “energy grid connections with Hungary.”

With Ukraine’s historic reliance on Russian natural gas, the push for diversification in the energy sector is seen as essential to Ukraine’s national security.

Dale Perry, managing partner of Energy Resources of Ukraine, suggested that Ukraine’s advantage comes in natural gas storage. “Traditional European storages are at their max. So where we and others are putting our gas is in Western Ukraine. That, in and of itself, is good for Ukraine,” he said.  This demand for storage gives Ukraine optionality for its gas supply and reduces the reliance on Russian sources.  Perry announced plans to continue increasing the amount of gas in Ukrainian storage, with the goal of having 1  billion cubic meters of gas in storage by this winter.

“Ukraine, for wind, really has ideal infrastructure,” said Berlin. “We have, along the Black Sea coast, very strong winds.” Berlin also cited old Soviet infrastructure as providing “great opportunities” for the advancement of his company’s project.

His biggest challenge, he said, has been on the political front. “I spend half my time working on the construction management of our wind farm and the other half of my time on the political side,” he said. Berlin has been working closely with the U.S. Embassy to move his goals forward, and noted that U.S. diplomats have been “exemplary.”

Stepan Kozytskyy, a partner at Lviv-based Eco-Optima, mentioned that his company had to stop their development in wind and solar due to some sort of legal blockage in the Verkhovna Rada. He said that he hopes this “uncertainty in the law” will be resolved before the 1st of July so the company can resume work.

Also in attendance was Eugene Lukashevich, the president of the Ukrainian Technological Company. His company builds bioethanol plants in Ukraine and surrounding post-Soviet bloc countries.

Lukashevich noted that under 1% of corn in Ukraine is processed into bioethanol, compared with 25% in the U.S. “Unfortunately, we don’t have a law yet that will insist on using a certain percentage of bioethanol for gasoline, unlike in Europe or in the U.S. This is because we import 80% of our gasoline from Russia and Belarus,” he said. 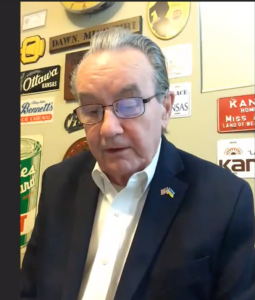 With Ukraine ranking sixth in the world in corn production, the country has the agricultural resources to seriously develop its bioethanol industry.

Additionally, the call for innovation from Ukraine’s scientists was a common theme throughout the event.

“I believe Ukraine must leverage, more fully, its high degree of scholarship in the sciences to innovate and expand more robust domestic energy platforms,” said Kaptur. She gave high praise to the Ukrainian science community, stating that they should be given more recognition and even calling them “genius.”

In addition to a general call for foreign direct investment in Ukraine, the webinar concluded with a suggestion from Kozytskyy for private investors to help build an 80-kilometer pipeline from the Polish-Ukrainian border to western Ukraine.

“Maybe if some private investors from the U.S. are interested in constructing such a project, they are welcome here in Ukraine and we can organize it together.” The project would cost approximately $100 million to complete.