MEMBERS OF THE U.S.-UKRAINE BUSINESS COUNCIL CONGRATULATE
OKSANA MARKAROVA ON HER APPOINTMENT TO THE POST OF
AMBASSADOR OF UKRAINE TO THE UNITED STATES 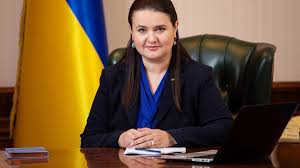 WASHINGTON, D.C. - The over 200 members of the U.S.-Ukraine Business Council (USUBC) congratulate Oksana Markarova on her appointment to the post of Ambassador of Ukraine to the United States.

Oksana Markarova is well known by the members of USUBC as they worked closely with her while she was Ukraine's Minister of Finance.  The members were very supportive of her work and extremely complementary of her during her time as Minister of Finance, according to Morgan Williams, President & CEO of USUBC.

USUBC members were pleased to read that the President of Ukraine Volodymyr Zelenskyy put a strong emphasis on economic diplomacy and in expanding the economic and business activity between the two countries.

President Zelenskyy said in his announcement, "I am also confident that Oksana Markarova will set an example in the development of economic diplomacy: in attracting foreign direct investment in Ukraine, in promoting Ukrainian exports and defending the interests of Ukrainian business, which is a particularly important issue for all our diplomats and what I demand of them.”

"The members of USUBC again congratulate Oksana Markarova on her appointment and look forward to working with her to expand and strengthen the business and economic ties between the two countries," Williams said.