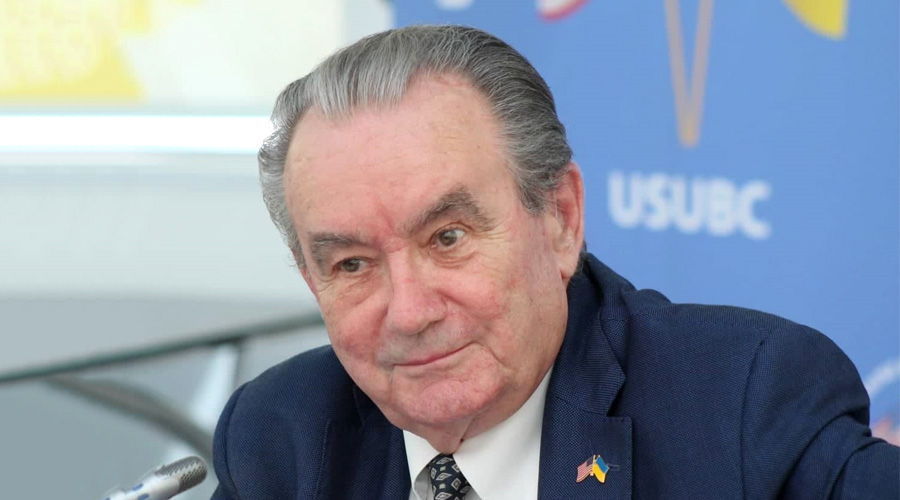 Founded in 1995 in Washington, D.C. with around eight member companies, the US-Ukraine Business Council (USUBC) has grown to a robust membership of over 200 companies and has a proven track record of advocating for the business interests of American companies and other international investors in Ukraine. Having first been involved in Ukraine since the early years after independence in 1991, Mr. Morgan Williams, USUBC president, is more optimistic about this moment in Ukraine’s history than he has ever been. Citing land market reform, energy market reform and privatization as key efforts that will transform the Ukrainian economy, Mr. Williams describes today’s Ukraine as one of the best and most promising places to invest in the world.

You have been president of the US-Ukraine Business Council for over 13 years and were Chairman of the USUBC Executive Committee. You have been called one of Ukraine’s “staunchest American friends”, and have been awarded three state medals from the Ukrainian government. Can you tell us about your career story and how an American from Kansas ended up so deeply involved in Ukraine?

I got involved in both agribusiness and politics in my home state of Kansas. I worked in agribusiness and also closely with the campaigns of Congressman Bob Dole (R-KS). At the beginning of his career in the U.S. Senate, Dole, in early 1969, recommended me to be State Director of the Kansas State Farmers Home Administration (FmHA) with the Department of Agriculture.  Secretary of Agriculture Clifford Hardin made the appointment. The FmHA was in charge of a very large-scale rural economic development program. Through that work, I became interested in the need to expand economic opportunities in rural areas. In 1977 I moved to Washington and worked as a Professional Staff Member of the US Senate Agricultural Committee where Senator Dole was the ranking Republican. The international food and economic programs supported by the Agriculture Committee expanded my interest in international economic development. I then became the president of a non-governmental organization (NGO) that had contracts with USAID designed to help build farmer-owned agricultural co-ops around the world.  We worked in such countries as Haiti, Egypt India and Indonesia.

When the Soviet Union fell, it became clear that there would be many opportunities in the former Soviet states. I teamed up with a friend who was in charge of an NGO and we proposed and won a three-year USAID contract to support and help expand the work of US agribusiness investing in Russia and Ukraine. We started in Moscow, but soon got the call from Washington to open up an office in Ukraine. I first came to Kyiv in April 1993, and since then, almost all of my work has been focused on the business and economic development of Ukraine.  It because very obvious quickly that Ukraine has experienced so many disasters in the past and now needed to take advantage of being an independent country and move forward.

Today, we are seeing the business community, civil society, and the government working together for the benefit of Ukraine

How has the US-Ukraine Business Council (USUBC) grown since it was founded in 1995?

The US-Ukraine Business Council was founded in 1995 with around 15 members, and it only worked in Washington. Now, we have over 200 members and an office in Ukraine. USUBC is the largest country-specific trade association in the world for Ukraine not headquartered inside Ukraine. Ukraine has been slowly developing and now we see a unique moment for many more companies to get invest and do business in Ukraine, as well as for those who already do business in Ukraine to increase their investment.

The main progress we’ve seen over the decades is that although the country has gone through ups and downs, companies, who invested in Ukraine for the long run, have managed not only to survive but also to thrive.  The number one priority for Ukraine today is economic development. Ukraine needs a strong and rapidly growing economy for the people of Ukraine, as a defense against aggression and as a way to keep the US and the EU supporting Ukraine. The people of Ukraine deserve a strong, independent, democratic, prosperous, and private market country with rule of law; this is important and in the strategic interests of the United States and Europe.

What would you share about the experience of American companies in Ukraine to assuage concerns of potential American investors who have seen Ukraine in the US news lately and are concerned about the stability of the market?

Ukraine has been very fortunate in that over its difficult times the EU and the US have supported them as allies and trade partners, and that large international private businesses have stayed in Ukraine. When you are a big company like Coca-Cola, Johnson & Johnson, Cargill, ADM or John Deere when you enter a country, it is for the long run. The international business community has been committed to Ukraine. They may have had to slow expansion plans or cut back at times, but they did not leave. We see two main factors driving change here: the development of private business, and the development of civil society. Today, we are seeing the business community, civil society, and the government working together for the benefit of the people of Ukraine.

The Ukrainian government is undergoing sweeping reforms and you have written and spoken in favor of them, writing, “now is the time for Ukraine to move forward rapidly to accelerate economic growth through major, market-driven reforms”. Which reforms do you see as most exciting and urgent, and why must Ukraine implement these reforms right now?

Over the years, reforms in Ukraine have been slowly implemented, however, a lot of the major reforms just did not take place. Now, President Zelensky has arrived with an ambitious agenda, and most importantly, there is a new parliament that is supportive of the new president and his agenda. No president before him has really managed that.

In any country when you need to pass major reforms quickly you need to have the support of parliament. The number one reform that Ukraine has put off for 25 years is to develop a land market. The agricultural land is the country’s most valuable asset. Ukraine is the only country in the world with one of the best land assets that still doesn’t have a land market. The sale of state assets is another big reform.

There are thousands of state-owned enterprises that are inefficient and breed corruption. A third priority is opening up their energy market. They have just started opening the energy market, but right now there’s not one major US energy company invested in Ukraine. They’ve all come and left. The market is currently dominated by state monopolies.

The railroad system is also a major blockage. It is a huge, state-owned monopoly that has been the center of major corruption.  It doesn’t have adequate equipment to move goods and prices often aren’t transparent. The railroad (UZ) has been fighting de-monopolization and privatization. They’re very strong, and very well connected. The battle here between the past and future still goes on. However, this new government is quite committed to breaking through these blockages.

We’re very optimistic about Ukraine. We think it currently has the best chance for transformational change that is has ever had

How has the US-Ukraine Business Council advocated for American business interests over the years, and what areas are you currently working on?

After the Orange Revolution, one of the first battles we fought was against attempts by vested interests and the government to control all agricultural exports. We also fought on VAT tax repayment. The government would collect VAT taxes here and then forget to pay them back. When Yanukovych came into office, Ukraine owed private companies $3 billion, and in order to get their money back, individual companies had to drag the battle into the courts.

We, and other business organizations, led that battle for a long time, towards establishing a modern VAT repayment system. Another area we’ve been fighting is against corruption in the courts because Ukraine does not have a way to resolve conflicts through negotiation. Here, if you get fined, there is no opportunity for recourse.

Intellectual property rights are another big issue here. There are many agricultural companies, for instance, that will not bring modern seed varieties to Ukraine because they can’t guarantee they won’t be counterfeited. There are an endless number of things like this that restrict business and impact decisions.

What are your final thoughts on why US investors should now take notice of investment opportunities in Ukraine?

We’re telling private companies Ukraine is a very good place to do business. Ukraine has a great future. There are many companies doing well here. We say, you should forget all of your assumptions and preconceived notions and come out here to see for yourself. You need to be on the ground in Ukraine. We’re very optimistic about Ukraine. We think Ukraine currently has the best chance for transformational change that it has ever had.

The list of reforms that the president came out with includes major reforms that partners like the US and EU have asked for in the past. If the current government executes on half of what it has promised, the impact will be tremendous. This is a very untapped market. The potential for agricultural production, tourism, and investment across industries makes it one of the best places in the world to invest. To me, Ukraine is in a new phase of growth; it is not finally emerging. If you’re a major company that is not here, you should be here.