Out Went The Cabinet, In Came The Coronavirus: Pressure Mounts For Reforms In Ukraine 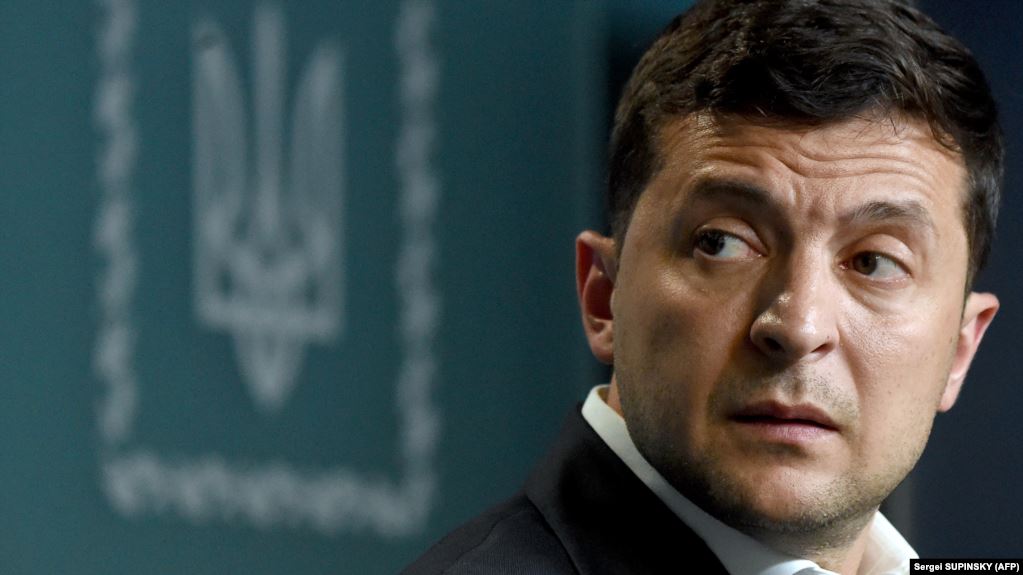 Ukrainian President Volodymyr Zelenskiy had the wind at his back last year.

Following his landslide victory in April with 73 percent of the vote, he became the first president to have a majority in Ukraine's parliament when his party, Servant of the People, swept national elections three months later.

That gave him the mandate and the power to push through long-awaited reforms seen as needed to attract investment and improve a struggling economy sapped by corruption and a continuing war against Russia-backed separatists in the east.

There was a powerful potential obstacle in Ihor Kolomoyskiy, the influential metals and banking tycoon who backed Zelenskiy's rise to power. The new president would be beholden to him, many feared.

Fast-forward to early March of 2020, when an abrupt move by Zelenskiy deepened those fears.

The comic-turned-president unexpectedly fired the six-month-old cabinet led by Prime Minister Oleksiy Honcharuk, immediately triggering concerns that he was turning his back on reforms needed to lock in a $5.5 billion loan from the International Monetary Fund (IMF).

Cabinet members sent packing had done months of intense work on land reform and banking rules that are conditions for the IMF deal. Projects in the works included a law that would block Kolomoyskiy – who has expressed disdain for the IMF -- from recovering his financial vehicle, Privatbank, which the state took over in 2016 following a multibillion-dollar bailout.

Then came the coronavirus.

With little warning, the COVID-19 pandemic sparked the worst global economic crisis in more than a decade, increasing Ukraine's demand for cash to aid citizens and businesses hit by the economic effects of the coronavirus while also effectively shutting it out of international bond markets -- and making help from the IMF seemingly indispensable.

All of a sudden, it seemed like the dismissal of a government that had the confidence of Ukraine's Western backers -- a move that already had potential investors, observers, and advocates of reform in Ukraine scratching their heads in disbelief -- could not have come at a worse time.

“On March 4 the government still felt they were in a wonderful situation. They thought they could borrow as they wanted” from international investors, Anders Aslund, an analyst at the Atlantic Council, a Washington-based think tank, said during a web-based seminar on March 20.

With the COVID-19 pandemic spreading globally, Ukraine may now need $10 billion, Aslund said, adding that Kyiv would have "no choice" but to agree to the IMF conditions.

Failure to secure a deal could be devastating, economists said.

Elina Ribakova, deputy chief economist at the Institute of International Finance in Washington, called such a possible scenario a "double whammy" that would likely push Ukraine's economy into a recession later this year.

"Money is flowing out of all emerging markets because of the virus, but the lack of an IMF deal will make things much worse for Ukraine," says Evghenia Sleptsova, an economist at Oxford Economics in London. She calls the government reshuffle "really bad timing."

"Unless they have really gone mad, they have no choice but to sign an IMF deal," Sleptsova says.

The grim prospects seem to raise the possibility that Kyiv will take steps needed to reassure the IMF.

Honcharuk's replacement, Denys Shmyhal, said on March 18 that the government was continuing to negotiate the $5.5 billion loan, while central bank chief Yakiv Smoliy said he was seeking additional IMF funding to help fight the effects of the coronavirus.

Ukraine had 47 confirmed cases of the virus as of March 21, fewer than its neighbors, but reported three deaths and has imposed similarly tough measures in a bid to curtail the spread of the coronavirus -- including virtually sealing the border and shutting down nonessential stores in many cities.

Boosting spending to help individuals and industries weather the crisis will widen Ukraine's budget deficit and increase its need for credit at a time when its international borrowing rates have skyrocketed to double digits.

The ratio of Ukraine's government debt to its gross domestic product (GDP) -- a key indicator of a state's financial sustainability -- had dramatically improved, dropping from about 81 percent in 2016 to below 60 percent last year. But with a large portion of the debt in dollars, the hryvnya weakening fast, and a much larger deficit on the horizon, that ratio will spring higher.

Ukraine's foreign-currency reserves could also come under pressure. The country's reserves reached a multiyear high of nearly $27 billion in February, equivalent to slightly more than four months of imports, according to Sleptsova. Three months of coverage is seen as the minimum safe level.

While the country's monthly imports will decline in value along with the price in oil, which has tumbled by half over the past month, reserves could shrink as the central bank sells dollars to support the hryvnya.

In December, Ribakova forecast a decrease of $7 billion in Ukraine’s foreign currency reserves in 2020 under her "negative" economic development scenario – which included no IMF deal.

Zelenskiy dismissed his government on the grounds that economic performance wasn't strong enough. The move may have been driven in part by the desire to reverse a decline in his poll ratings, but both Western and Ukrainian advocates of reform warned it was misguided and unnecessary.

Though Ukraine's industrial production had weakened late last year, other indicators inspired confidence: the cost of borrowing had come down significantly, inflation had dropped, foreign-currency reserves increased, and salaries rose in real terms.

"It is very hard for investors to understand the reasons for the change and the choice of timing," Ribakova says.

Morgan Williams, the president of the U.S.-Ukraine Business Council, a Washington-based lobby, says the government upheaval and reform delay has put some foreign investment on hold. Land reform is expected to drive economic growth in Ukraine, an agricultural powerhouse.

The March 4 shake-up swept out Honcharuk, who some observers said may have irked Kolomoyskiy days earlier by seeking to replace a state-company manager believed to have the support of the tycoon. Reformists in the outgoing cabinet also included Finance Minister Oksana Markarova, who had long-standing relations with the IMF, and U.S.-educated Economy Minister Tymofiy Mylovanov.

Prosecutor-General Ruslan Ryaboshapka, seen by supporters as a fighter of corruption, was let go the following day. All four officials had the confidence of Kyiv's supporters in the West.

Ukraine had reached a tentative agreement with the IMF on the $5.5 billion loan in December, after a months-long push, and many expected it would be completed by the end of March.

However, the two sides have reportedly not reached agreement on the bank reform that blocks Kolomoyskiy's bid to recover Privatbank.

In May 2019, the tycoon told the Financial Times that Zelenskiy should reject the IMF’s austerity program.

Ribakova says that she doesn't see the IMF deal "anywhere close to being finalized."

Williams says that, particularly with the coronavirus pandemic adding to the financial pressures on Ukraine, it's time for Zelenskiy to bite the bullet. "He had everything he needed. He had all the power he could want, but they didn't get the reform job done," he says. "It is time for the president to quit talking and act."