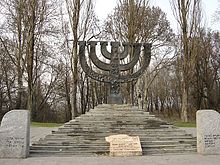 President Barack Obama today announced the designation of a Presidential Delegation to attend the Commemoration of the 75th Anniversary of the Babyn Yar Massacre on September 29, 2016 in Kyiv, Ukraine.

The Honorable Penny Pritzker, Secretary of Commerce, will lead the delegation.

Members of the Presidential Delegation