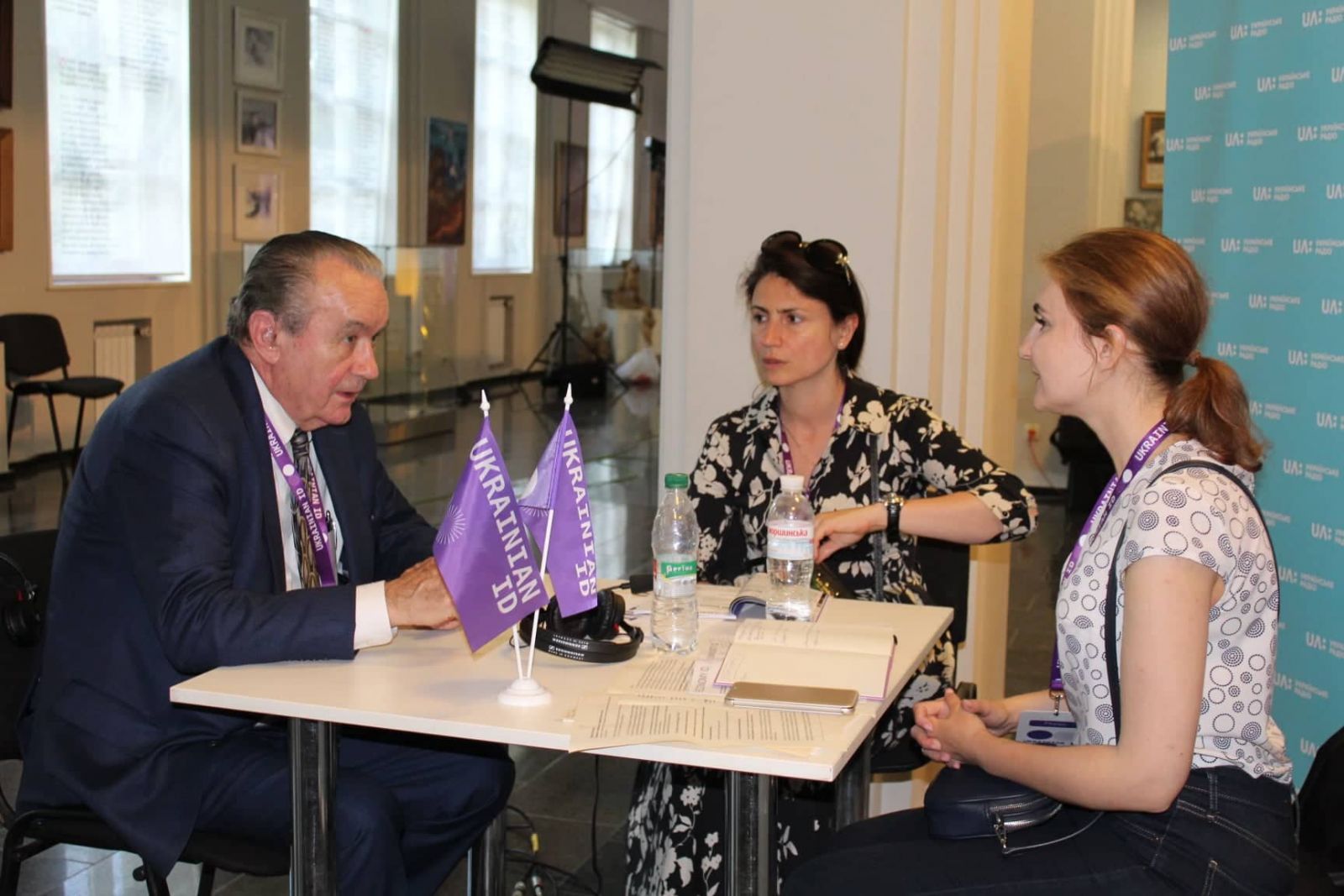 Olena Zelinchenko: I sincerely greet all the listeners, who are today with us. But in reality, the visiting studio of the Ukrainian Radio is in Kaniv. I am Olena Zelinchenko and we work here, as exactly in Kaniv the Second Economic-Humanitarian Forum is happening.

We have already had time to talk with our previous speaker. And now we have a possibility to talk to the President of the US-Ukraine Business Council, Morgan Williams, who just now has left the panel, who can tell us a lot about business climate in Ukraine, about corruption risks, which unfortunately are very high in Ukraine. Maryna Antonova, the interpreter, who also represents the US-Ukraine Business Council. Greetings to you.

Olena: So, first of all, Mr. Morgan, you have spoken a lot today about demonopolization in the panel, which has finished. And you have also spoken a lot about the fact, that there are big corruption risks in Ukraine. You have devoted a lot of time to this topic. What can you say to our listeners.

Morgan: The main challenge for Ukraine is the economic growth. We’ve come a long way but we have to find more ways to attract investment to Ukraine from Ukrainians and from international companies.

Two of the major blockages to private investment is the energy market monopoly and the railroad monopoly.

The third limit is that there is no private market for land.

This three areas are costing billions of dollars of investment, because of the way they are run in Ukraine.

80% of the gas is produced here by the state monopoly. Gas prices are too high and there is not enough gas. Ukraine could be much more energy independent, if they would open up to the private market.

And also, Ukraine’s largest and greatest asset is land. And the government of Ukraine is stopping land from being in the land market and stopping it from helping economic growth. Stopping it from allowing it to be used by the private sector to create wealth for the people of Ukraine.

Olena: Mr. Morgan is talking a lot about the problems, which in reality we also realize. And it’s understandable that on the local level, if we talk about decentralization, and on the highest level the central government is trying to put as efforts. A lot of reforms are happening in Ukraine. How does Mr. Morgan evaluate these reforms, particularly in the economic sector, which is his domain, his direction?

Morgan: Well… since the Revolution of Dignity, Mr. Putin came and Mr. Yanukovich left, there has been quite a bit of progress. The economic system is much better now. But there is still a lot to do.

Ukraine’s best defense against Mr. Putin in his desire to keep Ukraine weak is to have a strong growing economic system.

And European Union, the United States and others say: we want to continue strong support of Ukraine. But to do that Ukraine needs to reform and increase its economic system.

So, for the wealth of the people of Ukraine, for their defense against Mr. Putin, and their desire to keep the West involved in all of the involvements around, the ability of the new government to do what is necessary to increase Ukraine’s economic growth.

So, the private sector, business sector and civil sector has got to do a lot more to encourage and force the government to brake up these state monopolies that are stopping investment.

Olena: I will remind our listeners that the visiting studio of the Ukrainian Radio, of the social voice, is today in Kaniv. We are in the Second International Economic-Humanitarian Forum “Ukrainian ID” And the President of the U.S.-Ukraine Business Council, Morgan Williams is next to me in the visiting studio. We are talking today about the changes, which Ukraine needs. We are talking about the direction in which we are moving. This is the correct direction. The most important is to be more active. But the we also remember that there are factors, for example such as Presidential elections, change of power in Ukraine, how the business reacts. As before this it was also known that the investment climate depends on the fact, which changes are happening in the political life of Ukraine, as now.

Morgan: The international business community that I work with – they are very much committed to Ukraine in the long run. Many of them have been her since the 1990es, and they plan to be here in 2020 and 2030. So, they take a long-time view of Ukraine. They are not here just to invest today and to leave tomorrow. There are a lot of other difficult countries around the world. So, would like to take the course of political stability. And so they very optimistic. They are gonna support this new government, they are gonna do their best to work with them. We know in the United States and EU: the government is the government and the people have elected the government.

So, we really have the only choice and to work with the present government to get them to do more to bring about reforms. They said they are gonna bring a lot of reforms. But it’s more difficult to implement them. And the Parliament elections are important. Many of the blockages in the reforms are in the people in the Rada. More people need to be in the Rada to support reforms. So, it’s not just the President, the Rada elections are just as important as the presidential election to bring more reform in the area of agriculture business.

Agrobusiness is number one sector for international companies. Number two would be energy. They want to come in here and have rights to drill for oil and gas, they would like to be able to set up more solar and other types of energy systems. So, energy and agriculture are two of the biggest.

Another one of course is tourism and hotels. But we need to keep more people coming and going to create more support for business industry.

So, those are some of the biggest business opportunities for Ukraine. And so much of it depends upon the new government – convincing people.

Olena: Thus, there are things to work on. And we thank the international partners, who get involved and help us to reform in the right direction, to do this actively. I will thank Morgan Williams, the President of the U.S.-Ukraine Business Council, who participated today in the visiting studio of the Ukrainian Radio in Kaniv at the Second International Economic-Humanitarian Forum “Ukrainian ID”. Revolution of Values – under such name the event is happening this year. And by the way, according to the summaries of the Forum and the civil society discussions – different topic will be discussed here for two days, - they plan to issue the “Constitution of Values” – such a symbolic document.

And at this point – this is it. I, Olena Zelinchenko and also the interpreter Maryna Antonova, a representative of the U.S.-Ukraine Business Council, Olena Lubochenko, my colleague from the edotial of the inomovlennya of the Ukrainian Radio, Mykola Bobrov and Vladislav Scovronskyi are saying good-bye to you till the next meeting.