Remarks by Ambassador Pyatt at the New Ukraine Investment Conference 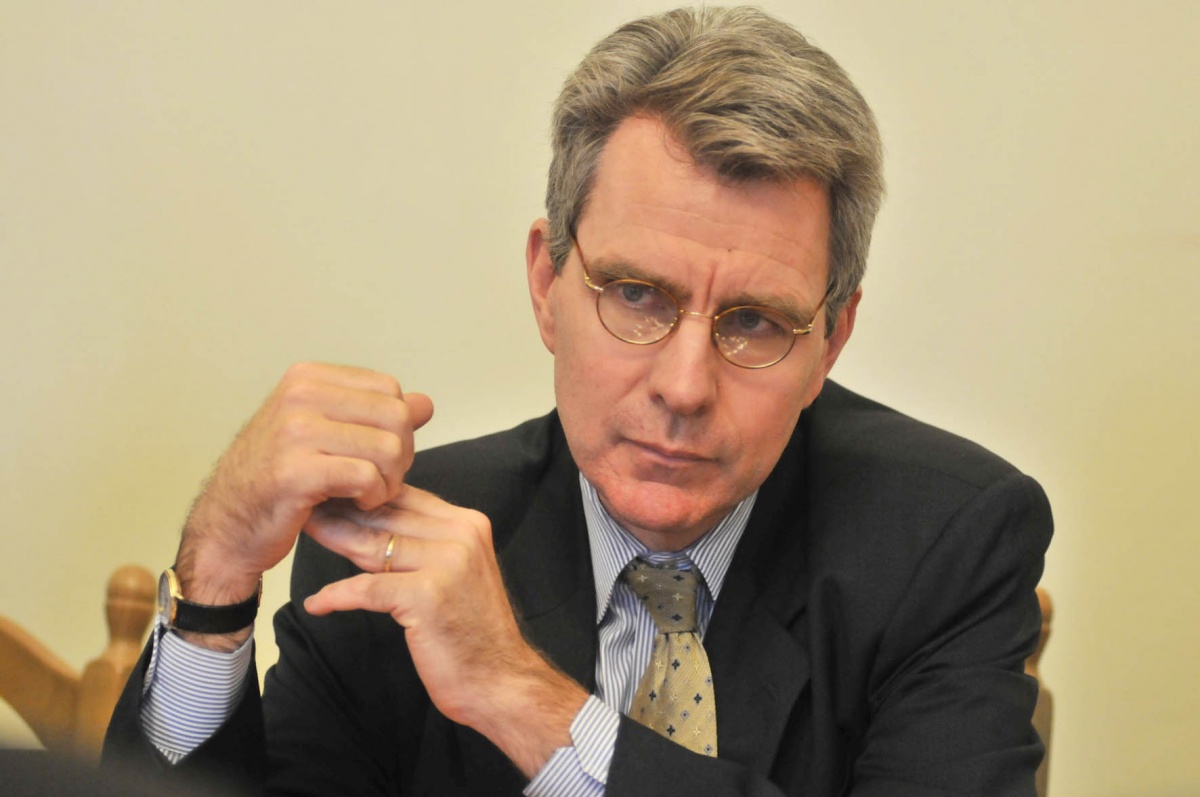 AMBASSADOR PYATT:  Thank you.  If I speak from the chair, I think it’ll give way to a more conversational discussion.  First of all, let me say thank you very much to Empire Capital for having me here today.  It’s a special pleasure for me to be sitting where I am between two hugely talented friends and colleagues.

Dmytro Shymkiv has been one of the greatest champions of reform in the Ukrainian government since President Poroshenko’s arrival in office.  And it is the presence, the continued presence and voice, of people like him in circles of decision making here that make me optimistic about Ukraine’s long-term prospects.

And then Steve from Citibank has been a pillar of the American business community, but he has another claim to fame, which I will note this morning in particular, which is that it’s Steve who gave me the opportunity first to meet Jamala.  And I know that for, especially, all my Ukrainian colleagues here today, anything that I say is irrelevant against the background of Jamala’s terrific, inspiring victory in Stockholm on Saturday in the Eurovision competition.  So thanks, Steve, for that.

In any case, just to set the tone with a couple of opening remarks, and then I hope we can have a dialogue.  I will say it again:  I am feeling more optimistic about Ukraine, about the prospects for Ukrainian reform, than I have felt in about 12 months right now.  I think we are in a very hopeful moment.

A lot of the reasons were detailed by Bohdan in his opening remarks, so I won’t repeat them, but the most important single indicator -- the most important single cause for optimism -- is the clear signal that has come from Prime Minister Groysman, and his new government, of the commitment to sticking to the path of reform, the commitment to capitalizing on the very tough measures that Prime Minister Yatsenyuk and his government implemented, in terms of implementation of the IMF package, in terms of transformation of the energy sector, in terms of revision to things like the government procurement process and ProZorro, that Bohdan talked about, the cleaning up of the financial sector, which doesn’t get enough attention, the fact that Governor Hontareva and the very professional team at the Central Bank have managed to close more than a third of Ukrainian banks without the financial system wobbling as a result of that.

So there is cause for great optimism.  This should be a very wealthy country.  Ukraine has enormous, enormous untapped potential.  It has some of the best agricultural land in the world.  It has very strong human capital.  It has strong traditions in areas like metallurgy and avionics.

It has an emergent high-tech technology industry which Dmytro knows well.  And critically important, it has both the technical capacity -- the science, engineering, technology and training base -- but also the democratic culture that allows for the flourishing of a knowledge-based industry, something Dmytro and I were talking about.  I was at my daughter’s graduation this weekend and Larry Ellison was one of the speakers there.  And every time you hear people in Silicon Valley talking about how they came to their success, you realize that Ukraine has all the same ingredients, and it’s just a matter of tackling the issues that Bohdan alluded to, which are the questions of governance.

Number one priority right now, of course, is the implementation of the IMF program.  There are important steps that now need to be approved by the Rada.  And I would flag, I think, as the most important single risk factor for Ukraine over the next couple of weeks, the attitude of the Rada and the ability of the President, Prime Minister, former Prime Minister Yatsenyuk to continue to maintain discipline inside the Rada, to get the Rada to take the difficult steps that are part of capitalizing on the progress that has been made over the past 18 months in order to sustain the green shoots of economic recovery which are already visible in the Ukrainian macro-economy.

Bohdan alluded to the issue of corruption, which is probably the single greatest impediment to unlocking greater foreign investment in Ukraine, which over the long term is going to be the driver of rapid growth, getting investors like yourselves to come back into Ukraine.

We are encouraged by the appointment of a new Prosecutor General, and I was very encouraged to hear Bohdan’s positive assessment of Yuriy Lutsenko, which meets my own.  Lutsenko is a patriot.  He’s clearly someone who is interested in building a European Ukraine.

But unfortunately, he inherits an institution which is corrupted from top to bottom.  And this is not just a matter of changing one institution.  As I said famously last October in Odesa, it’s about the Office of the Prosecutor General, the whole system, which is in need of root and branch reform, as Ukraine has accomplished successfully, for instance, with its new Patrol Police, which is an example of how it’s possible to change institutions in this country in a way that generates enormous goodwill among the Ukrainian people, because Ukrainians want to see these institutions move ahead.

And I think that’s one of the other things, for those of you who are operating in a global environment, one of the key positive factors about Ukraine today is that this is not a country that is suffering from reform fatigue.  In fact, when you look at the public opinion data, what it makes clear is that most Ukrainians want to see reform move faster.  They aren’t complaining about the pace of reform; they’re complaining that reform hasn’t come fast enough.  And that’s what’s going to continue, I think, to incentivize those like Dymtro and the others, who have dedicated their professional lives now to building this new country, to continue to move the system forward.

A couple of quick remarks, and then I will hand it over, and look forward to the conversation.  Especially for Ukrainian business, I think it’s very important that Ukrainian business continues to maintain an active voice in favor of reform, making clear (inaudible) what you see as the priorities going forward.  I’m absolutely convinced that 2016 is going to be the year which will determine whether or not Ukraine moves successfully on an irreversible path of becoming part of the European family of nations in the fullest institutional sense.

This is the year in which the gains of the Revolution of Dignity can be locked in and the process of reform can be made irreversible.  That clearly is the goal of Prime Minister Groysman; I know that from my conversations with him.  That’s the goal of former Prime Minister Yatsenyuk, who has committed to support.  And I think one very positive factor for Ukraine right now is the fact that former Prime Minister Yatsenyuk has made clear his commitment to supporting Groysman’s success.  That will help going forward through what is necessarily going to be a difficult process of reform.

Bohdan mentioned of couple of the other key leading indicators.  Privatization is obviously one.  Privatization is important both in order to improve an investment climate, but also to eliminate the use of state assets as sources of illicit profits for key oligarchic and political groups inside the Ukrainian political system.  So how this privatization process goes forward is a key indicator to watch.  We will be particularly focused on the upcoming privatization of the Odesa Portside Plant, the largest fertilizer plant in Europe, and that will help, I think, set either a positive or a negative tone for the larger process of privatization that lies ahead.

I’m very encouraged by my conversations last week with the new Minister of Infrastructure.  Minister Omelyan is clearly focused on consolidating the move toward corporate governance in these large state enterprises.  There have been successful new international competitions to attract new bosses for the Ukrainian railways, for the Ukrainian Post.  Not surprisingly, the sectors that have been more resistant to that kind of corporate-based change are those which are attached to energy, which is the sector which has been the traditional Bermuda Triangle of corruption in Ukrainian politics.

It’s been used by Russia to distort politics in this country, it’s been used by oligarchic groups to hold on to their levers of power, and it has been a huge disincentive to the kind of growth that Ukraine should be able to achieve over the long term.  But it’s exactly that kind of oligarchic system that I know Minister Omelyan, Prime Minister Groysman, are committed now to breaking up.  So we’ll be keeping a close eye on how that process of corporate reform of state-owned enterprises goes forward.

And then finally, to finish where I began: it’s all about the IMF.  The United States is committed, and Prime Minister Groysman and President Poroshenko spoke last week to Vice President Biden, who reaffirmed the United States’ commitment now to move ahead with a third billion-dollar loan guarantee.  We hope that the signing of that will happen relatively soon.  In fact, Vice President Biden has invited Prime Minister Groysman to visit Washington next month in order to carry this process forward.

But the key is going to be the completion of negotiations between Ukraine and the IMF on the disbursement of the next tranche of IMF assistance, and then the Rada’s commitment to continue making the tough votes that are going to be necessary to consolidate success and to lay the foundation for what should be a long-term growth trajectory in this country.

So let me stop there, and again, I look forward to the conversation.