Stefan Romaniw: The flame burns brightly on
the 87th anniversary of the Holodomor 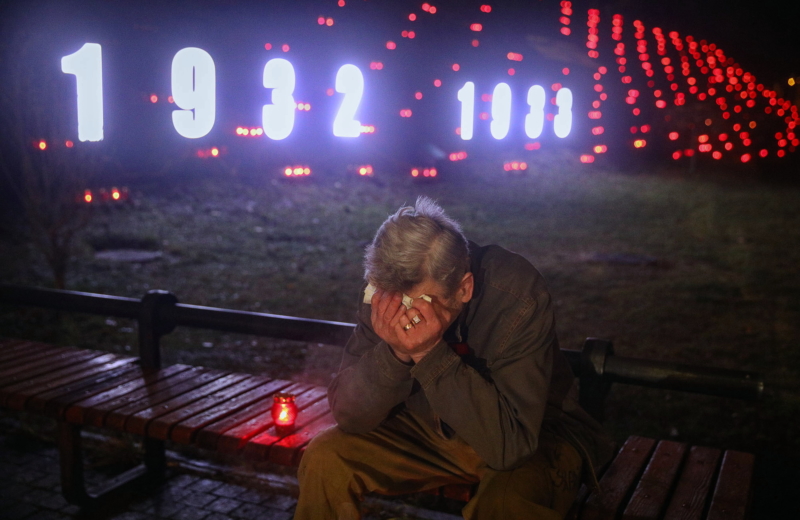 By Stefan Romaniw, the first vice president of the Ukrainian World Congress and chair of its International Coordinating Committee on Holodomor

A man weeps as he attends the Holodomor Victims Memorial commemoration ceremony in downtown Kyiv on Nov. 25, 2017. Holodomor was a Joseph Stalin’s genocide against Ukrainian nationalism that starved to death 3.9 million Ukrainians during 1932-1933.
Photo by Volodymyr Petrov

On Nov. 28 – the fourth Saturday in November, Ukrainians throughout the world will unite on Holodomor Memorial Day in remembrance of the victims of one of the most heinous crimes of the 20th century, the Holodomor-Genocide.

The facts of the Holodomor can no longer be disputed. Scholars of many backgrounds have documented this genocidal murder of Ukrainians which paralyzed a nation for decades. Survivors have bravely shared their stories, appealing to the world to keep the Flame of Remembrance burning bright. On this 87th anniversary, the Ukrainian World Congress (UWC) together with the Ukrainian diaspora reaffirms its commitment to respectfully honoring the past while working determinedly toward recognition of the Holodomor-Genocide by the international community.

The scholarly evidence is plentiful.

“In the case of the Holodomor, this was the first genocide that was methodically planned out and perpetrated by depriving the very people who were producers of food of their nourishment (for survival)…” – Prof. Andrea Grazioso, University of Naples.

“Ukraine was already experiencing an appalling famine. Millions of people had been driven to the greatest desperation, to a life sometimes even worse than death.” – Mendel Osherowitch.

“It was the big story in all our talks in Moscow, everybody knew about it… Anyone you were talking to knew that there was a terrible famine going on.” – Malcolm Muggeridge.

Then there were the apologists.

Walter Duranty wrote in The New York Times that “any report of a famine in Russia is today an exaggeration or malignant propaganda,” and that “there is no actual starvation or deaths from starvation.”

Professors R. W. Davies and Stephen G. Wheatcroft concluded: “The famine was man-made but unintentional. It was a combination of rapid industrialization and two successive bad harvests (1931 and 1932) were the primary reason of the famine.”

The apologists then and today continue to deny and fabricate, or endeavor to rewrite the facts that have already been confirmed. The UWC continues to refute these accounts.

From the time the famine raged in Ukraine, the commitment of the UWC and the diaspora to raising awareness of the Holodomor cannot be understated.

At the time in 1933, the Ukrainian Women’s Association in the USA was sending supplies to Ukraine. At the request of the UWA in Lviv, Ukraine, on Oct, 1 1933 ,the USA Association appealed “to All Women in our Cultured World – We need your support.”

In the 1950s mass demonstrations in the diaspora highlighted this crime. In 1953, in Sydney and Melbourne, Australia, we saw huge outpourings on the streets to raise awareness in the broader community. The same was replicated in many countries

The US Commission on the Ukraine Famine was established in 1985 “to conduct a study of the 1932–33 Ukrainian Famine in order to expand the world’s knowledge of the famine and provide the American public with a better understanding of the Soviet system by revealing the Soviet role.”

The Commission presented 19 findings to the Congress verifying that the Holodomor occurred and that the Soviet regime was responsible. James Mace reported on behalf of the Commission, “Joseph Stalin and those around him committed genocide against Ukrainians in 1932-33.”

In 1988, the World Congress of Free Ukrainians (today UWC) established the International Commission of Inquiry into the 1932-33 Famine in Ukraine which presented its findings to the UN Commission for Human Rights.

Resolutions and declarations continue to be adopted in national Parliaments and various levels of government recognizing the Holodomor as Genocide. To date 16 countries have recognized the Holodomor as an act of genocide, the most recent addition being Portugal. The UWC, in partnership with its membership and the Ministry of Foreign Affairs of Ukraine, continues to promote recognition of the Holodomor as genocide with a current focus on Germany and New Zealand.

A memorial was built in Kyiv which has become an obligatory destination on the itinerary of all international dignitaries to honor the victims. More recently, the UWC has partnered with the Society Memorial and the Government of Ukraine in building the second phase of the National Holodomor-Genocide Museum in Kyiv.

Commemorations have continued annually and countless memorials have been erected throughout the world in honor of the Victims of the Holodomor.

On 75th anniversary of the Holodomor a new era of international action commenced.  The UWC and the Government of President Viktor Yushchenko refocused the need to raise awareness in Ukraine and internationally with the motto Ukraine Remembers – the World Acknowledges. A Flame of Remembrance travelled through 33 countries spreading the word, raising awareness.

Intense activities on the 80th and 85th anniversaries again focused on uniting the world in remembrance.

A postcard campaign, Strip Duranty of the Pulitzer Prize, resulted in Duranty’s portrait being taken off the wall of the New York Times corridor.

A campaign initiated by the Canadian National Holodomor Awareness Tour to have the word Holodomor recognized in dictionaries is well underway.

Holodomor institutes, educational materials and school curricula, the prominent Holodomor monument near Union Station in Washington, DC, the internationally acclaimed multi-media art installation Project MARIA, and so many other elements are now part of the international fabric woven with the words – We will not forget.

Films Holod 33, Bitter Harvest,  Mr Jones together with many publications  – Robert Conquest’s Harvest of Sorrow, Rafael Lemkin’s definition of Genocide, Dr. Lubomyr Luciuk’s publications, The Holy See and the Holodomor: documents from the Vatican Secret Archives on the Great Famine of 1932-1933 in Soviet Ukraine  and the translation of Mendel Osherowitch’s How People Live in Soviet Russia: Impressions from a journey, and many more attest to the fact that the Holodomor is deemed as history that must be remembered, documented and shared.

So how do we ensure continuity?

On the occasion of the 87th anniversary the UWC has initiated the International Holodomor Descendants’ Network – guided by the intent to never let the world forget. Today, generations of children, grandchildren and great grandchildren of those who lived through the Holodomor will work together with the UWC to keep the Flame of Remembrance burning brightly.

It is incumbent on these generations, on each and every one of us, to ensure that the tragic loss of life through forced hunger, motivated by political greed, continues to be exposed. The UWC will continue in this vain!

Stefan Romaniw is the first vice president of the Ukrainian World Congress and chair of its International Coordinating Committee on Holodomor.

LINK to the article: https://www.kyivpost.com/article/opinion/op-ed/stefan-romaniw-the-flame-burns-brightly-on-the-87th-anniversary-of-the-holodomor.html