THE BRUTAL ALTERNATE WORLD
IN WHICH THE U.S. ABANDONED UKRAINE 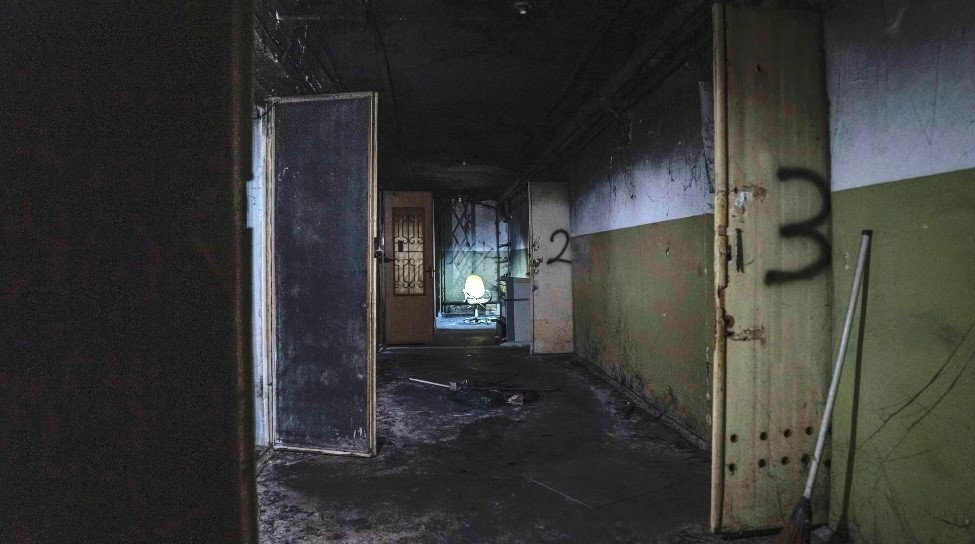 On the shortest day of the year, after 10 months of war, the Ukrainian president, Volodymyr Zelensky, finally left his country and came to Washington to thank Americans for their support. He went to the White House, where he appeared at a press conference. He went to Congress, where he handed a Ukrainian flag, signed by the defenders of Bakhmut, to the vice president and House speaker. He congratulated all of us on our first, joint American-Ukrainian victory: “We defeated Russia in the battle for minds of the world.”

On the eve of the invasion, some American experts advised against offering military aid to Ukraine, on the grounds that the war was going to be over too quickly. Other Americans repeated Russian propaganda, questioning whether Ukraine deserved to exist or whether it deserved to be defended. Some American politicians echoed those views and indeed continue to do so. What if they had prevailed? What if a different president had been in the White House? What if a different president had been elected in Ukraine? Let’s imagine, just for a moment, a world without Ukrainian courage, or American and European weapons, or the unity and support of democracies around the world.

Had the Russian plan been carried out as it was written, Kyiv would have been conquered in just a few days. Zelensky, his wife, and his children would have been murdered by one of the hit squads that roamed the capital city. The Ukrainian state would have been taken over by the collaborators who had already chosen their Kyiv apartments. Then, city by city, region by region, the Russian army would have fought the remnants of the Ukrainian army until it finally conquered the entire country. Originally, the Russian general staff imagined that this victory would require six weeks.

Had all of that happened as planned, Ukraine would now be pockmarked with the concentration camps, torture chambers, and makeshift prisons that have been discovered in Bucha, Izyum, Kherson, and all the other territories temporarily occupied by Russia and liberated by the Ukrainian army. A generation of Ukrainian writers, artists, politicians, journalists, and civic leaders would already be buried in mass graves. Ukrainian books would have been removed from schools and libraries. The Ukrainian language would have been suppressed in all public spaces. Hundreds of thousands more Ukrainian children would have been kidnapped and transported to Russia or trafficked farther around the world.

Russian soldiers, strengthened by their stunning victory, would already be on the borders of Poland, setting up new command posts, digging new trenches. NATO would be in chaos; the entire alliance would be forced to spend billions to prepare for the inevitable invasion of Warsaw, Vilnius, or Berlin. Millions of Ukrainian refugees would be living in camps all across Europe, with no prospect of ever returning home; the tide of sympathy that originally greeted them would have ebbed long ago; the money would be running out, the backlash under way. The Moldovan economy would have collapsed entirely; a pro-Russian government in Moldova would perhaps already be planning to incorporate that country into the emerging Russian-Belarusian-Ukrainian federation that one Russian propagandist hailed, too early, on February 26.

This disaster would not have been confined to Europe. On the other side of the world, Chinese plans to invade Taiwan would be well under way, because Beijing would assume that an America unwilling to defend a European ally, and now totally bogged down in a long-term battle against an emboldened Russia, would never go out of its way to help an island in the Pacific. The Iranian mullahs, equally cheered by Russia’s success and Ukraine’s defeat, would have boldly announced that they had finally acquired nuclear weapons. From Venezuela to Zimbabwe to Myanmar, dictatorships around the world would have tightened their regimes and stepped up the persecution of their opponents, now certain that the old rules—the conventions on human rights and genocide, the laws of war, the taboo against changing borders by force—no longer applied. From Washington to London, from Tokyo to Canberra, the democratic world would be grimly facing up to its obsolescence.

But none of this happened. Because Zelensky stayed in Kyiv, declaring that he needed “ammunition, not a ride”; because Ukrainian soldiers repulsed the first Russian attack on their capital; because Ukrainian society pulled together to support its army; because Ukrainians at all levels were creative in their use of limited resources; because Ukrainian civilians were, and are, willing to endure terrible hardship; because of all of that, we are not living in that ugly, alternate reality.

Because they were inspired by those first weeks of Ukrainian courage, President Joe Biden and the U.S. Congress resisted the temptation of “America First” isolationism and rejected the cult of autocracy that now captivates a part of the American right. The leaders of Europe—with the sole exception of the Hungarian prime minister, Viktor Orbán, one of the chief ideologues of that same cult—also resisted carefully targeted Russian disinformation and blackmail campaigns and agreed to support Ukraine with both military and humanitarian aid. People around the world saw the Ukrainians stand up to a brutal dictatorship, and volunteered their time and their money to help.

Because of everything that all of us did together, Kyiv still stands. Ukrainians still control most of Ukraine. The massacres, the executions, the mass violence planned by the Russians did not take place in most of Ukraine. The legend of Russia’s military prowess has been shattered. China and Iran are roiled by unhappiness and unrest. The democratic world did not collapse but has instead been strengthened. As the Ukrainian president said last night, we “succeeded in uniting the global community to protect freedom and international law.” Zelensky came to Washington to thank Americans on behalf of Ukraine, but in truth, it is we who should be thanking them.

Anne Applebaum is a staff writer at The Atlantic.