The country scored 534 points with its song 1944, about the deportation of Crimean Tatars under Josef Stalin.

Australia finished second with 511 points, while Russia - which was the favourite going into the competition - was third with 491 points.

Joe and Jake, who represented the UK with their song You're Not Alone, finished in 24th place with 62 points.

Jamala is the first Crimean Tatar to perform at the contest and her song caused controversy because of alleged political overtones.

It references the year when Stalin deported almost all of the Tatar ethnic group from its native region of Crimea in what was then the Soviet Union.

The song has angered Russia, which annexed Crimea from Ukraine in 2014, as tension between the two countries grew.

To watch the video of Jamala's performance please follow the link:https://www.youtube.com/watch?v=VCG2rw4ZXTY

There have been calls in Russia for a review of her victory after a prankster told Russian TV that Jamala had admitted to him her song had a political subtext while he posed as an aide to Ukrainian President Petro Poroshenko.

A Russian MP, Elena Drapeko, blamed Russia's defeat on what she called an "information war" and "general demonisation" of her country.

But Mr Poroshenko hailed Jamala's victory and said her performance had been "incredible".

The juries from Russia and Ukraine did not award each other any points. However large numbers of the Russian public voted for the Ukrainian song, awarding it 10 points, while the Ukrainian public gave Russia's entry the maximum 12 points.

Ukraine confounded the bookmakers and Eurovision commentators who had been convinced that Russia - or possibly Australia - would win.

Russia was the bookmakers' favourite for so long, possibly because it was so similar to last year's Swedish winner. Ukraine appears to have slipped past it under the radar.

Simon Bennett, head of the International OGAE Eurovision fan club, told the BBC that former Soviet countries that would "normally vote for Russia" sent it a message by voting for Ukraine instead.

The singer had dedicated the song to her great grandmother who was forced to leave along with a quarter of a million Tatars, as a collective punishment for those who had collaborated during the Nazi occupation.

It had been expected to finish in the top three but in a surprise result beat favourites Russia, which had been angered by the song.

Collecting her award, an emotional Jamala thanked Europe for their votes, adding: "I really want peace and love to everyone."

Speaking about her win backstage after, the singer said: "It's amazing. I was sure that if you talk about truth it really can touch people."

Image captionRussia's Sergey Lazarev had been the favourite to win, but finished in third place

A new scoring system was introduced this year, providing separate scores for each country's jury and public votes, rather than combining them as in previous years.

At the half-way point after the juries' votes had been counted, Australia - which had been invited back to perform after last year's 60th anniversary celebrations - topped the scoreboard with 320 points and a firm lead over Ukraine's 211 points.

But Dami Im's Sound of Silence failed to strike the same chord with the public and was voted the fourth most popular song overall.

The new scoring system highlighted the disparity between the preferences of the juries and the public. 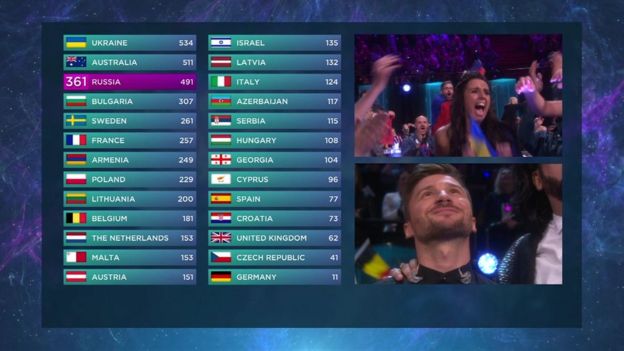 It allowed Poland, which was in penultimate place with seven points from the jury, to leap to eighth when the public's 227 points were taken into account.

It also meant the UK, which had been placed 17th after the jury vote with 54 points, was pushed down to 24th out of 26 when the public's mere eight points were added.

Despite the low finishing position, the UK still scored more points than it has done since 2011 when Blue competed.

Writing on Twitter, Joe and Jake said: "Regardless of the result, our main aim was to make the UK proud. We hope we did that." 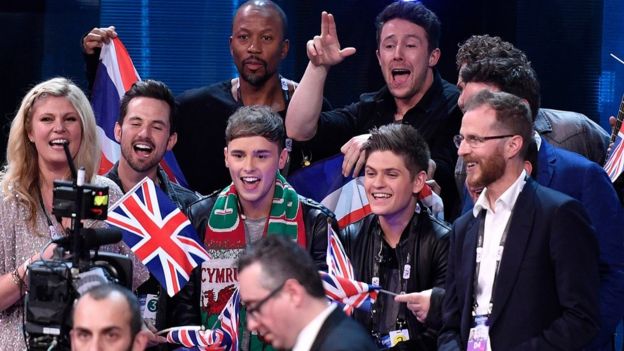 Image captionThe UK's Joe and Jake finished 24th out of 26, but were awarded the maximum 12 points from Malta's jury

Graham Norton, who provided commentary to viewers watching in the UK, paid tribute to his predecessor Sir Terry Wogan during the contest.

He recalled Sir Terry, who died in January, advising him not to drink anything alcoholic until the ninth song had been performed.

"I would urge you at home to raise a cup, a mug, a glass and give thanks to the man who was, and always will be, the voice of Eurovision," he said as the ninth competitor began.

Justin Timberlake performed his new single during the interval of the show, which also included a sketch featuring British actors Sir Ian McKellen and Sir Derek Jacobi as their ITV Vicious characters.