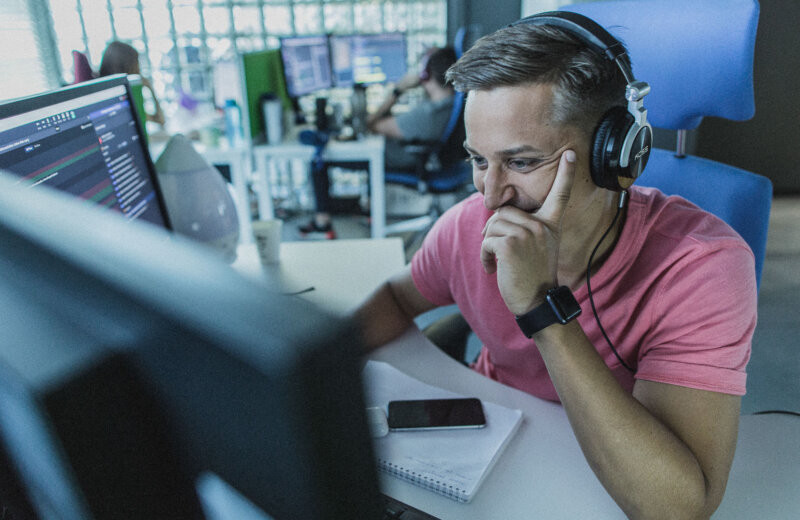 Year founded – 1993
CEO – Christopher Baker
Number of employees – 9,000+
Motto – “To enable talented people to change the world”
What separates you from other companies? – “SoftServe is a global company working with leading corporations from San Francisco to Singapore; it has strong partnerships with Google, Amazon and others, and is part of the so-called ‘top global IT league’, while remaining a company with Ukrainian roots and headquartered in Lviv.”

A slow internet connection and a lot of enthusiasm – that’s how the six young founders of the software development company SoftServe started out.

One of the largest IT companies in Eastern Europe with over 9,000 employees spread out across 38 offices in nine countries, including the U.S., U.K., Canada, Ukraine, Germany, Sweden, Singapore, Poland and Bulgaria — that’s where the company has ended up.

In 1993, while studying at the Rensselaer Polytechnic Institute’s business incubator in Lviv, Yuriy Vasylyk and Igor Mendzebrovski laid out the plan for SoftServe.

They then got together with Taras Kitsmey, Yaroslav Lyubinets, Taras Vervega and Oleh Denys to bring the plan to life.

Within a few years they had already hit it big. In 2000, they opened their first office in the US. In 2003, Microsoft founder Bill Gates presented SoftServe’s RE3W application based on Microsoft.NET they had developed for a real estate company at Microsoft’s annual conference.

Since then, SoftServe has consulted and developed software for companies like Panasonic, IBM, and Cisco. It has over 10,000 IT projects under its belt, and is currently working on nearly 900 projects.

SoftServe’s employees work on a wide range of tasks. The company is mainly focused on developing software in the Internet of things, data science, big data, artificial intelligence and machine learning.

In 2016, SoftServe presented one of most publicized projects, BioLock, a smart system for biometric authentication and monitoring drivers’ health. It’s based on electrocardiogram analysis and uses biosensors integrated into a vehicle’s steering wheel to prevent car thefts and crashes.

SoftServe also developed Tustan AR – an augmented reality application. With it, they were able to create a 3D model of the destroyed Tustan fortress near the village of Urych, Lviv Oblast.

To develop even more software and work more productively, SoftServe is constantly hiring and training new talent. “A characteristic feature of SoftServe is a strong investment in talent development,” the company wrote to the Kyiv Post.

It has a corporate university which has programs both for current employees and students who are then eligible to get an offer from the company after graduating.

“Clients, people, communities – these are the three key values that are most important to SoftServe,” the company wrote to the Kyiv Post. “SoftServe is in a phase of intensive growth.”

In September and October 2020 the company set an employment record – it hired more than 500 new employees in Ukraine.

SoftServe now has more than 700 vacancies in nine countries – apparently, the sky’s the limit for SoftServe in its expansion.