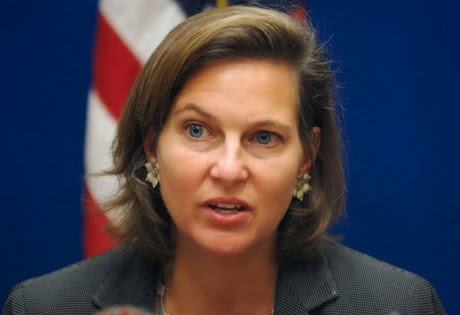 Thank you Chairman Corker, Ranking Member Cardin, members of this committee for the opportunity to join you today and for the personal investment so many of you have made in Ukraine’s democratic, European future. Ukraine still has a long way to go to meet the aspirations of its people, but your bipartisan support, your visits to Ukraine, and the assistance you and your fellow members have provided have been essential to our policy.

Before I begin, let us take a moment to honor the sacrifice of Ukrainian pilot and Rada Deputy Nadiya Savchenko, who was seized in Ukraine in 2014, dragged across the Russian border and unjustly held and tried in Russia.

Today, her hunger strike continues as the court in Rostov again delays announcement of its verdict. Nadiya’s struggle is a stark reminder of the severe pressures and violence Ukraine continues to face even as it works to build a stronger, more resilient country for its citizens.

I thank this Committee for its continued focus on Nadiya Savchenko and all Ukraine’s hostages, and for the passage of Senate Resolution 52. We call on Russia to release her immediately, and return her to Ukraine and to her family before it’s too late.

Like Nadiya, all across Ukraine, citizens are standing up and sacrificing for the universal values that bind us as a transatlantic community: for sovereignty, territorial integrity, human rights, dignity, clean and accountable government, and justice for all. The United States has a profound national interest in Ukraine’s success, and with it, a more democratic, prosperous, stable Europe.

We have stood by Ukraine for more than two years as Russia has sought to stymie its democratic rebirth at every turn – with political pressure, economic pressure, and with unprecedented military aggression and violation of international law. Any set of leaders would be challenged to lead their country in this environment.

Today, however, Ukraine’s European future is put at risk as much by enemies within as by external forces. The oligarchs and kleptocrats who controlled Ukraine for decades know their business model will be broken if Maidan reformers succeed in 2016.

They are fighting back with a vengeance, using all the levers of the old system: their control of the media, state owned enterprises, Rada deputies, the courts and the political machinery, while holding old loyalties and threats over the heads of decision-makers to block change.

Against this backdrop, Ukraine’s leaders have been locked for months in a cycle of political infighting and indecision about how to restore unity, trust and effectiveness in the reform coalition, and reboot the government and its program. Every week that Ukraine drifts, reform is stalled, IMF and international support goes undisbursed, and those inside and outside the country who preferred the old Ukraine grow more confident.

More than 3 months ago, Vice President Biden spoke before Ukraine’s Rada, its President and its Prime Minister and called on all of Ukraine’s leaders to set aside their parochial interests, reminding them: “Each of you has an obligation to seize the opportunity of the sacrifices made in the Maidan, the sacrifices of the Heavenly Hundred. Each of you has an obligation to answer the call of history and finally build a united, democratic Ukrainian nation that can stand the test of time.”

The ability of the United States and the international community to continue to support Ukraine depends upon the commitment of its leaders to put their people and country first. All those who call themselves reformers must rebuild consensus behind a leadership team and an IMF- and EU-compliant program of aggressive measures to clean up corruption, restore justice, and liberalize the economy.

With more unity and leadership, 2016 can and should be the year Ukraine breaks free from the unholy alliance of dirty money and dirty politics which has ripped off the Ukrainian people for too long. Without it, Ukraine will slide backwards once again into corruption, lawlessness, and vassal statehood.

It is precisely because Ukrainians have worked so hard, and come so far already, that their leaders must stay united and stay the course now. And it is because the reforms already taken are cutting into ill-gotten fortunes and cutting off avenues for corruption that the forces of revanche are fighting back.

Here’s the good news: since I last testified before this Committee five months ago, Ukraine has largely stabilized its currency and is rebuilding its reserves; seen some modest growth in the economy; passed its first winter without relying on gas from Gazprom; approved a 2016 budget in line with IMF requirements; passed civil service reform to create competition and transparency; recruited a new corporate board for Naftogaz; broke its own record for greatest wheat exports; stood up an independent Anti-Corruption Bureau and Special Prosecutor; and, begun to decentralize power and budget authority to local communities to improve services and policing for citizens.

The very week in February that the current government survived a no-confidence vote, Rada deputies also approved five critical pieces of reform legislation to stay on track with IMF conditions and advance Ukraine’s bid for visa-free travel with the EU, including laws on:

U.S. assistance has been critical to these efforts. Since the start of the crisis, the United States has committed over $760 million in assistance to Ukraine, in addition to two $1 billion loan guarantees. U.S. advisors serve in almost a dozen Ukrainian ministries and localities and help deliver services, eliminate fraud and abuse, improve tax collection, and modernize Ukraine’s institutions.

But first, Ukraine, President Poroshenko, Prime Minister Yatsenyuk, and the Rada must come together behind a government and reform program that delivers what the Maidan demanded: clean leadership; justice; an end to zero-sum politics and backroom deals; and public institutions that serve Ukraine’s citizens rather than impoverishing or exploiting them.

What Ukraine Must Do

The 2016 U.S. assistance program is designed to support all these priorities. Specifically, we will support Ukraine as it takes steps to:

Of course, Ukraine’s greatest challenge remains the ongoing occupation of its territory in Crimea and Donbas, and its efforts to restore sovereignty in the East through full implementation of the September 2014 and February 2015 Minsk agreements. These agreements remain the best hope for peace, and we continue to work in close coordination with the “Normandy Powers” -- Ukraine, Russia, Germany, and France – to see them fully implemented.

The last time I came before this Committee, Ukraine was in a better place. The September 1 ceasefire had largely silenced the guns, and some Ukrainians were even returning home to Donbas. But today, things are heating up again. In recent weeks, we have seen a spike in ceasefire violations, taking the lives of 68 Ukrainian military personnel and injuring 317.

In February alone, OSCE monitors reported 15,000 violations, the vast majority of which originated on the separatist-controlled side of the line of contact. And, there were more recorded ceasefire violations in the first week of March than at any time since August 2015. And despite President Putin’s commitments to the Normandy powers last October, combined Russian-separatist forces continue to deny OSCE monitors access to large portions of Donbas and to harass and intimidate those who do have access.

At the last meeting of Normandy Foreign Ministers in early March, Ukraine supported concrete steps to pull back forces on the line of contact, increase OSCE monitors and equipment in key hotspots, and establish more OSCE bases deeper into Donbas and on the border. Taking these steps now and releasing hostages will greatly improve the environment for compromise in Kyiv on election modalities and political rights for Donbas.

In the meantime, neither Moscow nor the self-appointed Donbas authorities should expect the Ukrainian Rada to take up key outstanding political provisions of the Minsk agreement, including election modalities and constitutional amendments, before the Kremlin and its proxies meet their basic security obligations under Minsk.

Although the U.S. is not a party to the Normandy process, we maintain a very active pace of diplomatic engagement at all levels with Kyiv, Moscow, Paris and Berlin to facilitate implementation of both the security and political aspects of Minsk, and to help the parties brainstorm solutions.

Here again, with will and effort on all sides, 2016 can be a turning point for Ukraine. If security can improve in coming weeks, if hostages are returned, if the parties can finalize negotiations on election modalities and other political issues, we could see legitimate leaders elected in Donbas by fall, the withdrawal of Russian forces and equipment, and the return of Ukraine’s sovereignty over its border before the end of the year.

We will keep working with Ukraine to do its part to implement Minsk, and working with our European partners to ensure Russia stays under sanctions until it does its part – all of it. And of course, Crimea sanctions must remain in place so long as the Kremlin imposes its will on that piece of Ukrainian land.

Mr. Chairman, Mr. Ranking Member, members of this committee, we knew Ukraine’s road to peace, sovereignty, clean, accountable government and Europe would be difficult and rocky. Today, the stakes are as high as ever.

With strong, unified leadership in Kyiv, 2016 can and should be a turning-point year for Ukraine’s sovereignty and European future. If and as Ukraine’s leaders recommit to drive the country forward, the United States must be there to support them, in our own national interest.

At the same time, we must be no less rigorous than the Ukrainian people themselves in demanding Kyiv’s leaders take their responsibility now to deliver a truly clean, strong, just Ukraine while they still have the chance. I thank this committee for its bipartisan support and commitment to the sovereignty and territorial integrity of Ukraine and to a Europe whole, free and at peace.

I look forward to your questions.