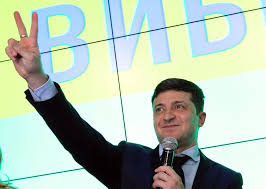 LONDON --- The scale of Zelenskiy’s victory shows that this was not just about a snazzy media campaign funded by dark shadows in the background - this was a clamour for real change. The population want to throw the corrupt old system out - they thought they had with Euromaydan. But within months it was evident the old oligarchs had sneaked back into power.

In the end the result is a sad indictment of President Poroshenko’s failure to address the number one issue for Ukrainians which was the fight against corruption. Arguably an oligarch was the wrong person to lead that fight - he never seemed serious in trying to address the issue. And when he tried - after his poor first round showing - it was already too late.

Huge challenge now for Zelenskiy. He will need to rely on reformers like Daniliuk and the West will have to guide him in the formation of his team as it will be sure lots of dodgy old guard oligarchic elites will make themselves available to work for him.

First question will he want to push for early elections, election reform or constitutional reform.

And who will be the key people in his team. And his is he going to distance himself from Kolomoisky and his cronies.

By Yulia Surkova and Kateryna Choursina, Kyiv, Ukraine, April 21, 2019
(Bloomberg) -- Ukraine’s most-watched comedian won a landslide victory in Sunday’s presidential runoff, an exit poll showed, as voters vented their frustration at the ex-Soviet republic’s lack of progress since a revolution five years ago. Volodymyr Zelenskiy, a 41-year-old TV comic who’s tapped into fury at the political class, got 73 percent of ballots compared with 25 percent for incumbent Petro Poroshenko, according to the survey by three pollsters. His victory owes a lot to his newcomer status and comes despite a campaign that’s been heavy on style with only a sprinkling of policy proposals.

“People are disillusioned with the old elite, which hasn't proved itself after the revolution,” Yuriy Yakymenko, an analyst at the Razumkov Center for Economic and Political Studies in Kiev, said by phone.

“Zelenskiy positioned himself as a populist politician opposed to the old authorities. He and the people are on one side and the old politicians on the other.” Lying on a geopolitical fault line between Russia and the European Union, Ukraine has taken on a global significance since protesters kicked out Kremlin-backed Viktor Yanukovych in 2014 and Russia annexed Crimea. The West has provided billions of dollars in aid, while President Vladimir Putin continues to meddle, aiming to eventually regain influence.
Behind the rise of Zelenskiy, who stars in a TV show about a fictional president, is the kind of anti-establishment zeal that’s engulfed the continent and other parts of the world. He joins other comics-turned-politicians including Italy’s Beppe Grillo and Slovenia’s Marjan Sarec.​
Zelenskiy promised to crack down on corruption, continue working with the International Monetary Fund to remake the economy and help bring peace to eastern Ukraine, where a war with Russian-backed forces persists. But specifics have been hard to come by. Instead, he’s preferred glitz and drama, failing to meet a pledge to announce his picks for key posts before the deciding vote.

‘Break This System’
“I’m not a politician,” Zelenskiy said Friday at a stadium debate with his opponent. “I’m an ordinary person who came to break this system.”

Poroshenko, a 53-year-old confectionery tycoon, has notched some successes in office, securing Ukrainians visa-free travel to the EU, helping create an Orthodox church independent of Russia and beefing up the army in the country of 42 million people. But many reforms have been too slow, while crooked officials and those responsible for the deaths of protesters five years ago haven’t been punished.

Voters also blame him for their economic pain. A lackluster recovery from recession, a currency devaluation and hikes to utility tariffs have hurt. Many have left to work abroad. Poroshenko sought to put a new spin on his campaign in recent weeks, directing a barrage of attacks at Zelenskiy, accelerating steps to get Ukraine’s anti-corruption court up and running, and promising to appoint younger people to his administration. But it wasn’t enough.