US, UKRAINE GET BENEFIT OF TAYLOR’S SERVICE ONCE MORE 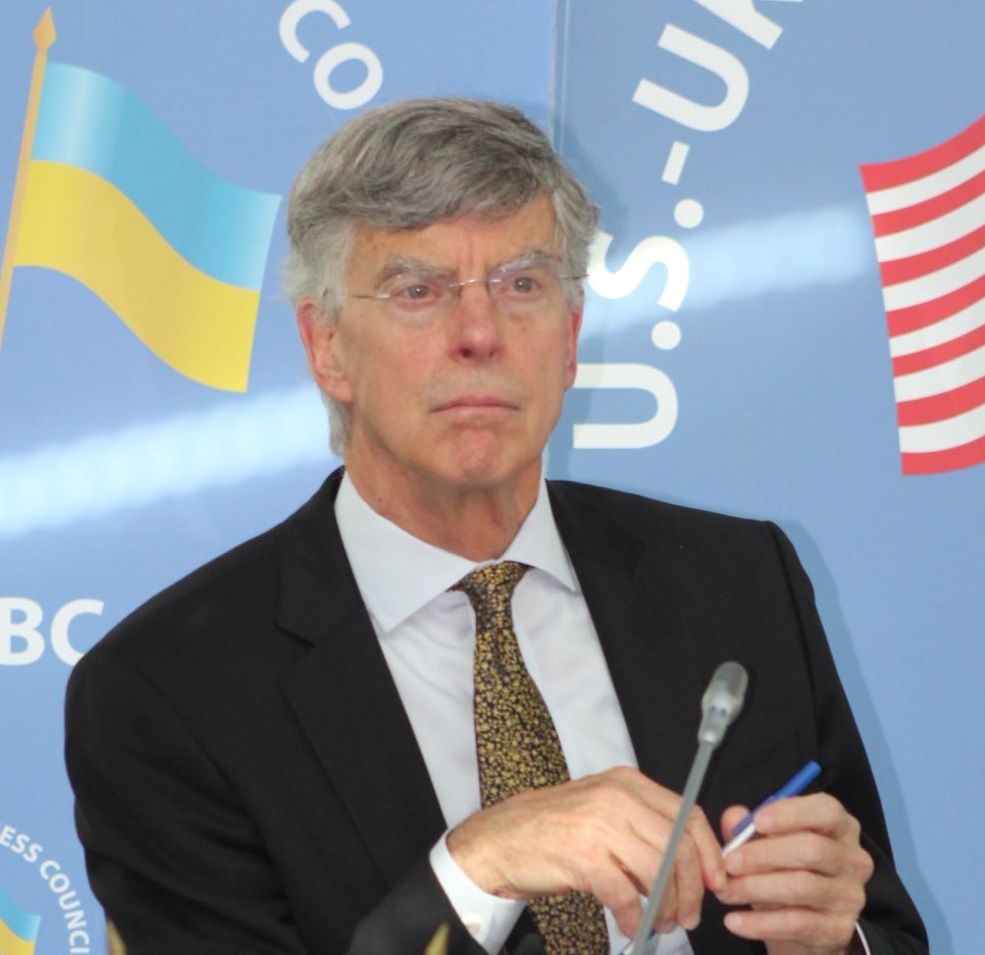 He’s been back on the job in Kyiv only since June 18, but already U. S. Ambassador William B. Taylor is shaping up as the comeback story of the year U.S. Ambassador Willliam B. Taylor, now serving as the charge d'affaires of the U.S. Embassy in Ukraine, speaks with members of the U.S.-Ukraine Business Council on June 26 in Kyiv. (Oleg Petrasiuk)

He’s been back on the job in Kyiv only since June 18, but already U. S. Ambassador William B. Taylor is shaping up as the comeback story of the year.

Taylor served as U.S. ambassador a decade ago, from 2006 to 2009, and is now officially charge d’ affaires, a designation that allowed the U.S. government to swiftly put him in place with no U. S. Senate confirmation vote after Marie L. Yovanovitch left in May.

He is the first of America’s nine ambassadors to Ukraine to make an encore performance. And he’s enjoying every minute of it.

‘I love being back’

“I love being back,” Taylor told the Kyiv Post on July 2, ahead of America’s Independence Day holiday. “You don’t get a chance to come back very often.”

Since returning, he’s made introductions to a new batch of Ukrainian leaders, given a press conference, heard from the business community, and reacquainted himself with embassy personnel.

And, of course, he was putting the finishing touches on plans for the Fourth of July backyard barbeque (taking place on July 5) at the U.S. ambassador’s official residence in the Podil neighborhood.

This year’s theme is an inspired one: The U. S. mission will honor great American and Ukrainian women, past and present, from all walks of life. Taylor credits Yovanovitch and embassy staff with the idea.

After the Independence Day festivities, he will go to Odesa, the southern city of 1 million people, where the USS Carney will dock at the Black Sea port as part of the annual Sea Breeze exercises, part of Western deterrence against Russian dominance of the sea.

Much has changed and much remains the same as when Taylor, 72, left a decade ago.

He served as ambassador when Ukrainians became disillusioned with President Viktor Yushchenko for the unfulfilled promises of the 2004 Orange Revolution that overturned a rigged presidential election. The disappointment was so deep that Yushchenko lost his re-election bid, getting only 5 percent of the vote on Jan. 17, 2010. By the time Taylor left, Ukraine was also several months into a deep recession amid the global financial crisis.
In the intervening decade, Ukraine had its EuroMaidan Revolution to depose Yushchenko’s successor, Viktor Yanukovych, in 2014 and promptly thereafter was invaded by Russia — losing 7 percent of its territory in a war that continues today. 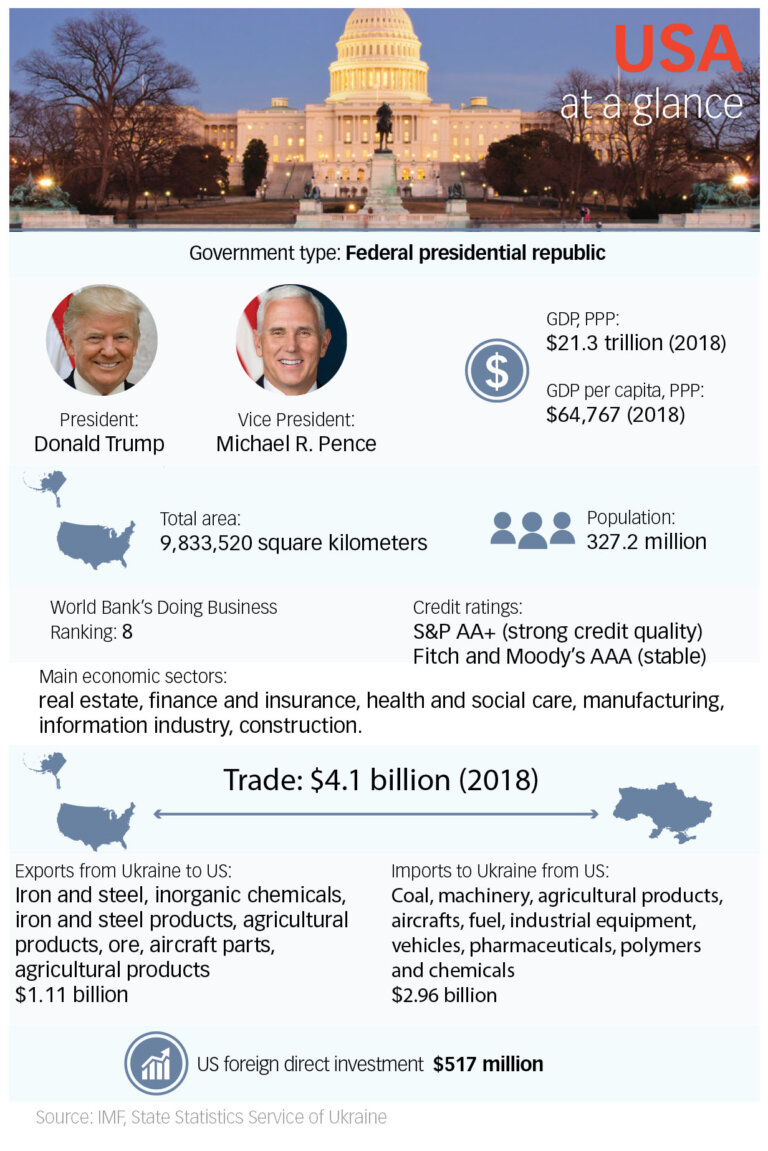 From Washington, D.C., Taylor stayed in touch as executive vice president of the U. S. Institute of Peace, where he wrote and spoke on Ukrainian issues.

While much has changed, other things have stayed the same — “wonderful weather, beautiful Kyiv,” as Taylor noted during a June 25 press conference at America House.

But not all of the constants are good, as Taylor learned from a June 26 meeting with U.S.-Ukraine Business Council members.

In fact, the discussion must have given him a strong sense of déjà vu as business leaders called for the same changes they’ve been seeking unsuccessfully for years: rule of law, de-oligarchization, de-monopolization, privatization, an end to law enforcement’s harassment, creation of a private land market and more.

But he returns with optimism that President Volodymyr Zelensky will deliver on the reform agenda along with a new parliament that will be elected in the July 21 snap election.

He likens the presidential election that Zelensky won in a landslide on April 21 to a third revolution.

“This time people went to the ballot box instead of the streets,” Taylor said. “They had the chance and they took it.”

Despite uncertainties about Zelensky, Taylor senses a new energy created by the 41-year-old president. “It feels new, exciting. It feels like there’s a real chance for progress,” the ambassador said.

Taylor found it encouraging that the president has publicly distanced himself from billionaire oligarch Ihor Kolomoisky, who aired Zelensky’s comedy shows on 1+1 TV, and by his insistence that he will govern independently from any oligarchic forces.

In looking at his appointments and candidates on his party list running for parliament, “I don’t have the sense there’s a strong influence from any of the forces that people worry are going to guide him.”

Taylor says that Ukrainians and Americans can count on him to speak out if he thinks that Ukraine’s leaders are moving away from bedrock democratic principles.

“If the U.S. ambassador here never has a bad word to say about what’s going wrong, then he or she is not doing their job.”

Results matter. “It’s the integrity of the policy which is important,” Taylor said. “People are going to have to go to jail for breaking the law.”

The last two ambassadors, Yovanovitch, who served from 2016 to 2019, and Geoffrey R. Pyatt, who held the post from 2013 to 2016, came under criticism from Ukrainian officials when they attacked the lack of progress in fighting corruption.Prosecutor General Yuriy Lutsenko, who has a dismal record in prosecuting corruption, made false accusations against Yovanovitch shortly after her landmark March 5 speech in which she called attention to harassment of independent media, the failure to create rule of law and other critical shortcomings. Lutsenko accused her of giving him a list of people who should not be prosecuted — only to be forced to retract the bogus accusation later.

There also may be another threat to US-Ukraine relations: President Donald J. Trump and his legal attack dog, ex-prosecutor Rudy Giuliani, have accused the Poroshenko administration of overlooking corruption allegations involving Hunter Biden, the former vice president’s son, and with trying to influence the 2016 presidential election in favor of Trump’s challenger, Hillary Clinton.

Ukrainian officials have said there’s no truth to any of the accusations. They claim Ukraine is being used as a political punching bag to help Trump’s 2020 re-election bid.

Taylor said the U. S. Embassy in Ukraine will not “get involved in domestic politics” either in the United States or in Ukraine.

“We go to great lengths to avoid being seen to be in favor of one presidential candidate or another,” he said.

While many in the Western world see Trump as a lapdog for Russian President Vladimir Putin and other dictators, Taylor suggests looking at the administration’s policy on Ukraine, which “has been very good.”

The Trump administration is supplying Ukraine with lethal weapons, which ex-U.S. President Barack Obama refused to provide. And the president approved tougher sanctions against Russia than before.

“I’m pleased to represent that strong policy in support of Ukraine,” he said.

But the Trump administration works in mysterious ways, even for U.S. ambassadors. For instance, Taylor said he learned from various sources that Trump “apparently raised the issue of (24 imprisoned) Ukrainian sailors with President Putin at some length” during their recent meeting at the G20 Summit in Osaka, Japan.

But Taylor doesn’t know for sure and Trump has a habit of letting the Kremlin take charge of news coverage of his talks with Putin. The Kremlin kidnapped the Ukrainian sailors in international waters in the Black Sea in November. The prisoners join the ranks of more than 100 Ukrainians held by Russia.

‘I would go tougher’

But even though the European Union keeps extending sanctions against Russia, there’s an inclination to forgive and forget what the Kremlin has done. The most glaring example was the June 25 decision by EU nations to readmit Russia as a member of the Parliamentary Assembly of the Council of Europe, even though Putin hasn’t changed any policy — invading Ukraine and violating international laws — that got Russia kicked out of PACE, a human-rights watchdog, in 2014.

“I would go tougher,” Taylor said of sanctions. Russia has violated the standards that have kept the peace since World War II, he says. If there are no rules, “then no nation is safe.”

Taylor also supports the drive to kill the Nord Stream 2 pipeline, which would double Russia’s current undersea capacity to send natural gas to Germany directly, bypassing Ukraine. He takes hope in legislation in Congress that would sanction companies involved in building the pipeline. “It’s not too late, but it’s very late,” he conceded.

While many Ukrainians and Americans alike have said they are happy that Taylor has returned and praise his past service, a few critics recall him as being too gullible in believing that Ukraine’s oligarchs had changed their ways for the better — when clearly some had not.

Asked if he was too naïve then, he replied: “I admit to talking with almost everyone and listening carefully. I would also say that I did think that some people had turned the page on a troubled past and were now part of Ukraine’s future. Some had not. We can debate who fit into which category.”