Washington, D.C. - US President Donald Trump on Monday accepted the credentials of Ukraine's newly appointed Ambassador to the US, Volodymyr Yelchenko, and five other diplomats during a closed-press ceremony at the White House, a spokesperson for the administration said in a statement.

"The President recognized Ambassadors today at a Diplomatic Credentialing Ceremony in the Oval Office," the statement said. Ambassador Volodymyr Yelchenko was one of six diplomats recognized during the event, which is routine for new ambassadors. Similar ceremonies take place periodically throughout the year and are generally not open to the press.

"I presented my credentials from President Volodymyr Zelensky to Donald Trump today. I am honored to represent Ukraine in the USA which always stood firmly in support of our independence. Ukrainians will never forget this. Our strategic partnership is to be enhanced for the benefit of both nations." - Yelchenko posted on his twitter account. 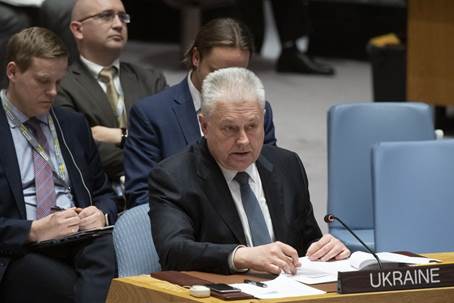 Prior to his posting in Washington, Yelchenko worked in New York, where he represented Ukraine at the United Nations.

BIO: Volodymyr Yelchenko was born in Kyiv in 1959. Volodymyr graduated from the Faculty of International Relations and International Law at Kyiv State University in 1981. Since 1981 he has worked in the diplomatic service of Ukraine.

After 2010 Volodymyr Yelchenko served as Ambassador of Ukraine to the Russian Federation. On 17 March 2014, during the 2014 Crimean crisis, Yelchenko was recalled from Moscow for consultations in regards to situation with Crimea. Since then Ukraine’s highest diplomatic representation in Russia is its temporary chargé d'affaires. On December 9, 2015 Yelchenko was appointed Permanent Representative of Ukraine to the United Nations.

NOTE: USUBC looks forward to working with Volodymyr Yelchenko as the new Ambassador of Ukraine in the USA.