WASHINGTON, D.C. - The U.S.-Ukraine Business Council (USUBC), www.USUBC.org, welcomes TIU Canada as a new member.  TIU Canada CEO Michael Yurkovich and TIU Canada COO Hani Tabsh speak in the two articles below in the Kyiv Post and The Business Ukraine Magazine the about the company’s further plans for the renewables sector in Ukraine and discussed the added investor appeal created by CUFTA.

KYIV-- Amid all the gloom, at least one foreign investor sees some bright prospects for its business in Ukraine.

Scheduling the opening its first 10.7 megawatt solar power plant in the city of Nikopol in Dnipropetrovsk Oblast for January, TIU Canada gave another positive sign that the investment climate in Ukraine has started to improve again since Russia launched its war on the country four years ago.

With the outbreak of the war in the Donbas, foreign companies have naturally had many concerns about coming to the country.

“When we first arrived in 2016 there was a lot of skepticism and not that many western firms were even looking at Ukraine,” Hani Tabsh, CEO of TIU Canada, told the Kyiv Post in a recent interview.

“Now, over the last year-and-a-half that attitude has slowly morphed into — ‘okay, there’re still some things to get worked out, but it’s starting to become more comfortable.’”

Currently Tabsh does not see a serious threat from Russia. 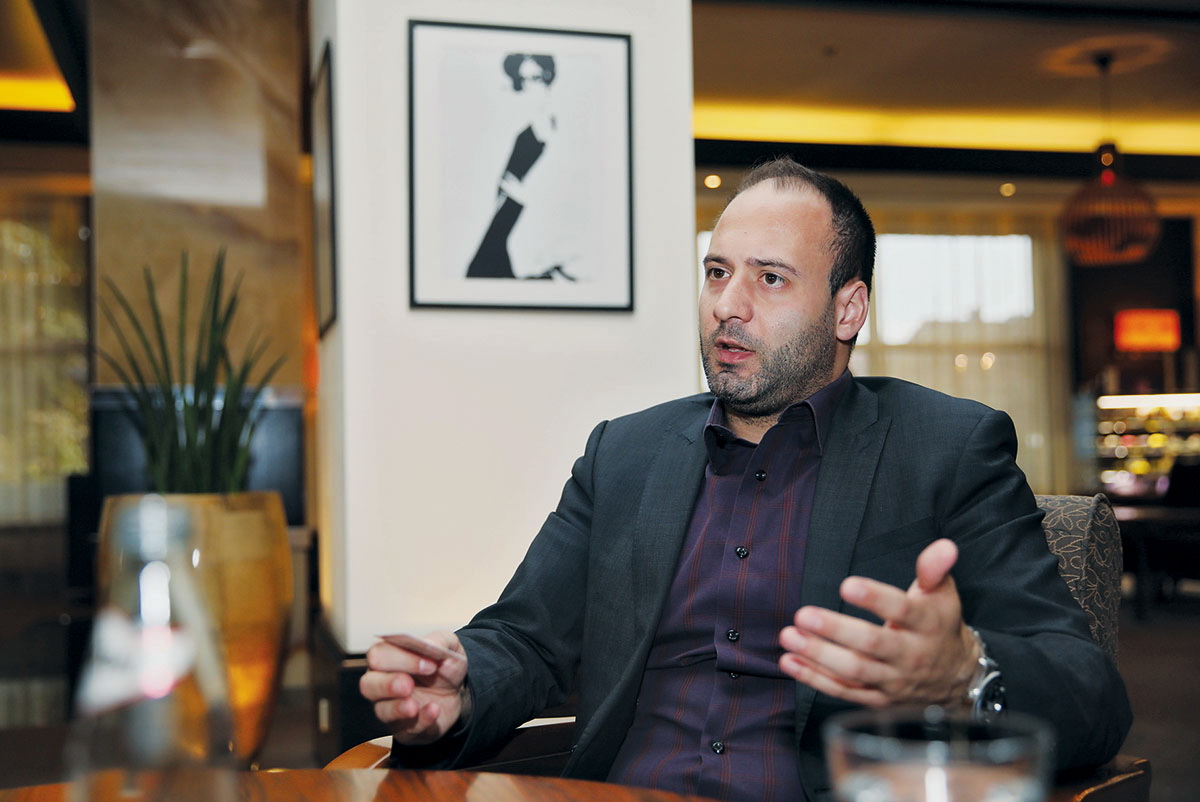 In the picture: TIU Canada's Chief Operating Officer Hani Tabsh speaks with the Kyiv Post on Sept.14 about his company's operations and future plans in Ukraine.

“It feels like there is no conflict at all… It’s a very localized thing, which is important to recognize, but from (the) investor perspective you have to keep an eye on it,” he said.

The sooner the better

Over the past four years, renewables in Ukraine have become one of the most rapidly developing sectors of the economy. Part of the reason is Ukraine’s desire to become as energy independent as possible from Russia, which was previously the country’s biggest gas supplier.

Ukraine has also set an attractive green tariff for sales of power generated from renewables, and there is a high level of transparency for such business activity, making it less susceptible to corruption.

Since 2015, the renewable energy sector has seen generating capacity rise by 766 megawatts, to reach 1.7 gigawatts by the end of the first half of this year, according to the State Agency on Energy Efficiency and Energy Saving, or SAEE. Over the same period more than 740 million euros of investment, both foreign and domestic, have been made in the sector, according to the SAEE.

Just like renewables, Ukraine now has a generally positive, but still very slow, trend of increasing foreign direct investments. From January to August FDI was $1.4 billion, a modest $200 million more than over the same period in 2017, according to the National Bank of Ukraine.

Among renewables the solar business is one of the most popular, as it is easier to get started and requires less initial data than other types, like wind or biogas. “You don’t have to do a one-year wind study, plus the construction time is a lot faster,” said Tabsh.

In 2009 there was not a single solar power plant in Ukraine; in comparison, by the end of 2017 some 184 solar projects were completed, producing some 742 megawatts of electricity altogether, according to the Ukrainian Association of Renewable Energy, or UARE.

The trend is persisting in 2018: The renewable sector is expecting to see the installation of another gigawatt of “green” capacity — 600 megawatts of solar, 300 megawatts of wind, and 50–100 megawatts of bioenergy, according to Irina Krymus, an expert at the UARE. However, despite all the progress in renewables seen in Ukraine, the country is still far from securing its energy independence.

That number is dwarfed by the output of nuclear power plants, and coal- and gas-fired power plants, which generated 91 percent of all of the electricity in Ukraine, or some 141,000 million kilowatts over the same period.

Like the other major players on the Ukrainian renewable market, TIU Canada doesn’t want to stop at a single solar power plant in Nikopol. It plans to build five new solar power plants in Ukraine, investing 94 million euros, according to Ivan Bachynsky, the company’s communications representative. “We want to have a portfolio of 50–100 megawatts if not larger as we grow over the next year,” added Tabsh.

Since Mykolaiv Oblast has one of the best locations for solar power generation in Ukraine, another solar plant near the village of Kalynivka is already under construction. It will cover 20.2 hectares with a capacity of 13.5 megawatts. The plant will help reduce Ukraine’s carbon dioxide emissions by 18,212 tons per year, according to Bachynsky.

According to Tabsh, the company is in the final stage of negotiations and completing due diligence for two additional solar projects in that same region. “And as soon as we’ve got those closed and meet all the final requirements, we’re going to start constructing them this fall,” he said.

TIU Canada doesn’t just have business ties with Ukraine — there is much broader interest in cultural exchanges at the company. For instance, on Sept. 10, two mayors — Nikopol’s Andriy Fisak and Gerald Aalbers of the Canadian city of Lloydminster — signed a historic agreement between their two cities.

The Canadian investments in Nikopol were the motivation for signing this first major non-military cooperation agreement between Canada and Ukraine in 35 years. “We’re not happy simply to put money into a community, walk away, and just collect income that comes from that type of investment,” said Tabsh. “Our company wants to be actively involved within the communities in which we’re investing.”

Since Lloydminster and Nikopol have some similarities in terms of industries and population size, the cooperation could produce real growth in trade as well as opportunities in education, art, and sports between them, according to Tabsh. “There will be cultural exchanges hopefully between the two cities after the meeting of the two mayors, and we’re looking to see how it will develop and will support it as quickly as we can,” said Tabsh.

KYIV-- TIU Canada is one of the first Canadian companies to have taken advantage of the opportunities presented by the recently inked Canada-Ukraine Free Trade Agreement (CUFTA). The Canadian company’s first Ukrainian solar energy plant, which is located in southern Ukrainian city Nikopol, began construction in summer 2017 and started operations in January 2018.

TIU Canada has already invested in the region of EUR 11 million in Ukraine and intends to break ground on their next phase of solar projects in Ukraine this summer, in addition to the existing 11mw power plant in Nikopol. Officials say plans may evolve further dependent on Ukraine’s market conditions and the political outlook in the country.

The first TIU Canada solar plant began operations in January 2018 in the southern Ukrainian city of Nikopol. Has performance so far lived up to your expectations?

Yes, we are happy and are ahead of expectations.

What are your plans for further investments in the Ukrainian renewables sector?

We will invest what we promised in 2018 and will then revisit the market in the first half of 2019. We may do a few more projects before the renewable tariffs are reduced and the sector is shut down for investment.

In the picture: The TIU Canada solar plant in southern Ukrainian city Nikopol began operations in January 2018 and is one of the largest international investments to date in the Ukrainian renewables industry

TIU Canada is a pioneer among a growing number of international investors moving into the Ukrainian solar energy sector. What makes the Ukrainian renewables market an attractive investment option?

There are a number of factors converging to make the sector appealing for international investment. These include solar conditions in Ukraine, the sophistication and skill of Ukrainian engineering companies, access to international logistics hubs, and the power supply deficit in the wholesale energy market that Ukraine must address in order to attract manufacturing and technology jobs.

What role did the advent of the Canada-Ukraine free trade agreement play in your thinking when you first opted to enter the Ukrainian market, and how important a factor will it be going forward?

Canada actually had a free trade agreement with Ukraine in place since 1993, however this only covered grains and cereals. The CUFTA (2016) expanded the areas of interest and cooperation so that institutional investors could look at the rest of the Ukraine economy on an “apples to apples” basis with other global investment opportunities. The signing of the CUFTA subsequently led to Israel, Dubai, Croatia, China and Japan starting or accelerating their own free trade dialogues with Ukraine, so we are pleased with how CUFTA has put Ukraine on the radar screen for both governments and institutional investors.

We have seen a significant increase in institutional interest in Ukraine since CUFTA, by a clear double in terms of new names and research inquirers into the country’s economy and new venture companies, particularly by venture capital and pension funds. For Ukraine’s currency and inflation to stabilize, foreign investment is essential. It is the key to making the country great.

Your investment in Nikopol is one of the largest FDI projects in the region. What do you see as the key impacts for the local community?

The impacts on Nikopol are numerous. These include generating tax revenues that can help support civic redevelopment and infrastructure improvements. Our investment provides a case study and reference for subsequent joint ventures and foreign direct investment. TIU Canada’s presence also creates seasonal jobs during construction and permanent positions post-construction including in the fields of electrical engineering and civil engineering, which can act as gateway jobs for highly paid labor, increasing the average wage in Nikopol and improving the wealth of the community.

Based on your experience of working with regional Ukrainian authorities on a major investment project, what tips would you share with Canadians who may also be considering investments in Ukraine?

Make sure you understand the local community needs and address their concerns about your project early and clearly. We were blessed to have good bench strength in this area, with a strong government relations team and experienced advisers who worked for 40 years on oil issues with “First Nations” in Alberta. Applying First Nations case studies to Ukraine is a very important lesson, as Ukraine has a right to play a role in community development. Due diligence is also key.

Any potential investor must be certain all contracts and land titles can be proven. Do not skimp on legal support and be sure counterparts are comfortable moving law to English courts. Be sure you have your money and check that the banks you work with are sound. Liquidity and hard currency are important factors in your business strategy.

Local talent can play a vital role. Be sure you can verify all certificates and local contractor track records together with education qualifications. Ethics and accountability to investors are important, as Canadian foreign investors are held to Canadian standards. Do not compromise in order to get the deal done.