Why Russia Must Lose 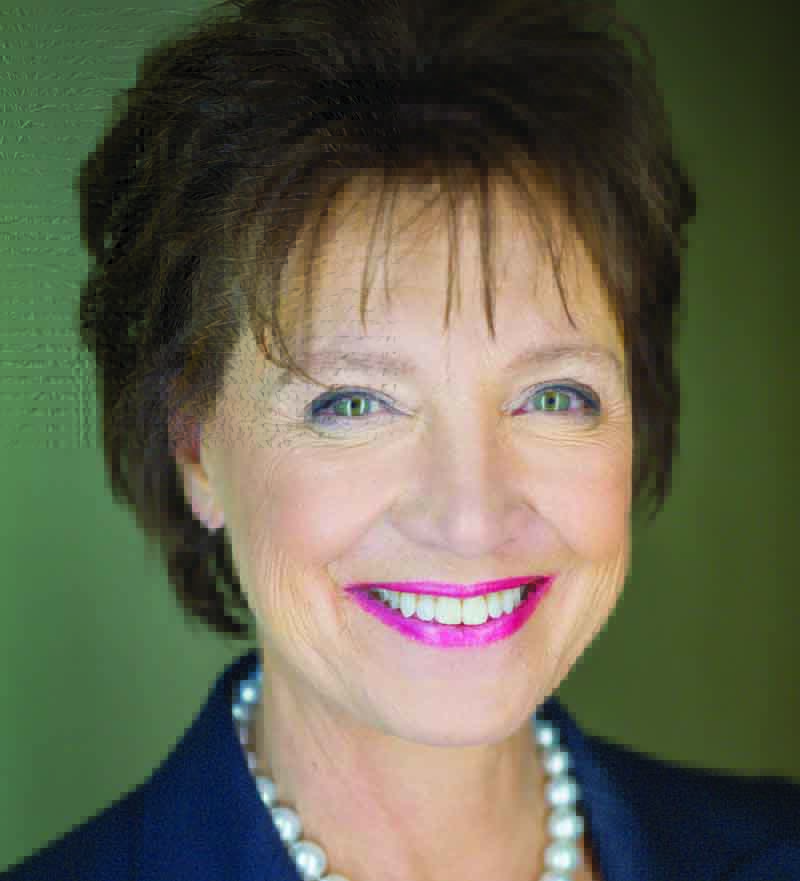 History will show that Vladimir Putin lost the war against Ukraine before it began when he published “On the Historical Unity of Russians and Ukrainians” in July 2021 which denied the legitimacy of the Ukrainian nation. It was a declaration of genocide, not war, and after the invasion, faced with extermination, Ukrainians immediately mobilized. Millions of women, children and elderly evacuated and the remaining millions joined the war effort. This is because people threatened with extermination may not be the best soldiers, but they are willing to do anything to protect themselves and their nation. This is Ukraine’s strategic advantage against a superpower, and the civilized world increasingly realizes that the barbaric Russian regime must be defeated. 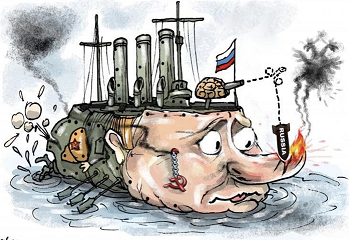 Before the invasion, a Ukrainian general accurately warned that “every window will shoot” once Russians crossed the border. That is exactly what happened. As their cities are reduced to rubble, and schools and children blown up, they continue to overwhelmingly support pushing Russian troops completely out of their land. In fact Putin’s declaration of genocide, aimed at terrifying them into submission, has backfired and with every catastrophe, war crime, or attack on civilian targets Ukrainian resolve strengthens. “We will fight to the end,” says Ukraine’s President Volodymyr Zelensky, a exceptional communicator who has won the “infowar” against Russia and garnered the full support of the European Union, NATO and the United States.

As the country of 42 million pushes back against a military superpower, its allies have provided weapons, aid, financing and sanctions that are damaging Russia’s economy, its oil revenues and war machine. Unfortunately, there are appeasers such as President Emmanuel Macron of France and Putin patsy Henry Kissinger, former U.S. Secretary of State, who have stated that Ukraine should consider territorial concessions because “Putin must not be humiliated”. But given Putin’s atrocities, such remarks are unconscionable.

Putin’s army must be defeated and his diabolical regime destroyed — not only for Ukraine’s sake but for the region’s and the world’s. As Peter Wallison, former White House Council in the Reagan administration, recently wrote: “Obviously, the United States has no way of removing Putin from his command of Russia and its military. The only realistic means to achieve this is to drive him out of Ukraine – depriving him of any semblance of a victory – and thus embolden those forces in Russia, whatever they are, that can somehow remove him from power. It is not clear, of course, that any group in Russia can accomplish this, but if Putin wins the smallest of victories in Ukraine, even this possibility will be erased.”

Put another way, any territorial gain by Russia in Ukraine would represent a Russian victory and guarantee Putin’s continuing tenure as its dictator, thus threatening Europe forever and emboldening China or other autocracies to ride roughshod over international laws. The only solution is to kick Russia out of Ukraine altogether to undermine his support at home and to rid the world of a dangerous dictator.

Unfortunately, calls appeasement will multiply as the conflict continues and appears to be turning into a war of attrition. Moscow retreated from Kyiv and now its army inches along in the east and south by bombing areas indiscriminately with long-range artillery in order to slowly advance. In four months, it has increased its occupation from 7.5 percent of the country (acquired in 2014) to 20 percent, the size of West Virginia. But Ukraine’s armed forces and militias have held the line heroically and effectively used unconventional warfare to damage their enemy.

A campaign of assassinations of Russian generals has created chaos within its ranks, and Ukraine has harnessed technology in creative ways. The Starlink satellite network quickly replaced the country’s telecoms system destroyed by the Russians. Drones have successfully counterattacked. Ukraine has also repurposed its sophisticated government app or “chatbot” — launched before the war to link all citizens to government services — by converting it into a “tip line” that allows Ukrainians to report to their military the locations and movements of Russian tanks, supplies, or troops. Once identified, these enemy strongholds are destroyed by guerrillas, drones, and short-range artillery, resulting in sizeable Russian casualties. In June, President Zelensky said more than 30,000 Russian servicemen had died which is “more than the Soviet Union lost in 10 years of the war in Afghanistan”. By contrast, outgunned and outmanned Ukraine is losing between 60 and 100 soldiers a day. 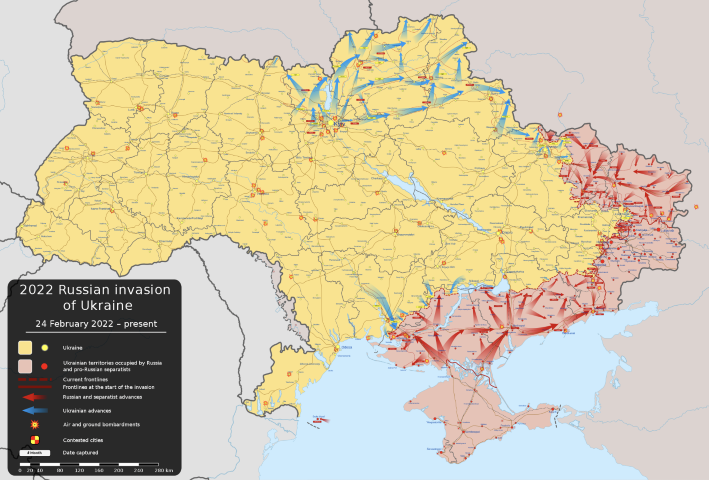 Russian occupation as of June 4, 2022 after more than four months

Anders Aslund, a Swedish economist and author of books on Putin and Eastern Europe, believes Russia cannot win because its military is in disarray, because Putin is isolated and because he has not formulated a heroic or worthy goal to justify his war to the Russian people. “He has not carried out mass mobilization and is unlikely to do so, because that would hit the sons of the middle class in the big cities, who would be politicized against Putin. Few contract soldiers or mercenaries want to fight. Meanwhile at least a dozen military registration offices have been set on fire and there are steady reports of small-scale mutinies,” he added. “And the Russian economy struggles. The standard forecasts are a GDP decline of 10 to 15 percent this year. I would guess 15 to 20 percent. At some point, the Russian people may protest.”

Military and geopolitical expert Pavel Baev, a Russian-Norwegian, says Russia cannot beat Ukraine. “Neither Russia’s gradually degrading economy, nor the badly damaged military machine can sustain the protracted war of attrition, and this is the course Putin is committed to. His only hope is that Ukraine will break under the pain of bombing, but he seems unable to understand the unbreakable will of the Ukrainians to uphold their state.”

The new long-range American and British weapons en route to Ukraine will represent an even greater challenge for the Russians. Professor of Military History Frederick W. Kagan wrote in Time Magazine: “The Russian military certainly cannot sustain the current offensive long enough and far enough to destroy the Ukrainian military or seize other major cities…If Ukrainians retain their will to fight and their justified confidence in their ability to liberate much if not all of their occupied territory, and if the West holds to the commitment that President Joe Biden recently articulated in his New York Times op-ed to support Ukraine in that aim and to refrain from pushing Kyiv to make concessions, then there is every reason for hope.” 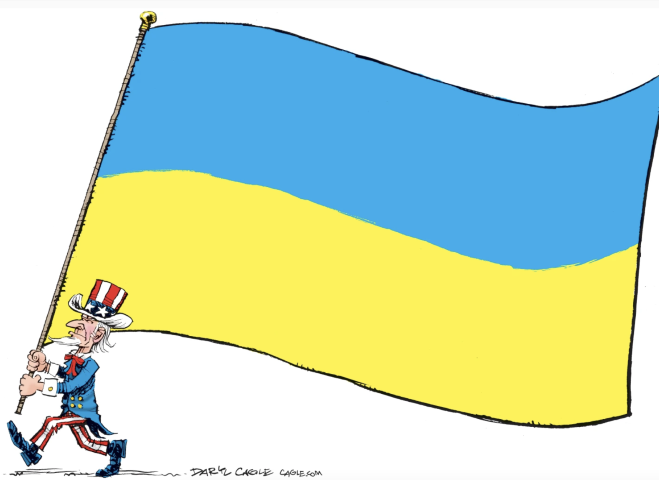 Some believe a turning point is nigh because Ukraine will capitalize on its new cache of weaponry and the ongoing sanctions will increase unrest inside Russia. Some four million Russians have left the country since the invasion, according to official figures; protests continue there with thousands jailed and Putin will be unable to replenish his forces with conscription or replace equipment due to tech export bans against Moscow. Aslund also believes reports that Putin is ill and believes that it’s possible that disgruntled security, military and intelligence elites may one day stage a coup d’etat.

It’s also interesting to note that Putin shows signs of weakness. He has established two red lines that have been ignored by NATO members without repercussion such as providing lethal weapons to Ukraine and letting Finland join. The next test will be the delivery of American and British long-range artillery, which will neutralize Russia’s only military advantage. To pre-emptively placate Putin, the U.S. made Ukraine promise these will not be used to bomb targets inside Russia. But the reality is that they will do so when necessary.

Besides, as Aslund points out: “It is incomprehensible how the U.S. and other Western nations can insist on Ukrainian forces not attacking the scores of bases in Russia, from which the Russians bomb Ukraine. Ukraine must have the full right to defend itself against its attacker. The United Nations Charter (Article 51) states: `Nothing in the present Charter shall impair the inherent right of individual or collective self-defence if an armed attack occurs against a Member of the United Nations, until the Security Council has taken measures necessary to maintain international peace and security.’”

Frankly, the plucky Ukrainians will do whatever is necessary to survive and vanquish Russia and the civilized world will continue to help. Apart from a handful of Chamberlains, everyone agrees that Russia must lose the war it began without justification.

NOTE: Diane Francis is a US-born Canadian journalist, author and editor-at-large for the National Post newspaper since 1998.She is a Non-Resident Senior Fellow at the Atlantic Council in Washington DC, specializing in Eurasia policy and political issues. Since 2021, she is publishing a Substack newsletter. Diane Francis, a Veteran columnist writes about power, money, tech, and corruption in America and the world at dianefrancis.substack.com.

NOTE: This commentary and analysis article by Diane Frances is distributed for information purposes only.

LINK: Why Russia Must Lose