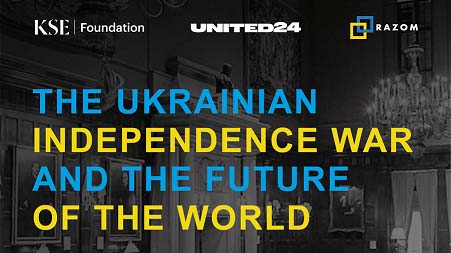 The September 17 Conference will consist of two parts:

6:30pm - 11pm. Charity dinner "The Independence War in Ukraine: the Present and Future of the Country."

You can register for the Conference and the dinner here: https://kse.ua/ua/events/?eid=9357

The event aims to bring some of the greatest minds and key political figures together to discuss the implications of the war in Ukraine for global security, economy, energy security, and food security. It will also celebrate the spirit and resilience of the Ukrainian people.

All raised funds will go towards medical and educational humanitarian projects in Ukraine. Our objective is to raise funds for the reconstruction of a medical clinic in Makariv, Bucha region, that has been destroyed by the russian army. The cost of reconstruction is USD700K.

Makariv, the area close to Bucha in the Kyiv region that was occupied and devastated by the Russian troops.

The Conference and Dinner will be hosted by Dr. Tymofiy Mylovanov, KSE Group President and alum, Minister of the economy of Ukraine 2019-2020, and current advisor to the Office of the President of Ukraine.

Makariv, the area close to Bucha in the Kyiv region that was occupied and devastated by the Russian troops.

The host is the Kyiv School of Economics, incorporated in Washington DC as 501 (c) 3 charity and holds exempt organization certificate for the state of New York. All donations made to this charity during the event are tax-deductible in the US. A part of the cost of the ticket, which will be listed on the receipt, is also tax-deductible.

The conference and charity dinner are co-organized by the Kyiv School of Economics (the top Ukrainian university, economic think tank, and educational charity), Razom for Ukraine (a leading US-Ukrainian charity), and United24 (the fundraising platform initiated by the President of Ukraine).

Since the beginning of the Russian invasion, these organizations have raised and deployed more than $200M in support of Ukraine. The U.S.-Ukraine Business Council (USUBC), www.USUBC.org serves as an information partner.

You can register for the Conference and the Charity Dinner here: https://kse.ua/ua/events/?eid=9357.

To see the full version of the Conference presentation, please click here: /files/KSE-Conference-9-17-2022-General-Info.pdf

The charity dinner followed by a charity auction will celebrate the resilience and the spirit of the Ukrainian people. It will feature Ukrainians who will share their stories of overcoming the challenges of the war, resisting the Russian invasion, and maintaining and developing a democracy during a war.

The charity auction will have items such as a victory dinner ticket organized by the President of Ukraine and the only publicly available piece of Mriya, the largest world aircraft produced in Ukraine, that was destroyed in Hostomel by the Russian paratroopers in the first days of the invasion, art created by Ukrainian artists and, also, children, at the beginning of the war, a piece of one of the first destroyed Russian helicopters Alligators, close to Irpin during the battle for Kyiv, and the collection of all stamps issued in Ukraine since the invasion.

Andriy Yermak (online), Head of the Office of the President of Ukraine

Mykola Solskyi (online or offline), Minister of Agrarian Policy and Food of Ukraine

H.E. John Herbst (offline), senior director of the Atlantic Council’s Eurasia Center, US ambassador to Ukraine from 2003 to 2006. He most recently served as director of the center for complex operations at National Defense University. He has received the Presidential Distinguished Service Award, the Secretary of State’s Career Achievement Award, and the State Department’s Distinguished Honor Award.

Dr. Jeffrey Sonnenfeld (offline), a former full-tenured professor at Emory's Goizueta Business School for a decade and a professor at the Harvard Business School for a decade, and is currently the senior associate dean of leadership programs as well as the Lester Crown Professor in the Practice of Management for the Yale School of Management, as well as founder and president of the Chief Executive Leadership Institute, a nonprofit educational and research institute focused on CEO leadership and corporate governance. Jeffrey leads the research group at Yale that monitors the exit of international companies from the Russian markets.

H.E. William B. Taylor (offline), Vice President, Russia and Europe at the U.S. Institute of Peace. In 2019, he served as chargé d’affaires at the U.S. embassy in Kyiv. During the Arab Spring, he oversaw U.S. assistance and support to Egypt, Tunisia, Libya and Syria. He served as the U.S. ambassador to Ukraine from 2006 to 2009.

Dora Chomiak (offline), President, Razom for Ukraine, a native New Yorker, has been active in the Ukrainian-American community in the United States since the 1980s.

Dr. Roger Myerson, Nobel Prize Winner in Economics '07; David L. Pearson Distinguished Service Professor of Global Conflict Studies at The Pearson Institute for the Study and Resolution of Global Conflicts in the Harris School of Public Policy, the Griffin Department of Economics, and the college at the University of Chicago; and the chair of the KSE University Academic Board.

Dr. Yaroslav Hrytsak, Ukrainian historian, professor of the Ukrainian Catholic University, Director of the Institute for Historical Studies of Ivan Franko National University of Lviv (Ukraine); First Vice-President (1999-2005) of the International Association of Ukrainians; a member of the supervisory board of Harvard Ukrainian Studies.

Igor Lutsenko, KSE alum, serves in intelligence (drone surveillance) on the front lines in the East and prior to that, fought in the Battle of Kyiv. In 2014, Igor was among the leaders of the Revolution of Dignity. He survived the kidnapping by the pro-Russian death squad (his partner did not) and was later elected to the Ukrainian parliament.

Kateryna Chernohorenko, Leader of the "Army of Drones" project, Ukraine

Andrii Bohun, Brigadier General, Ministry of Defence of Ukraine, Head of the department of UAV

Dr. Tymofii Brik, Rector of KSE University, member of PONARS and VoxUkraine, a chairman of the supervisory board of CEDOS, and an Executive team member at SITADHub; awarded the title of the best young sociologist of the year by the National Scientific Academy of Ukraine

NOTE:  You can register for the Conference and the Dinner here: https://kse.ua/ua/events/?eid=9357