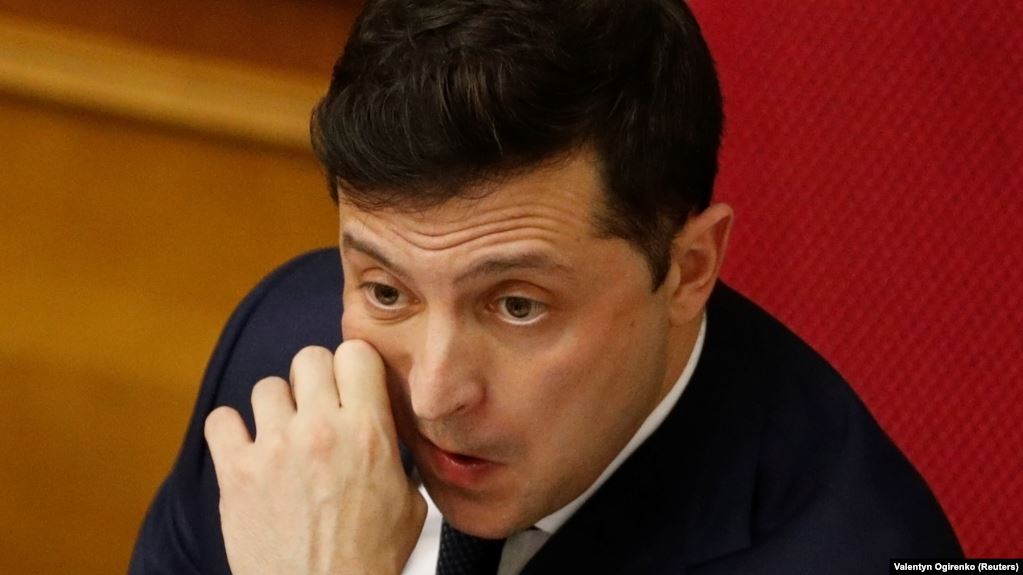 When Volodymyr Zelenskiy, a popular comedian with no political experience, won Ukraine's presidential election in April, many questioned whether he could stand up to the powerful oligarchs that have wielded power in Kyiv from behind the scenes for decades.

After all, his fairy-tale win was backed by Ihor Kolomoyskiy, a billionaire reportedly under U.S. investigation for money laundering.

But when Zelenskiy's party won a landslide parliamentary victory just three months later, ushering in independent Ukraine's youngest-ever government, many expressed optimism that the 40-something president would finally push the country down the difficult and elusive path of reform that could lead to greater integration with the West.

His initial words and actions conveyed that message, enabling him to win the confidence of many U.S. and European officials and business leaders. But that initial impression now appears to be waning amid signs that the rich and powerful are returning to their old-guard role of stifling change.

Ukraine's parliament -- on the back of support from Zelenskiy's Servant Of The People party and parties with close ties to the country's elite -- dismissed Prosecutor-General Ruslan Ryaboshapka on March 5, a day after the president sacked most of his government in a major reshuffle.

Honcharuk's dismissal came just days after he sought to replace the Kolomoyskiy-backed manager of CentrEnergo, a state-owned company and one of the nation's largest power producers. Zelenskiy opposed the management reshuffle.

Gone too from the cabinet are Finance Minister Oksana Markarova, who negotiated loans with the International Monetary Fund (IMF), and Economy Minister Tymofiy Mylovanov, who had been leading the controversial agricultural land-market reform that is now stalled in parliament.

Tregub said the outgoing ministers had no prior affiliation with oligarchs, describing it as a departure from Ukraine's political history that is now being reversed.

"Nobody is happy about the government changes. Especially given who came to replace the former ministers. And given that everything happened so abruptly and way too fast," said Tregub.

Ukrainian prosecutors have long been seen as being at the root of the nation's endemic corruption, using their law enforcement power to settle scores for their oligarch backers.

The appointment in August of Ryaboshapka, a lawyer and anti-corruption crusader, was widely seen in the West as a break from the office's reputation of doing the bidding of Ukraine's oligarchs.

Ryaboshapka, who quit Ukraine's National Agency for the Prevention of Corruption in protest in 2017 over alleged cover-ups, was overseeing "one of the most comprehensive and meaningful reform efforts in the nation's civilian security sector in years," the EU Advisory Mission Ukraine said in a March 4 statement.

In explaining his decision to reshuffle the government, Zelenskiy blamed Honcharuk for failing to halt an industrial slump and for not meeting tax-collection targets. Ukraine needs "new brains and new hearts in the government," Zelenskiy told parliament on March 4.

However, analysts have suggested the reshuffle was driven by Zelenskiy's falling approval rating, which has tumbled from a high of about 73 percent to just below 50 percent.

Mykhailo Minakov, the senior adviser on Ukraine for the Wilson Center's Kennan Institute, offered additional reasons. He said in a March 5 report that the new cabinet ministers are more aligned with the goals of Zelenskiy and his new chief of staff Andriy Yermak, who replaced Andriy Bohdan in February.

Minakov also said the dominance of Western-leaning ministers in Honcharuk's cabinet "was not acceptable" to many Ukrainian politicians.

Morgan Williams, the president of the U.S.-Ukraine Business Council, told RFE/RL that the members of his lobby group highly rated the efforts of Markarova and Mylovanov to improve the Ukrainian economy and investment climate. He said members of the council are "alarmed and confused" about the reshuffle and the impact it will have on reforms.

"The business community thought 2020 was going to be a very stable year with the passage of major reforms. Many members were counting on it to justify expansion of their businesses in Ukraine, and now it's all on hold," Williams said. "Why was this necessary?"

Zelenskiy's government reshuffle comes amid an aggressive push to implement key economic and political reforms, including judicial reform, the creation of a land market, the privatization of state-owned assets, and the cleaning up of the defense and banking sectors.

Ukraine is one of only six countries, including Cuba and North Korea, that does not allow its citizens to buy and sell land. Economists say land reform would spark a tidal wave of investment in Ukraine and drive economic growth over the coming years.

Zelenskiy is not the first to address the issue, being the third Ukrainian president in the last 15 years to be elected on a reform mandate.

Viktor Yushchenko and Petro Poroshenko, who won the presidential elections in 2004 and 2014, respectively, failed in some of their attempts to carry out major reforms due in part to opposition from oligarchs.

Ukraine's failure to reform since the collapse of the Soviet Union has left its people among the poorest in Europe. At the dawn of the 1990s, Ukraine's economy was roughly the same size as Poland's. Today its $130 billion economy is less than a quarter the size of its smaller neighbor, according to World Bank data.

The U.S. Department of State has said it is looking forward to working with the revamped government, but called on the country to stick to its reform agenda. The United States has been a major supporter of Ukraine financially and militarily over the past six years.

"We urge the new Ukrainian cabinet to demonstrate its continued commitment to reform by moving forward with the critical steps necessary to further the country's development, including strengthening the rule of law and combating corruption. The strongest signal Ukraine can send that it remains committed to its reform trajectory is to secure a new IMF [International Monetary Fund] program," a State Department spokesperson said in a statement to RFE/RL.

Kyiv is seeking to finalize a long-delayed $5.5 billion loan program with the IMF seen as crucial to economic stability and investor confidence.

The IMF program requires Kyiv to carry out legislation that will prevent oligarchs from recovering banks the state nationalized, or from receiving compensation. Kolomoyskiy is seeking to recover PrivatBank, which the state bailed out with a $5.6 billion infusion of cash.

Shmyhal, the new prime minister, has said he will continue the reform agenda. In a Facebook post on March 5, he said the government reshuffle "means that we want even better and faster reforms in Ukraine."

The new cabinet will continue "prudent fiscal policy and constructive cooperation with the International Monetary Fund and other creditors of Ukraine," he added.

However, several analysts have pointed out that new Finance Minister Ihor Umansky has been critical of the IMF in the past and has no experience of working with the international lender.

"The composition of the new cabinet -- which failed to include the previous government's key market-orientated ministers -- and [the] little policy detail offered by the new PM thus far are raising questions about the continuation and quality of reforms despite Zelenskiy's pledge of no reversal," Dragon said in a March 5 note.